“The discrepancy between what was expected and what has been observed has grown over the years, and we’re straining harder and harder to fill the gap.” -Jeremiah P. Ostriker

When it comes to the Universe, and the structure in it, from galaxies to groups to clusters to the grand cosmic web on the largest scales, you simply can't account for it all without dark matter.

But in principle, you might not need dark matter to do it; you might be able to modify the laws of gravity instead to take care of it. Imagine a Universe devoid of dark matter, but where a new theory of gravity could account for all the observations we see. This idea -- called MOND in general (for MOdified Newtonian Dynamics) -- has been dark matter's leading competitor. Just a decade ago, a relativistic formulation of MOND known as TeVeS became all the rage. 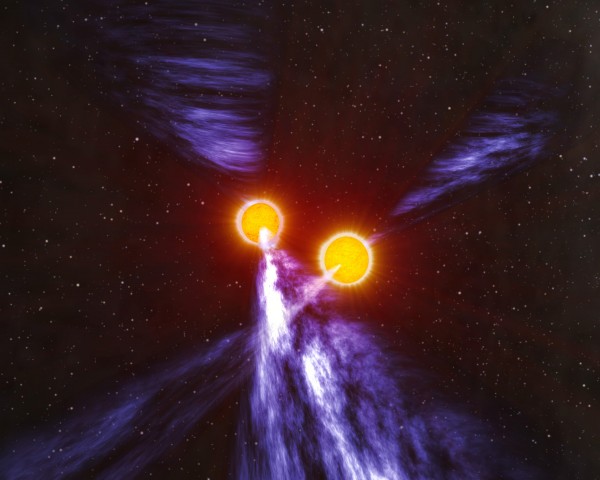 And thanks to new observations, TeVeS has been refuted! Go read the whole thing.

Ethan, How do we know that dark matter is definitely not baryonic? I missed that.

Ethan, fascinating that observations rule out TeVeS. Are other modified gravity theories ruled out (if any others are possible)?

As usual Ethan, lots of graphs and pretty pictures with no explanation. You may be right but for those of us who are not familiar with the field we just have to take your word for it.

Bob, if your usual experience here is composed of unconvincing and incomplete explanations, then your continued attendance is a bit puzzling.

I read the article. It talked about stuff I know about, no problem. But then all of a sudden at the end it basically said "some guy says this rules out TeVeS". I'm not a MOND fan, and I don't root for TeVeS, and I think highly of Michael Kramer et al, but I didn't find this convincing. Besides, IMHO the number one competitor for dark matter is general relativity. In the Foundation of the General Theory of Relativity Einstein said "the energy of the gravitational field shall act gravitatively in the same way as any other kind of energy". This is spatial energy. It has a mass equivalence and a gravitational effect. And it isn't made of WIMPs. See for example http://arxiv.org/abs/1209.0563 and remember this: space is dark, and there's a lot of it about.

From the way MOND couldn't describe so many things about our universe, it seems it could never have been correct in the first place. However, the definition of Dark Matter is that we don't know alot about it.and so there is still the smallest possibility that a version, albiet heavily moddified, of MOND could still be the answer but i do agree that this latest piece of evidence does seem to put another nail in the coffin for MOND.

It would be helpful if you included a citation to a refereed paper with this claim. The closest I've found by any of the authors you refer to is Freire et al., Monthly Notices of the Royal Astronomical Society 423 (2012) 3328–3343. But that paper concludes, "Therefore, the results of the present paper do not rule out TeVeS, but show that its original 2004 formulation by Bekenstein may need to be amended. At present, even its original writing is consistent, although it does need some tuning." Is there something more recent? Where? (I'm not defending TeVeS here, but if there's really a new result I'd like to know the details.)

John and Bobh actually have a decent point here, but the info may be in the article just not clearly labeled.

The last graph in the article (the one showing pulsar orbit period vs. year) seems to be comparing three cases: a prediction of the Relativity + DM model (red line), the data itself (black circles), and a straight green dashed line which obviously doesn't fit the data. Ethan, does that green line represent what MOND would predict?

Oops, that should read, "does that green line represent what TeVeS would predict?"

"98% of the mass of the Universe isn’t stars, or our understanding of gravitation is wrong." Realy ? You measure speed, wich is distance/time. Both are relativistic. Distance (in context to galaxys) is a huge number. Time is a relatiive small number. So any relativistic effect will make a huge difference in speed calculations.

And besides that, we move. You cant even drive a bike an tell me the speed of a passing car precisly. But you can measure the speed of huge moving objects accurate while you move your self. Dat is impossible.

So, what is black matter ? Its a math correction that repesents the relativistic effects of our space/time continuum.

And besides that, we move. You cant even drive a bike an tell me the speed of a passing car precisly.

Interesting article, and that large study's results are very revealing. MOND supports don't have much of a leg to stand on, and TeVeS seems to be ruled out entirely now. Out of curiosity, do those more recent studies of dark matter manage to better explain rotational speeds at the scale of galaxies? I'm still curious about that.

If I might make a recommendation, you buried the lead. You should have mentioned that large study at the very start of the article, then you could tell the story that leads up to that study and explain it in more detail. As it was, I spent a long time waiting to find out exactly what this new strike against MOND was. You might say it's "like a mystery novel", but in a murder mystery they always tell you at the start that someone's been murdered.

It's important to let your readers know what all this is leading up to in the first paragraph.

Neutrons emitted from the black hole convert to the Particle exions. This Particle has mass. Its attraction to gravity, decreases its mass . With a increasing force field to oppose gravity. To a reducing mass point zero, neutralises gravity, now acting as a repellent force. Hence named chameleon fields.

Ethan, do you know any more details on the specific problems of modelling galactic rotation in the current understanding (with dark matter and general relativity), and in which way the models fail, and on any disciplinary consensus of what has to be figured out before we can model galactic-scale motion accurately? I would love to hear more from you on this in a future article. It seems like a huge problem that we have no clue what keeps a galaxy in a nice spiral shape, even taking into account dark matter... is it felt that we need a better idea of how the dark matter is distributed in and around the galaxy, for example?

Dark Matter is perhaps not one article, but two? Neutrons and neutron-like(neutrinos?) that are fundamentally alike and fundamentally different within given ranges of measure.

Their differences create initial attractive force. Paired they become so similar they repel one another in a given range, to the point of becoming attractive force once more.

"As above, so below."
So Newton's observations could still work in some range of this, like positive/negative charges the dark matter constantly gives/takes at one end of spectrum it is massive, the two particles slow like neutrons paired and become larger, doubling mass in a given area, producing greater gravity. This doubling and likeness produces repulsion which then counters mass with speed and motion across an expanse.

Closer, slower, dense particles then shed some of their value in the drag of gravitation as they attract and shed subparticles are repulsed for their similarity to the original particle on the outer curve of interaction.

The constant give and take produces attraction and repulsion enough to suspend relation with similar pairs, and still works to accelerate/propulse subparticles as they are shed through slowing while increasing the resulting mass.

Perhaps along linear lines the way water beads string along molecules. Thus a linear expansion occurs while at the same time a retraction. It retracts in becoming dense while that makes it shed and expand.

Fine distinct differences and similarities shared with a band of action between particles being similar enough for stasis near mass until reaching horizon or repulsion and still different enough to attract.