“When he came home, I could see a change. He was quieter and he was a man and a hero to me. I watched him and listened to him. I’d never had an opportunity to do a superhero, and when that came, [that voice] just came right out of me and I sounded like Optimus.” -Peter Cullen, on his brother

If you were a kid in the mid-to-late 1980s, you couldn't have missed the phenomenon of Transformers, and if you were a kid again in the late 2000s/early 2010s, you had another chance to become enamored of these multi-formed giant robots. Have a listen to Tracy Chapman’s reflective and provocative song,

while you consider that Transformers isn't just a recipe for toy sales,

but is a recipe for firing the imaginations of kids and adults alike. In particular, if you wanted to have a birthday party that was Transformers-themed, what could be a better addition to it than an Optimus Prime cake?

The answer, of course, is an Optimus Prime Cake that transforms! 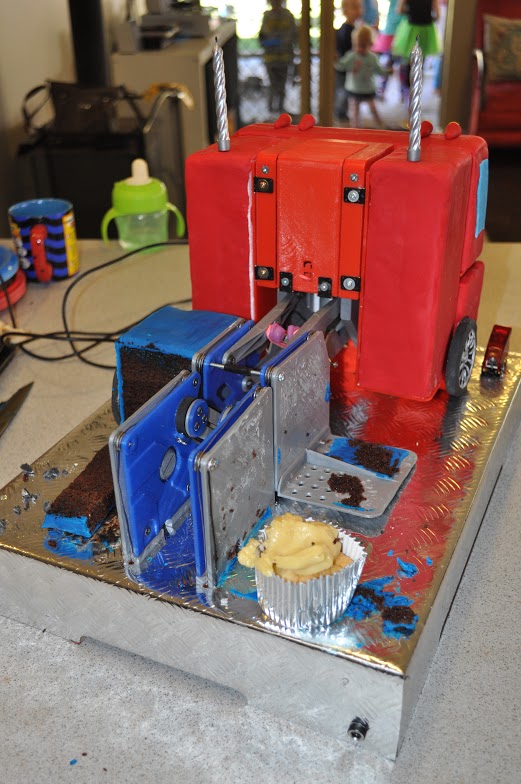 Go check out the whole thing, including how it was made, along with videos, for our weekend diversion!

Nice to have a second childhood; although I think most of us are still young-at-heart. Well done.
Thanks for the show.

Transformers hasn't survived 30 years of moving on, however. At least not the first series. Which consisted of "Autobots get asses kicked by Deceptecons without Optimus Prime. Optimus Prime turns up, does a John Wayne and kicks the ass of every Decepticon. End".

Thundercats, on the other hand, HAVE. As has Ulesseyes 31.

As long as you don't binge watch more than two or three at a time.

Not sure I'm with you on your love of Thundercats but the movie trailer was fun.

You don't have to like the Thundercats to agree that they've held up over time. The writing is pretty good, the art fine, and the interest is held.

And not "held up over time" like Dogtanion and the Four Muskahounds, where there's no number lower than zero.

The stories weren't great and the animation was terrible, but the thing that really made Transformers was the voice acting. Peter Cullen as Optimus Prime was great, but for me the cherry on top of Transformers (and GI Joe) was Christopher Collins (aka Chris Latta) as Starscream and Cobra Commander. No voice actor more humorously portrays the frustration of being surrounded by nincompoops than Christopher Collins. R.I.P.

Well, it was more the stories weren't what I remembered: I remembered the Autobots being of some damn use, whereas looking at it today with an adult eye I see a bunch of useless losers who, despite being supposed to fight deceptecons, couldn't fight their way out of a paper bag.

I probably saw "Cool robot to car transforming!" and never really bothered with the Transformers story.

And that, I believe, is why so many kids classics didn't stand the test of time. If it had a tag that worked only if you didn't notice the problems, then you thought it was good. Once upon a time.

It was worse than The A Team, where EVERY SINGLE DAMN STORY near enough was the same. It's still OK, but only most of the first series where they managed all the limited area of joke and storyline they could fit in were done. After that, it was only spot ones, every now and then.

The Tick, mind, will be a classic. The cartoons, mind, not the live action...