“A cosmic mystery of immense proportions, once seemingly on the verge of solution, has deepened and left astronomers and astrophysicists more baffled than ever. The crux … is that the vast majority of the mass of the universe seems to be missing.” –William J. Broad

When Fritz Zwicky first calculated what the mass of a galaxy cluster needed to be to keep its galaxies moving at the observed speeds and compared it with the masses due to the starlight he saw, there was a huge discrepancy. The amount of gravity in the Universe, when compared to the amount of visible matter, didn't match. 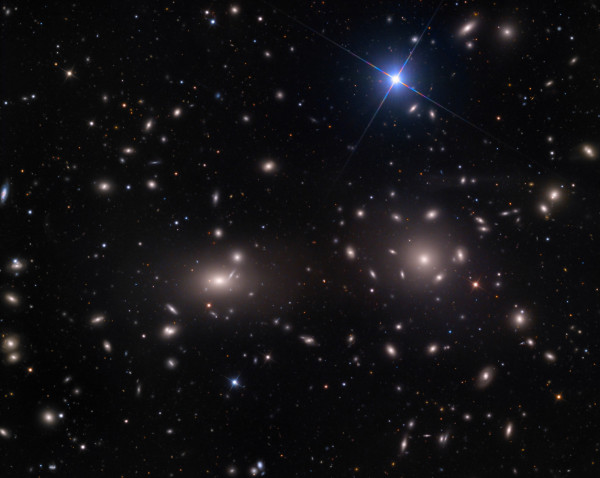 Adding up all the known sources of normal matter didn't quite get us there, either: only one-sixth of the matter can be made of protons, neutrons and electrons. The other 83% or so must be some form of dark matter, which is yet undiscovered. Well, except for around 1% of it, which we actually know must be in the form of neutrinos.

Come find out about it -- including how much there is and how we know -- on today's Throwback Thursday.

The mass which fills 'empty' space is beginning to be referred to as the 'dark mass' in order to distinguish it from the baggage associated with dark matter.

"That is, all that we are certain about [is] the dark mass, not dark matter, let alone to say about the dark 'particle'."

Particles of matter move through and displace the dark mass, including 'particles' as large as galaxies and galaxy clusters.

"the emerging picture of the dark matter halo of the Milky Way is dominantly lopsided in nature."

The Milky Way's halo is the state of displacement of the dark mass.

The Milky Way moves through and curves spacetime.

The state of displacement of the dark mass is curved spacetime.

The state of displacement of the dark mass *is* gravity.

Majorana fermion as original particle w/ L-handed neutrinos as "visible" dark matter & R-handed as the rest . . . we can dream can't we?

Feel free, Virge. Why wake up?

@Virginia Smith #3: That's definitely a possibility, but there's data against it. First, light (Standard Model-esque) neutrinos cannot be all the dark matter, because they would have been relativistic (hot), and wouldn't form structures in the way we observe. Second, we've got good data on the neutrino density, and since they have to be produced pairwise in the early universe, doubling that doesn't get you to the 25% DM fraction.

It is certainly possible that a very heavy (few GeV) sterile neutrino is a decent dark matter candidate (essentially, it's a WIMP :-), but the really cool recent work with the CMB narrowing the effective Nv to just 3.046 pretty much rules it out.

That *DOES NOT* mean we shouldn't keep searching for it, but it makes the prospects dimmer.