"I happen to have discovered a direct relation between magnetism and light, also electricity and light, and the field it opens is so large and I think rich." -Michael Faraday

With the launch of the Fermi satellite in the late 2000s, we began observing the highest energy photons in the Universe -- gamma rays -- all over the sky, to unprecedented precision. Produced from cosmic ray showers in space when high energy protons run into other, stationary protons, these gamma rays locate point sources from supermassive black holes to supernova remnants to pulsars. 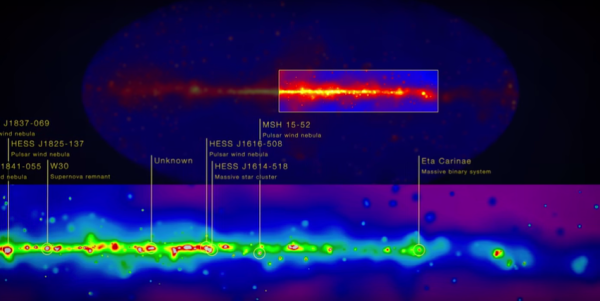 There is, additionally, a great correlation between the infrared sky and the gamma ray sky, since the great high-energy background scatters off of the diffuse infrared gas, producing gamma rays there as well. But while a great many sources can be correlated with known structures, Fermi reveals at least one unknown, intense behemoth that emits spectacularly in gamma rays. 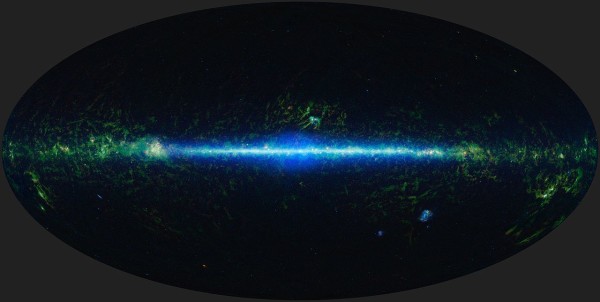 Go find out what my guess is as to its nature!

Down the barrel of a thousand cosmic cannons!

"If we knew what it was we were doing, it would not be called research, would it?" -Albert Einstein Our galaxy is but one among hundreds of billions in the cosmos, nearly all of which contain supermassive black holes at the center. Ours happens to be "only" a few million times as massive as our Sun…

The Night the Universe Changed

"I conclude, therefore, that this star is not some kind of comet or a fiery meteor... but that it is a star shining in the firmament itself one that has never previously been seen before our time, in any age since the beginning of the world." -Tycho Brahe I want to take you back in history, back to…

"On what can we now place our hopes of solving the many riddles which still exist as to the origin and composition of cosmic rays?" -Victor Francis Hess We've come a tremendously long way in our understanding of the Universe, but there are plenty of mysteries still to be revealed. Way back in the…

"Upon one occasion, while engaged upon a seven-foot mirror, he did not remove his hands from it for 16 hours together." -from Caroline Herschel's obituary Welcome to another Messier Monday here on Starts With A Bang! Each Monday, we highlight a different one of the 110 deep-sky objects that Messier…

Go find out what Forbes is to its nature

Hey Ethan, first off I would just like to say thank you for the work you do taking fascinating and mind boggling topics and making them accessible to a layman like myself. I love reading your blog/s and check for new content almost daily. Earlier today I read this article...

...now when I try to access the teased portions of your articles which are hosted at forbes, I'm not allowed to access the site without turning my adblocker off. I understand that websites make their money and pay their bills with advertising, and for sites that I trust I have no problem turning adblocker off and looking at their banner ads or what have you, however I do not want to expose my devices to known malware just to read an article (no matter how engrossing it may be).

Is there another site that hosts your full content or is it forbes exclusive now?

Are you freaking kidding me...Some click bait BS linking to FORBES of all places.

Click here to find out next which malware forbes will give you!

I wanted to read it but Forbes refuses to serve the page, demanding that I turn off the adblocker that I don't have.

Maybe it's because I'm not running Windows here, so they can't use the usual security backdoors on my system? No clue. But it would be nice to read the article.

It's a problem for Windows users as well. Fortune has hust added this roadblock.

Please stop the whining and learn to configure your ABP properly. Here are the filters that currently work for me:- https://imgur.com/ykReRaV

Patrick, reducing the effectiveness of my Adblocker will never occur. Check out what really is going on with top sites and malware advertising ... then you might want to re-think allowing those filters.
http://www.computerworld.com/article/3044565/security/advertising-based…