No, mysterious signals from space are not dark matter (Synopsis)

"Two recent studies by teams in the U.S. and the Netherlands have shown that the gamma-ray excess at the galactic center is speckled, not smooth as we would expect for a dark matter signal. Those results suggest the speckles may be due to point sources that we can’t see as individual sources..." -Eric Charles

When NASA’s Fermi satellite began operations, it didn’t take long before we had constructed the most accurate, comprehensive gamma ray map of the galaxy. While many outstanding astrophysics findings ensued, including the discovery of many new pulsars, there was one particular mystery that came about as well: an unexplained excess of gamma rays from the galactic center. Many possible explanations emerged, but one gathered a disproportionately large and exciting amount of attention: that of dark matter annihilations. 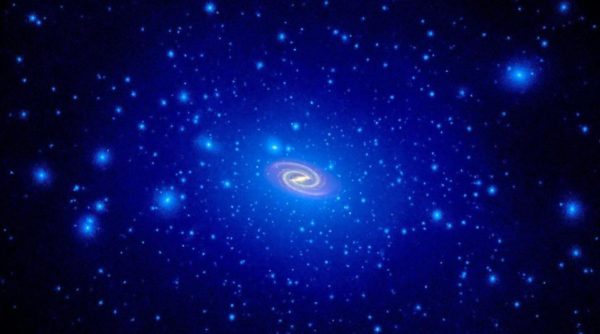 According to models and simulations, all galaxies should be embedded in dark matter halos, whose densities peak at the galactic centers. However, unless the dark matter obeys very particular models and exhibits specific properties, it will be difficult to account for a gamma ray excess with dark matter. Image credit: NASA, ESA, and T. Brown and J. Tumlinson (STScI).

In some models of dark matter, it’s a particle that’s its own antiparticle. If dark matter/dark matter annihilation occurs, it could produce excessive gamma rays, as well as cascades of new particle/antiparticle pairs that would result in a photon signal peaked at 511 keV, as positrons annihilated with electrons. After a huge effort to uncover the nature of this gamma ray excess, Fermi finally has an answer.

An excess of gamma-rays coming from the center of the Milky Way is likely due to a population of pulsars – rapidly spinning, very dense and highly magnetized neutron stars that emit 'beams' of gamma rays like cosmic lighthouses. Image credit: NASA/CXC/University of Massachusetts/D. Wang et al.; Greg Stewart/SLAC National Accelerator Laboratory.

Did you bet on dark matter? You shouldn’t have! Come find out how pulsars are likely responsible, and why dark matter is disfavored for the gamma ray excess seen in the Milky Way.

The interior of a pulsar in 90% made up of neutrons, with charged particles like protons and electrons existing in the outer layers. They spin incredibly rapidly — the fastest known pulsar rotates 766 times per second — creating intense magnetic fields that are billions of times as strong as anything ever made on Earth.

Tangentially related question, but what is the difference between a Pulsar and a Magnetar?

Pulsars and magnetars are both neutron stars with magnetic fields. Pulsar fields are typically a few megateslas (MT), and produce (due to their rotation) repeating signals in radio and microwaves, from the cyclotron motion of electrons around the field lines. Millisecond pulsars have even weaker magnetic fields, just tens of kT (the mechanism thought to spin them up to such high rotation rates would also reduce their initial pulsar-like magnetic field).

Magnetars have much, much stronger magnetic fields, of the order of GT. They produce periodic x-ray and gamma ray signals, likely from sychrotron radiation.

I know that Google is my friend, and so is YouTube. I still don't understand what causes one neutron star to become a magnetar and another one not to. If it were just rotation speed that would be a good explanation but not all pulsars are millisecond pulsars. That means some slow rotating neutron stars are just neutron stars. Is it due to the size of the original star? The metalicity? What? Just stating that a magnetar has a field about 1000 times stronger than a typical neutron star doesn't help me understand the difference.

I've always found magnetars to be interesting objects. The idea that if you get to within a thousand kilometers of one your atoms stop working correctly is mind bending stuff. It is disappointing the descriptions I find seems to just sum up to a neutron star with a mangetic field 1000 stronger than normal without any explanation as to why.

like Michael said, google is your friend. From wiki:

"When in a supernova, a star collapses to a neutron star, its magnetic field increases dramatically in strength. Halving a linear dimension increases the magnetic field fourfold. Duncan and Thompson calculated that when the spin, temperature and magnetic field of a newly formed neutron star falls into the right ranges, a dynamo mechanism could act, converting heat and rotational energy into magnetic energy and increasing the magnetic field, normally an already enormous 108 teslas, to more than 1011 teslas (or 1015 gauss). The result is a magnetar.[12] It is estimated that about one in ten supernova explosions results in a magnetar rather than a more standard neutron star or pulsar.[13]"

I don't think that dark matter is something "novel" comparing to pulsars. Dark matter was discovered by Fritz Zwicky in 1933 while neutron stars were speculated about year later and actually discovered in 1965. So trying to explain the gamma rays from galactic centre by dark matter is more conservative approach then using a novel pulsars.