Physicists Must Accept That Some Things Are Unknowable (Synopsis)

As we peel back the layers of information deeper and deeper into the Universe's history, we uncover progressively more knowledge about how everything we know today came to be. The discovery of distant galaxies and their redshifts led to expanding Universe, which led to the Big Bang and the discovery of very early phases like the cosmic microwave background and big bang nucleosynthesis.

After the Universe’s atoms become neutral, not only did the photons cease scattering, all they do is redshift subject to the expanding spacetime they exist in, diluting as the Universe expands while losing energy as their wavelength continues to redshift. Image credit: E. Siegel, from his book, Beyond the Galaxy.

But before that, there was a period of cosmic inflation that left its mark on the Universe. What came before inflation, then? Did it always exist? Did it have a beginning? Or did it mark the rebirth of a cosmic cycle? Maddeningly, this information may forever be inaccessible to us, as the nature of inflation wipes all this information clean from our visible Universe. 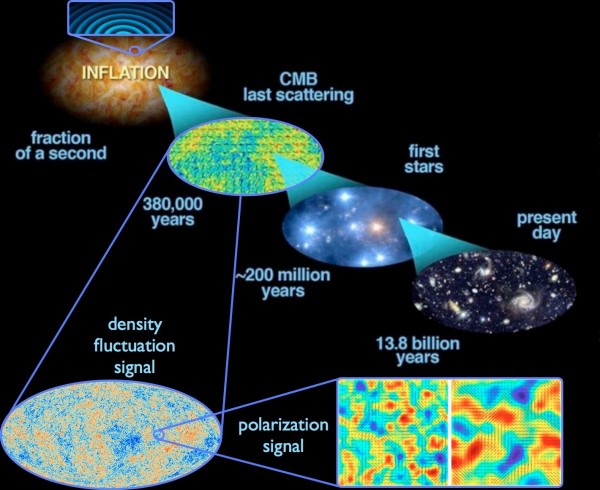 Image credit: E. Siegel, with images derived from ESA/Planck and the DoE/NASA/ NSF interagency task force on CMB research. From his book, Beyond The Galaxy.

Go find out why some things are inherently unknowable on this special Sunday edition of Starts With A Bang!

On February 12 , 2002 Donald Rumsfield stated the following about WMD in Iraq:

"Reports that say that something hasn't happened are always interesting to me, because as we know, there are known knowns; there are things we know we know. We also know there are known unknowns; that is to say we know there are some things we do not know. But there are also unknown unknowns – the ones we don't know we don't know. And if one looks throughout the history of our country and other free countries, it is the latter category that tend to be the difficult ones"

If you replace "...our country and the other free countries." with the word 'Science' it makes sense in the context of Science.

“The solution to these problems was the theory of cosmic inflation, which replaced the idea of a singularity with a period of exponentially expanding space…”

To my mind, you can’t go somewhere unless there’s a somewhere to go to. “Inflation” and “expansion” are just other words for “going”. What is the cosmos inflating/expanding INTO?
It seems to me there’s no somewhere to go TO.

Well, common sense is not always a good guide to modern physics. Or Newton's physics either!

"<b?To my mind, you can’t go somewhere unless there’s a somewhere to go to."

And that's why you fail.

Funny, though, how nobody is right when they say to their mind, the idea of a superpowerful creator of everything isn't possible. Yet your "mind" is sufficient to the task of determining what is and is not possible in the universe...

“Inflation” and “expansion” are just other words for “going”.

I invite the reader to try substituting "going" into idiomatic English sentences in lieu of other inflections of "inflate" and "expand."

"I need to go my bike tire."
"I went my lungs during spirometry."
Etc.

p.s.
building a mental picture of space expanding "inward" instead of outward is difficult and counter intuitive.. I agree. There aren't things that to that here on earth.. so you have no experience of it. Raising bread, or pumping the tire and things like that are just trying to help to a certain degree to try to help imagine something like that.. but you still have space in everyday life which those things expand to.

One way I found that, at least to me, is more closer to what math tells.. is to imagine a picture in i.e. photoshop. you have picture dimensions(how big it is rendered on the screen) and resolution (how many pixels..units.. there are).

The dimension of the picture is still 10x10 cm.. but resolution is bigger. There are more pixels in the image. You can think of the dimension of the picture as the horizon, and the pixels are spacetime.. those two squares we drew are matter and energy in spacetime. The squares didn't "move" when you raised the resolution... but there were more "units" of space between them.. and it will take information or light or whatever.. traveling at a constant speed of 300.000 pixels per second.. that much more time to get from one square to another.
Now set raising of the resolution to some constant value in time.. let's say +5 pixels per cm per second... and in some time in the future.. a signal traveling at 300.000 pixels per second will never be able to get to the second square.. not only that.. but it will never be able to get to the edge of the image.. more and more white pixels will be between it and the end of image.

So that's my best effort to try to visualize inflation, cosmological constant and spacetime expanding onto instelf. Hope it helps :) And you can play around with it in any image editing software.

Harry Cliff Touched On This In A Ted Talk:
http://www.ted.com/talks/harry_cliff_have_we_reached_the_end_of_physics…

Ethan, would you consider doing a TED Talk?

Trump will help make America great again, by ensuring that the Democrats will win by a landslide. And if Bernie can win the position against Hillary of the Democratic nominee, he'll win by such a MASSIVE margin it would prove to the establishment once and for all that while political mantras have moved excessively to the right, the people really are not moving anywhere, and that the "left" pandering to the right to win those votes, hoping that the absolute lack of any ACTUAL left to vote for, therefore the rightwing Democratic party would be the lesser of two evils and voted for, is a losing strategy, since you open up a groundswell of hate against the politicial classes.

Because even right wing normal people (the asshat above excepted) like SOME social (leftist) principles, but the politicians demand only rightwing and even more rightwing.

So, Trump winning would definitely help make America great again. Even if Hilary wins. Because maybe the nutjobs in the Republican party will lose their voice that outweighs their actual numbers and the sane but browbeaten majority can stop the death spiral.

Trump supporter, you are an idiot.

Oh, and before you go claiming that those two gay men are kissing each other, not kissing See Nowt or the trumpeter

a) If you were kissing your wife, this would be the same thing too: unless your wife is See Nowt...
b) Donglegate. Jokes overheard, eavesdropper offended, one person fired. Not a joke to that eavesdropper.

With sufficient knowledge, everything can be explained, even God....

"With sufficient knowledge, everything can be explained, even God"
Nope:
Romans 11:34:
“Who has known the mind of the Lord?
Or who has been his counselor?”

Now The Wowzer, I gota feel sorry for this person because who on Earth has such a disenfranchised mind from reality. I gota tell ya.

At least with LotR, written by an educated man rather than sheep herders squatting in their dungheaps 10,000 years ago, telling off colour just-so-stories over the campfire, LotR is actually a *coherent* fantasy novel, with at least believable characters in it, unlike your fantasy novel.

Lastly, teaebaggwr, please stop with the disposable account and move your tired old bullshit mythology either to your assigned place of mental institution for that problem (your "church") or take it to the dump thread,

Hey be nice. Ethan ask for a kind start to the new year.
Why are you Brits so down on "The Donald"?
Don't you folks have more ummm pressing issues to debate about in parliament than banning Trump?

Heck you even banned another Great American Michael Savage. What was up with that crazy thinking?

Trump here is just as mad and stupid as the infantile original.

Now piss off to the dumpthread. You know where it is teabaggie: