How Would Our Universe Be Different Without Dark Energy? (Synopsis)

"We've known for a long time that the universe is expanding. But about 15 years ago, my colleagues and I discovered that it is expanding faster and faster. That is, the universe is accelerating, and that was not expected, but it is now attributed to this mysterious stuff called dark energy which seems to make up about 70 percent of the universe." -Adam Riess

The Universe has been said to be not only stranger than we imagine, but stranger than we can imagine. After the discovery of the expanding Universe, scientists considered that there was a great cosmic race from the moment of the Big Bang between the initial expansion and the force of gravity, which works to pull everything back together. 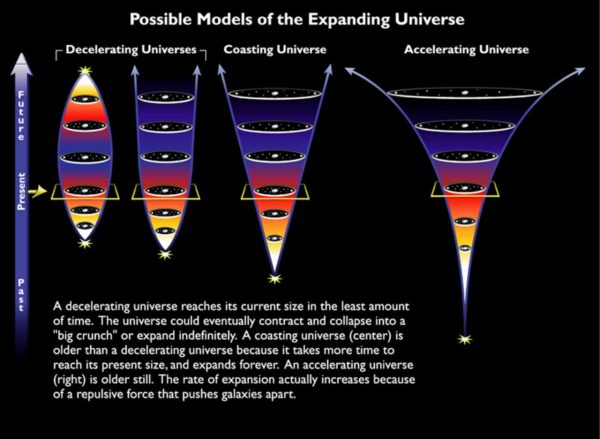 Without dark energy, we’d be somewhere in between a decelerating and a coasting Universe. Image credit: NASA & ESA, of possible models of the expanding Universe.

It was quite a surprise when dark energy was discovered, giving us a Universe that doesn't slow down in its expansion over time, but rather accelerates. Yet we often overlook exactly how dark energy was such a surprise. A look back at the top differences between Universes with and without dark energy, including for the fate of the local group, our local supercluster, and the far reaches of our Universe and what we can eventually see, really highlights the magnitude of just how significantly dark energy changes everything. 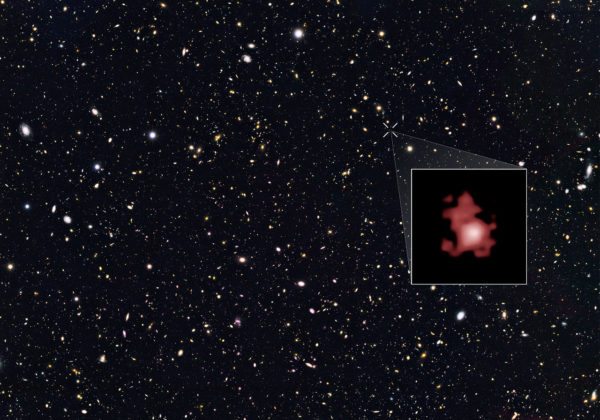 Go get the whole story over on Forbes today!

@Ethan, if our Universe did not have dark energy, the expansion history would be different, as you've noted.

But doesn't that mean that it's _age_ would be different as well? In particular, wouldn't it have a younger estimated age because the expansion needed to get to its current size and rate, was more rapid?

It seems like in your text you assumed the same age, but talked about other different parameters.

Not necessarily. Remember, the vast majority of our universe will have expanded out beyond our visible universe. Therefore we'd just see more galaxies and they'd be closer together.

@Wow: That's what I'm not sure about. I'm not worried about the size (which is far larger than the cosmic horizon), it's the relationship between distance and age (i.e., time since the hot big bang).

But we only see the distance because of the "things" sitting on it.

If it were younger because there's less stuff going on than currently consiered the case, then we'd be seeing less than 13.7 Bn years.

Maybe what you're not getting from me is that without dark energy we may see greater anisotropy in the CMB, since it includes more of the "averagely non-special usual variation" entire universe that includes that which is outside our purview in this current universe.

It would still be rather excessively flat and we'd still use inflation to explain it.

There'd just be more matter in it than we currently see because it hasn't had time to bugger off over the horizon in a mere 13 billion years or so.

Does that statement present any problems with the law of the conservation of energy?

@Deceiver #5: No, it doesn't. Energy is a frame-dependent quantity, and it is not well-defined globally in a curved metric.

I'm confident that you have no idea what most of those words mean, or what they mean when strung together like that. Of course, not understanding isn't really relevant to whether you have anything to day.

Put another way, it's been known for nearly a century that energy is not conserved in GR. Go figure out where conservation laws come from; you've already got three of the letters in the right order, starting with 'N'.