When the first gravitational wave signal ever, GW150914, was directly detected, NASA’s Fermi GBM team shocked the world by announcing the detection of a high-energy burst of electromagnetic radiation. This was a huge surprise, because merging black holes shouldn’t have a bright gamma ray or X-ray flash associated with them!

Image credit: NASA, of an inspiral and merger of two massive, compact objects; illustration only.

A statistical reanalysis and the ESA’s INTEGRAL satellite both failed to confirm it, but it would take a second event to know for certain. With GW151226 now in the books, a look through the Fermi GBM data shows what we suspected all along: black holes DON’T burst when they merge! 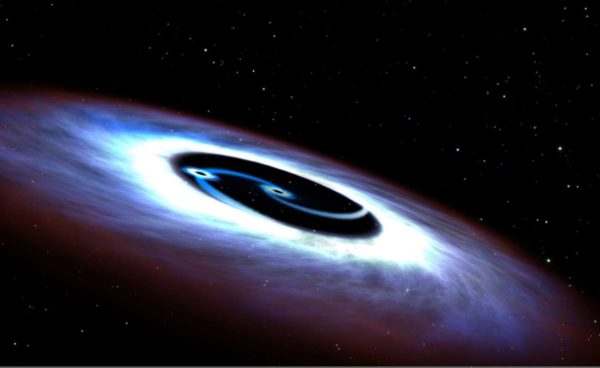 Go see the full story over on Forbes today.

99.8% Wrong: How NASA's Fermi Scientists Are Fooling Themselves About Gamma Rays From Black Holes (Synopsis)

"That’s the next step: to simultaneously see [gravitational waves] with three, four or five interferometers, localize it quickly, within minutes, and have other observatories catch it instantly, and catch it in the optical or the X-ray bands. That’s going to provide a whole new understanding in…

"What's really exciting is what comes next. I think we're opening a window on the universe -- a window of gravitational wave astronomy." -Dave Reitze On September 14, 2015, LIGO directly detected gravitational waves for the first time, from the inspiral-and-merger of two quite massive black holes.…

"It turned out that nature was very kind, and there appear to be many of these black holes in the Universe and we were lucky enough to see one." -Dave Reitze, executive director of LIGO On September 14th, 2015, just days after turning on, the twin Advanced LIGO detectors detected the first…

LIGO's Black Holes Probably Did Not Come From One Star (Synopsis)

"Even if the Fermi detection is a false alarm, future LIGO events should be monitored for accompanying light irrespective of whether they originate from black hole mergers. Nature can always surprise us." -Avi Loeb Ever since LIGO first announced the direct detection of gravitational waves from two…

Just a thought that came into my head...

Ethan has quite an interest in black holes.
Four of his last nine articles are about them.
If it’s not a fondness, it’s certainly a fascination and acceptance.

Which is somewhat ironic.
Black holes are really quite “mean” and “unforgiving”. *Anything* that was to go into a black hole NEVER gets out. Even if it’s an “innocent” beam of light.
*Even if* it’s an *innocent* you.
You NEVER will get out.

It’s quite a concept.
I say ironic because I’m pretty confident Ethan would have no similar interest in, nor acceptance of, the concept of Hell.

I say ironic because I’m pretty confident Ethan would have no similar interest in, nor acceptance of, the concept of Hell.

@Deceiver #1: "Ironic"? It's his _job_, you bloody imbecile. Ethan is a professional astrophysicist.

You, on the other hand, must have an inordinate fondness (or at least a fascination and acceptance), for the underside of bridges.

Ethan, I suspect merging BH with accretion disks have been modeled. Just how much mass would need to be in the disk(s) to make a signal detectable at 1.e9 lightyears?

I say ironic because I’m pretty confident Ethan would have no similar interest in, nor acceptance of, the concept of Hell.

Not ironic at all (even as you don't seem to know the meaning of ironic). Ethan is, after all, a scientist, and so has a reason to be interested in the sorts of things science, especially his area of science, studies.

On the contrary, the hell to which you refer is the stuff of mythology, dragged out to scare children and the weak-minded in order to keep them in line.

It's possible that Ethan would write about Hell if theologians ever got around to defining what Hell is, building a Hell detector, and successfully recording the screams of the damned.