“It may be that ultimately the search for dark matter will turn out to be the most expensive and largest null result experiment since the Michelson-Morley experiment, which failed to detect the ether.” -John Moffat

Dark matter is a puzzle that’s now more than 80 years old: the presence of all the known, observable, detectable normal matter — the stuff in the standard model — cannot account for the gravitation of the astronomical objects we observe. But despite our inability to create or detect it in a laboratory, we’re certain of its existence in the Universe. 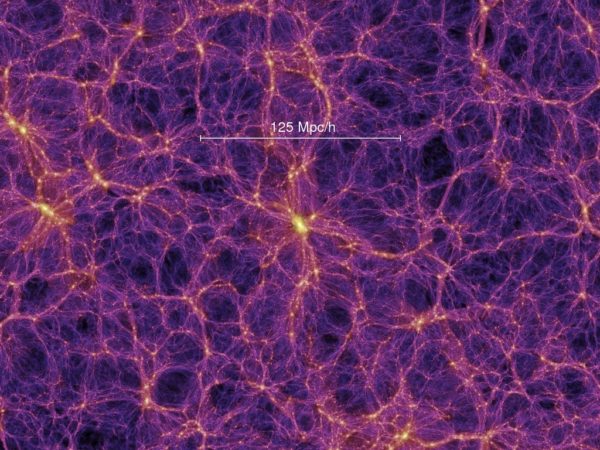 The true test of this comes from colliding galaxy clusters, which show a distinct separation between all the known “normal” components, which collide, heat up and emit light, and the gravitational components, which very clearly don’t. At this point, over a dozen distinct colliding clusters show this effect, from some of the smallest known galactic groups to the largest colliding cluster in the Universe: El Gordo. The full suite of evidence is overwhelming, but this one empirical proof should be all the evidence a reasonable person needs to convince themselves!

The first layer of existence only needs infinity.

The idea of dark matter was introduced to explain the rotation problem of stars in galaxies. A now less popular alternative explanation for this phenomenon is MOND. According to wikipedia, the mass of the dark matter in the Bullet Cluster can not explain away the galaxy rotation problem. The mass is a factor 10 too small, while the MOND backers claim that the dynamics of mass external to the cluster can be explained by MOND and the missing mass to explain the rotation problem is off by a factor of only two. Do MOND backers have a strong case or are they just conservatively clinging on to their old theories?

@anneb #2: The idea of dark matter was introduced to explain the excessive virial speeds of galaxies in clusters (Zwicky, 1933) [Oort and Kapteyn had previously invoked "missing mass" for local stellar speeds, but their measurements turned out to be incorrect.] It wasn't until the late 1960's that Rubin and Ford produced sufficiently detailed galactic rotation curves to reveal the need for dark matter there as well.

Dark matter is also clearly revealed by both strong and weak lensing effects (1980's to present). While the velocity discrepancies can be partially "explained" by MOND, the latter cannot reproduce the observed gravitational lensing effects. Even the cluster speeds can't be fully explained by MOND, which still needs to add unseen mass.

@anneb, given your claims about the event were incorrect, what will you do in the future if you have a claim to make? Will you CHECK YOUR FACTS next time???

"...there is no real infinity"

Well, someone had a Woody...

"Well, someone had a Woody…"