Dark matter rises to its biggest challenge... and succeeds! (Synopsis)

"Faced with the choice between changing one's mind and proving that there is no need to do so, almost everybody gets busy on the proof." -J. K. Galbraith

Last month, tensions between dark matter simulations and galactic rotation observations reached a new high. Despite all the successes of dark matter on the largest scales -- for the CMB, for large-scale structure, for gravitational lensing and for galaxy clusters, among others -- the simplest dark matter simulations reproduced unrealistic results for how individual galaxies ought to rotate. Moreover, a team of scientists uncovered a surprising relationship: between the normal (baryonic) matter alone and the observed acceleration in galaxies. 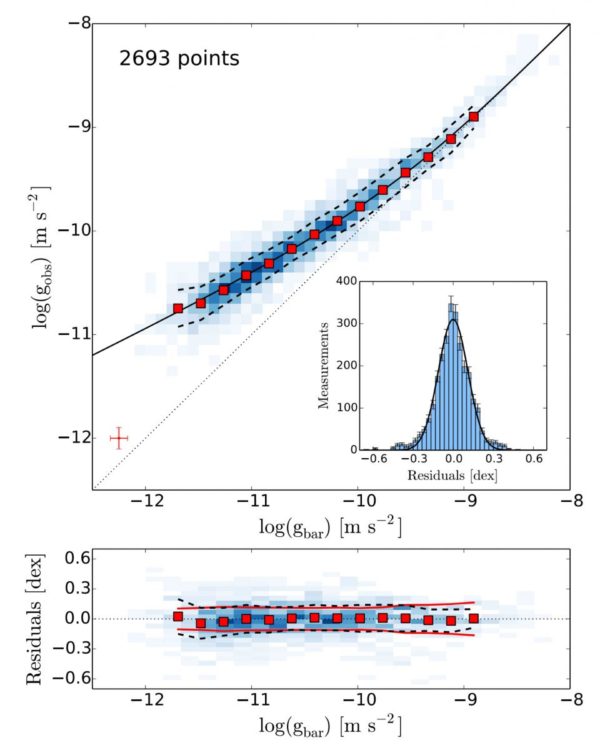 The correlation between gravitational acceleration (y-axis) and the normal, baryonic matter (x-axis) visible in an assembly of 153 galaxies. The blue points show each individual galaxy, while the red show binned data. Image credit: The Radial Acceleration Relation in Rotationally Supported Galaxies, Stacy McGaugh, Federico Lelli and Jim Schombert, 2016. From https://arxiv.org/pdf/1609.05917v1.pdf.

If dark matter were real, then the simulations needed to reproduce that result as well, which appeared to be a tremendous challenge. Yet in a new paper, two scientists from McMaster University, Ben Keller and James Wadsley, did exactly this. Even more impressively, they didn’t make new simulations, they simply took pre-existing ones and showed that this relation does, in fact, get reproduced among all their galaxies. 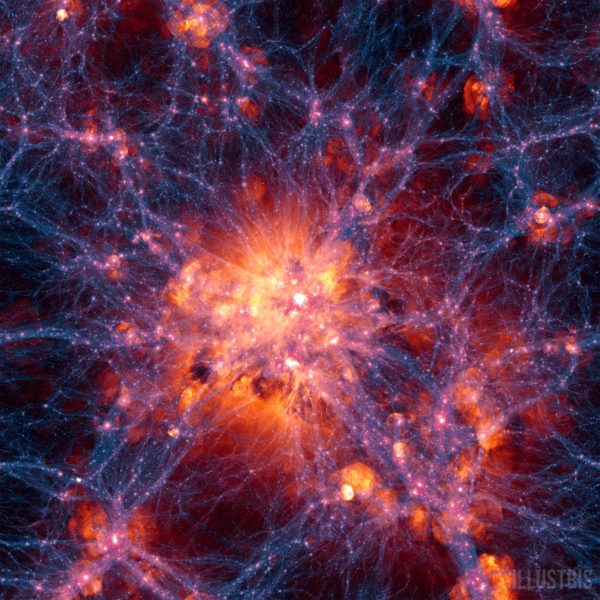 While the web of dark matter (purple) might seem to determine cosmic structure formation on its own, the feedback from normal matter (red) can severely impact galactic scales. Image credit: Illustris Collaboration / Illustris Simulation.

If the modified gravity camp through down the gauntlet, the dark matter camp just revealed they had brought a bazooka to a gunfight. Go get the full story!

Should be threw down the gauntlet.

Is this the paper?

@A.C. #2: Yes. The URL is cited in the caption to Keller and Wadsley's figure in Ethan's Forbes article.

Readers of this blog should be aware of the new paper titled "The Mass-Discrepancy Acceleration Relation: a Natural Outcome of Galaxy Formation in CDM halos" at

@Louis Wilbur #4: Interesting confirmation. A second, different MHD cosmological simulation shows the same effect as the MUGS2 simulation used by Keller and Wadsley, reinforcing the conclusion that galactic rotation curves in the presence of dark matter are a result of known baryonic-matter behaviour.

As I recall, the McGaugh team's observations had many galaxies of various sizes, including ones that were supposedly dominated by dark matter and had very little baryonic matter. Are there galaxies like that in the McMaster simulation or other ones, and do they also obey the SPARC acceleration law in simulation?

Also, at what redshifts are major deviations expected to be seen from the SPARC acceleration law based on the McMaster simulations? I take it all of the galaxies that McGaugh's team observed are well within the expected redshifts where the McMaster simulations say that the SPARC law should hold well, and we can't yet make good measurements of really distant galaxies where the SPARC law would no longer be a good fit.

1)Dark Matter is everywhere. Anytime you affect electricity, light or magnetism, you are manipulating Dark Matter.
2)Light is a wave frequency propagating in a medium of Dark Matter.
3)Dark Matter is nothing more than the unorganized constituent components of atoms.
4)Black Holes are made of nothing but Dark Matter.
5)There is a spinning Black Hole at the center of every galaxy.
6)Galaxies are the product of exploding Black Holes – A Big Bang.
7)Dark matter can travel no faster than the speed of light, squared.
8)The arms of Galaxies (a product of an exploding Black Hole) are created in a tiny fraction of a second; which explains why all matter in a Galaxy rotates at the same arc-speed around it’s center.
9)To figure out how many times a Black Hole exploded, divide the number of arms in its Galaxy by two.
10)Atoms of Hydrogen are created when Dark Matter (ejected from an exploding Black Hole initially at the speed of light squared) collides with other Dark Matter.
11)Dark Energy is Dark Matter, ejected from an exploding Black Hole (that does not collide with other Dark Matter) that goes out into space pushing other Galaxies away, hence, the expanding universe.
12)There is no single Big Bang, but there was a first one.
13)It takes the same amount of energy to make an atom from Dark Matter as is released when an atom is taken apart (as in an atomic explosion).
14)Mass stretching and coming apart into Dark Matter (thereby releasing energy) as it accelerates into a Black Hole adds to the spin velocity of a Black Hole.
15)A Black Hole explodes when the equatorial speed of a spinning Black Hole attains the speed of light, squared…when centrifugal force exceeds gravitational force.
16)All life evolved from Extremophile Bacterial growing, and feeding on, the bottom 500 meters of a planet’s, or moon’s, crust floating on a molten core.
17)All Petroleum Oil and Methane is a product of Extremophile Bacterial.
18)If you want to organic find life, or where life has been, look for planets or moons with Methane.
19)Synthetic Electronic Life (self-sustaining as a species) does exist, and it will on our planet.
William Peters
March 26, 2017

No, dark matter isn't the aether.