Watch: Four Gas Giants In Orbit Around Another Star For The First Time (Synopsis)

"The Beta Pic animation looked so cool that we’ve wanted to do more. We wanted to make one that was even more impactful for the audience and could begin to show what one of these systems looks like." -Jason Wang

In 2004, humanity was able to take the first direct image of an exoplanet around its parent star by going to infrared wavelengths. Four years later, the system HR 8799 was determined to have three (later upgraded to four) exoplanets orbiting it. They could all not only be imaged, but imaged over time. As the planets continue to move in their orbits, follow-up observations have continued to track them. 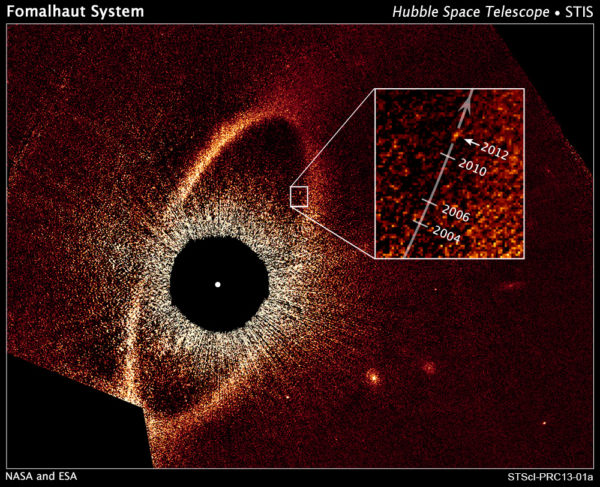 An exoplanet detected around the star Fomalhaut, seen to move in multiple images over time. Image credit: NASA, ESA, and P. Kalas, University of California, Berkeley and SETI Institute.

For the first time, we can directly determine the orbital period of planets around distant worlds from direct imaging. When the next generation of space and ground-based telescopes come online, we should be able to directly image worlds around thousands of stars, including Earth-like planets around the nearest ones.

Come get the full story in pictures, animations and no more than 200 words on this edition of Mostly Mute Monday.

Coronographic imaging with the Advanced Camera for Surveys, on the Hubble Space Telescope, has revealed a jupiter mass planetary companion, with confirmed common proper motion with its parent star, Fomalhaut. This would be the first robust bona fide direct imaging detection of an extrasolar planet…

How much like Earth is Kepler's new planet? How we'll find out!

"Life is not a miracle. It is a natural phenomenon, and can be expected to appear whenever there is a planet whose conditions duplicate those of the Earth." -Harold Urey One of the most exciting investigations going on right now in space is NASA's Kepler Mission, which is on the hunt for planets…

Comments of the Week #147: from spacetime's nature to the strangest moon of all

"Sometimes I even now feel like a stranger in my country. But I knew there would be problems because I had seen the world... Freedom is good, but it is not easy." -Katarina Witt Yes, as always, as another week goes by at Starts With A Bang! there have been a huge number of great stories we've…

The Nearest Sun-Like Star May Be As Miraculous As Our Own!

"Death comes to all, but great achievements build a monument which shall endure until the sun grows cold." -Ralph Waldo Emerson In the great cosmic ocean, there's only one planet that we know -- for certain -- has the right conditions and history to result in intelligent life: our own. Image…

40-Forbes? Not found... Something is missing.

It's up; just having trouble with the scheduler.

Ethan,
What is the significance of four gas giants in one solar system being found? Is it merely a trivial count of first observed, I think our solar system has three, Jupiter, Saturn, Neptune, or is it important in some way relating to a particular planet formation theory?

I stand corrected, forgot Uranus....sigh. It's always that one I forget. So we have four gas giants and this other solar system has four gas giants, does that indicate something about a sun type, planet type ratio?

Nope. Though a cooler sun allows more gas giants for the same density and size of protoplanetary disk, because there's a larger volume where H/He can remain captured by a planet without being blasted off by the star's radiation.

I remember at one time Carl Sagan said that gas giants were failed stars...and that many solar systems were binary. Are binary star systems then both 'cooler' stars since both stars are basically hydrogen? Or is there evidence of a mixed binary system where one can be hot, the other cool?

@6: our system isn't binary in the classic sense of having two stars, but keep in mind that Jupiter is twice as big as all the other planets put together. So it's pretty "binary" in the sense that most of the mass of the solar system that isn't the sun, is contained in just one other body.

Then you remember incorrectly. Jupiter needs to be ~50x heavier to be a star. And no, binary means "two". Nothing there about cooler.

eric: If jupiter were (IIRC) twice as heavy, it would be smaller,since the pressure of its own gravity would compress it more than the extra mass requires more room. It's very nearly (like a fraction of the weight) the biggest radius it's possible for a gas giant to be.

Friggin amazing what we are able to see at the present. The near future will be even more spectacular; given higher resolution means.

ok. I actually understand this. "4 Gas Giants", as in, the planets are in gaseous state. One of our solar systems planets is also "Gas Giant"-I'm forgot which one: ?Jupiter? the picture of the solar system in books is painted like it is solid, and the gravity on Jupiter is 7x the gravity on Earth: BUT the planet of Jupiter is actually a giant gas ball. SO: In THAT system, 4x Jupiter-like planets are orbiting a sun. Correct?

@Hazel-Connie #10: Correct. In our solar system, we have two gas giant planets, Jupiter and Saturn (the one with the big rings).

The other two very large planets, Neptune and Uranus, are described as "ice giants" -- they are a mix of gas and frozen gases, with probably a small rocky core in the center.

Even while the world suffers, investing in science is non-negotiable (Synopsis)