The Scientific Story Of How Each Element Was Made (Synopsis)

“It is the function of science to discover the existence of a general reign of order in nature and to find the causes governing this order. And this refers in equal measure to the relations of man - social and political - and to the entire universe as a whole.” -Dmitri Mendeleev

When the Big Bang first occurred, the Universe was filled with all the various particles and antiparticles making up the Standard Model, and perhaps still others yet to be discovered. But missing from the list were protons, neutrons, or any of the atomic nuclei key to the life-giving elements in our Universe today. Yet the Universe expanded, cooled, antimatter annihilated away, and the first elements began to take shape. 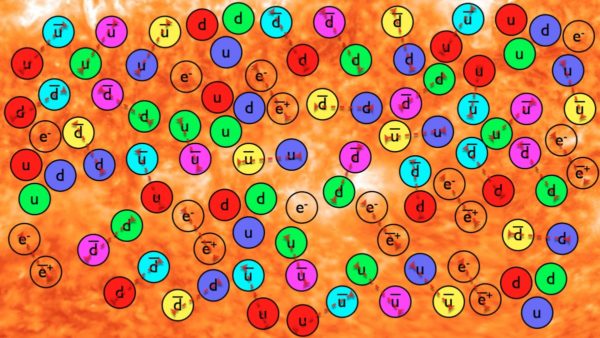 As matter and antimatter annihilate away in the early Universe, the leftover quarks and gluons cool to form stable protons and neutrons. Image credit: Ethan Siegel / Beyond The Galaxy.

After billions of years of cosmic evolution, we arrived at a Universe recognizable today: full of stars, planets, and the full complement of elements populating the periodic table. More than 100 elements are known today, 91 of which are found to occur naturally on Earth. Some were formed in the Big Bang, others were formed in stars, still others were formed in violent cosmic cataclysms or collisions. Yet every one has an origin whose story is now known, giving rise to all we interact with today. 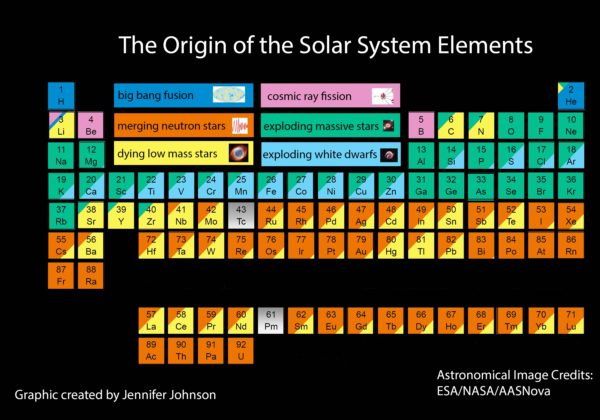 The most current, up-to-date image showing the primary origin of each of the elements that occur naturally in the periodic table. Neutron star mergers and supernovae may allow us to climb even higher than this table shows. Image credit: Jennifer Johnson; ESA/NASA/AASNova.

Come get the full story behind how all the elements were made in some fantastic pictures, visuals, and no more than 200 words on this edition of Mostly Mute Monday!

I've seen an article that posits that cosmic ray spallation isn't the only way to make lithium. About a quarter of the lithium in the universe is from primordial nucleosynthesis and a lot of the rest seems to be made from white dwarf novae:

They saw large quantities of beryllium-7 in the spectra of a white dwarf undergoing nova, which decays into lithium-7 in about a month and a half or so. I don't have access to the actual MNRAS paper described in the article (which doesn't mention the process), but this is how I think it might work. A nova happens when the accretion disk of a white dwarf in a binary system gets hot enough to ignite nuclear fusion, essentially temporarily creating a new star around the corpse of a dead one. Nuclear fusion releases a lot of high-energy particles (neutrons mostly), and perhaps some of them could be causing nuclear fission of some of the white dwarf's carbon/nitrogen/oxygen substance, producing unstable radioactive beryllium which eventually turns into lithium, just like in cosmic ray spallation. Could the same process also suffice to produce beryllium and boron?

@Anonymous #1: The main figure (annotated periodic table) shows exactly this: Lithium is mainly yellow ("dying low mass starts"), with most of the rest the pink corner ("cosmic ray fission", or what I would have called spallation), and a thin strip of dark blue ("big bang fusion") for the primordial Li-7.

How, do dying low mass stars create heavy elements? The chart has a lot of yellow up to element 70.

The production mechanism is a combination of R-process (rapid neutron capture) and Rp-process (rapid proton capture), which can happen during both Type Ia supernovae (white dwarf deflagation) and neutron-star mergers.

See Wikipedia "Stellar nucleosynthesis" for an overview, with separate articles on R-process etc.

I think this is what you are looking for:
https://en.wikipedia.org/wiki/Supernova_nucleosynthesis

It would be great if Walt Loveland (or a collaborator) could update The Elements Beyond Uranium. I was going to recommend it to folks who wanted to learn more about the discovery of the man-made elements...then I realized that it only covers about 15 of them, and there are now 24. So it misses a full third! Oh well, still a decent book.

Sinisa @5. That's fine if you interpret dying low mass stars (complete with a picture of a planetary nebula) as type 1a SN. However right next to it the blue block is exploding white dwarfs, which sounds like the 1a SNs.

I think the confusion comes from image association. There are nova's, there supernova's and there are many kinds of supernova. Type 1a SN are probably most talked about because they are used as standard candles in other aspects of cosmology.. but here it's not all about them.

from the article i linked earlier: "Virtually all of stellar nucleosynthesis occurs in stars that are massive enough to end in Type II supernovae"

what happens is what Michael #4 wrote.. r-process. there's also the p-process... but if i recal, the r yields more.

p.s. notice that it talks about massive stars, more than 8 solar masses. Below that, you get white dwarfs, but above that you get what I linked above.

I heard that you demonstration about the true elements, and revealed the space, time, and matters. Did you analyze the exposure which is given by the conductance quantum, Planck's constant, and per mass square? I only study more about the fundamental electricity and magnetism, rarely understood by over quantum mechanism. But mainly algebra physic...

I heard that you demonstration about the true elements, and revealed the space, time, and matters. Did you analyze the exposure which is given by the conductance quantum, Planck's constant, and per mass square?