Discovery Of A Young, Dead Galaxy Creates A Huge Puzzle For Astronomers (Synopsis)

"This new insight may force us to rethink the whole cosmological context of how galaxies burn out early on and evolve into local elliptical-shaped galaxies. Perhaps we have been blind to the fact that early "dead" galaxies could in fact be disks, simply because we haven't been able to resolve them." -Sune Toft

How do galaxies form and grow? The theory behind it is simple and straightforward. You start with a collection of normal-and-dark matter, the normal matter collects in the center, pancakes, and forms stars over time. A little later, more gas falls in, and the galaxy continues to form new stars over time. It’s only when a gravitational interaction or a major merger occurs that a galaxy goes from active to “dead and red,” in the form of a giant elliptical. 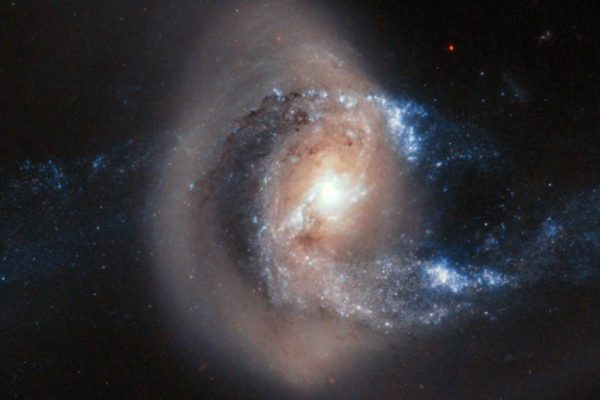 Galaxy mergers are common, and as time goes on, all the gravitationally bound galaxies in groups and clusters will eventually merge into a single galaxy at the core of each bound structure. When major mergers occur, the result is almost always a giant elliptical. Image credit: NASA, ESA and the Hubble Heritage Team.

At least, that’s the theory. But a new analysis of a very unusual galaxy, MACS2129-1, shows that despite being just 3 billion years old, it’s already “dead and red,” but it’s somehow still a spiral! With no evidence for a major merger and no conventional explanation for this otherwise, this young, dead galaxy creates a huge puzzle for astronomers.

This artist's concept shows what the young, dead, disk galaxy MACS2129-1, right, would look like when compared with the Milky Way galaxy, left. Although three times as massive as the Milky Way, it is only half the size. MACS2129-1 is also spinning more than twice as fast as the Milky Way. Note that regions of Milky Way are blue from bursts of star formation, while the young, dead galaxy is yellow, signifying an older star population and no new star birth. MACS2129-1 appears redder overall because of its cosmic redshift. Image credit: NASA, ESA and Z. Levay (STScI).

What do we know so far? Come find out on this edition of Mostly Mute Monday!

This galaxy was conquered by the Borg. Anyone can plainly see that.

Why do you spend so much time with your head in outer space when we’ve got a crisis down here on earth?
When we’re frying in 250 degrees no one will be talking about some damn dead galaxies out there.
LISTEN TO THIS!
http://www.express.co.uk/news/science/824088/Stephen-Hawking-Donald-Tru…

@skl,
The Earth is not Venus, the planets are not exchanging orbits or climates any time soon. Relax. Unless, you really do wish to be upset, in that case, knock yourself out.
Also remember that Stephen has a been wrong with a lot of his predictions, and is a prankster.

What countries' GHGs are increasing most rapidly?

It's kind of funny to punctuate your complaint about Ethan spending so much time with his head in outer space by linking to a guy best known for his work on black holes.

Yes Ethan! Why do you continue to ignore climate change!?? Can't you see what happened to Venus when Trump pulled out of the Climate Accords on that planet? ...And now Trump's doing it here and you stay silent? Didn't you hear Hawking? 250 degrees! That is not even American degrees. That is European super-hot degrees. Being that Trump only realistically has 3 1/2 years left in office that means Earth will be hot enough to melt lead on its surface in a short 40 months from now! We're all dead! Me. You. Everyone. Dead!! By your silence I can only assume your payment from Big Oil came through.

Of course, if you really want to complain about pollution, one might consider going to China or India where they have next to no pollution laws and explaining how they should stop it before the planet goes super nova. I'm sure they will understand...