Is the inflationary Universe a scientific theory? Not anymore

"I know of no other scientist, no other theoretical physicist alive who has a clearer focus on whether our theories and ideas are relevant to the real world. And that's always what he's after." -Neil Turok, on Paul Steinhardt

The inflationary Universe is one of the most revolutionary new ways of looking at the cosmos to come out of the last 40 years of science. Instead of going all the way back to a singularity from which time, space, matter, and energy all emerged, cosmic inflation posits a different state that gave rise to our hot, dense, matter-and-radiation-filled Universe. With energy inherent to space itself, brought about via coupling to a new field known as the inflaton, this exponentially expanding epoch preceded what we presently know as the observable Universe.

The quantum fluctuations that occur during inflation do indeed get stretched across the Universe, but the larger feature of inflation is that the Universe gets stretched flat, removing any pre-existing curvature. Image credit: E. Siegel / Beyond The Galaxy.

Inflation has its attractive features, and can explain many features that are observed to be true. In addition, it has made successful predictions that were borne out, years or even decades later, by detailed observations of the Big Bang’s leftover glow. But there’s a darker side to inflation: the phenomenon of “infinite model-building,” where theorists churn out model after model after model, predicting every imaginable outcome, and therefore, predicting nothing at all. 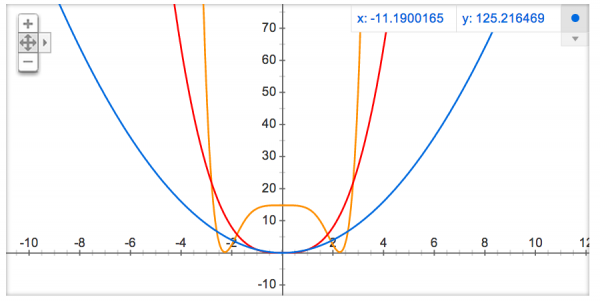 Three possible 'hills-and-valleys' potentials that could describe cosmic inflation. Though they give somewhat different results for the various parameters of the Universe, there is no motivation for choosing one model over another. Created with Google's graph tool. Image credit: E. Siegel.

Although inflation has some incredible features that no other competitor can match, it’s not a theory without its flaws.

What Happened Before The Big Bang?

“The aim of science is not to open the door to infinite wisdom, but to set a limit to infinite error.” -Bertolt Brecht One of the most frequent questions I get about the Universe -- as a cosmologist -- isn't quite about the Big Bang in and of itself. The expansion of the Universe in reverse; image…

The Big Bang Wasn't The Beginning, After All

"Despite its name, the big bang theory is not really a theory of a bang at all. It is really only a theory of the aftermath of a bang." -Alan Guth Did the Universe begin with the Big Bang? When we discovered the cosmic microwave background, and its properties matched exactly the prediction of the…

Comments of the Week #65: from the highest temperature to the Earth's tilt

“We are a singularity that makes music out of noise because we must hurry. We make a harvest of loneliness and desiring in the blank wasteland of the cosmos.” -Jack Gilbert Although you had lots to say, it came almost exclusively on two of our posts, so let's jump right in and see if we can expand…

The Beginning of the Universe and the Limit of Knowledge

"Despite its name, the big bang theory is not really a theory of a bang at all. It is really only a theory of the aftermath of a bang." -Alan Guth So you finally understand it. The Big Bang tells us that the Universe was hotter, denser, and expanding at a faster rate in the past. Image credit:…

Why we could still have Black Holes then? We think energy density can become arbitrarily high in the center of BH, but somehow inflation never gets triggered?

@ Frank
"Why we could still have Black Holes then? We think energy density can become arbitrarily high in the center of BH, but somehow inflation never gets triggered?"

maybe it does... on the other side.. creating a new universe bubble. The full solution to schwartzchild metric does have a white hole on the "other side". Personally, I don't think it does, but it's a good question.

I think Sabine Hossenfelder says it precisely and elegantly:
"It is this abundance of useless models that gives rise to the criticism that inflation is not a scientific theory. And on that account, the criticism is justified. It’s not good scientific practice. It is a practice that, to say it bluntly, has become commonplace because it results in papers, not because it advances science."

CFT,
I agree.
Btw, it's confusing that comments on her essay (including mine) don't show up here, since it's the same topic. I applaud her direct challenge to science-by-authority, and her endorsement of Steinhardt's "Big Bounce."

"As alternative to inflation, Steinhardt et al. promote a “big bounce.” In this scenario, the universe’s current expansion was preceded by a phase of contraction, yielding similar benefits to inflation."

I've advocated a version of that cosmology (the "bang/ crunch) for many years as the only cosmology that answers the question, "Where did it all come from 'in the beginning'?"
Answer: There was no "beginning" as in magical creation of everything out of nothing. Rather... a perpetually, eternally oscillating cosmos... time span beyond our ability to measure.

This gives us science fiction writers much to think about. To hell with what's right or wrong, just keep the theories coming. Now I am seeing empty field holes throughout the universe which fluctuate with the rise and fall of energy density. Entering one of these spaces would allow for travel to the other side at inflationary speeds; or instantaneously. I like it. It answers one of my biggest space travel problems.

Re: #6,
Fantasies can be very entertaining and comforting as escapes from the mundane reality of limits like gravity holding us down and the speed limit of light (which no mass can reach) keeping us from quick (or instantaneous) travel to "galaxies, far away." The temptation is to wish that sci-fi were real science and try very hard to "make it so" (like Ethan does.) All that motivation ("anything is possible, some say) does not make fantasy become reality.
Science's job is to investigate and understand (and sometimes predict) the independently existing cosmos, not just to invent endless toy models and play with them.
Just a little philosophy this evening.

So it's now "Starts With a Bloat"?

IT IS ALL ABOUT HOW TO DESIGN AN ESCAPE BLACK HOLE TO ESCAPE FROM THE FACT OF DIVINE CREATION .........SHAME .