"When we meet real tragedy in life, we can react in two ways - either by losing hope and falling into self-destructive habits, or by using the challenge to find our inner strength." -Dalai Lama 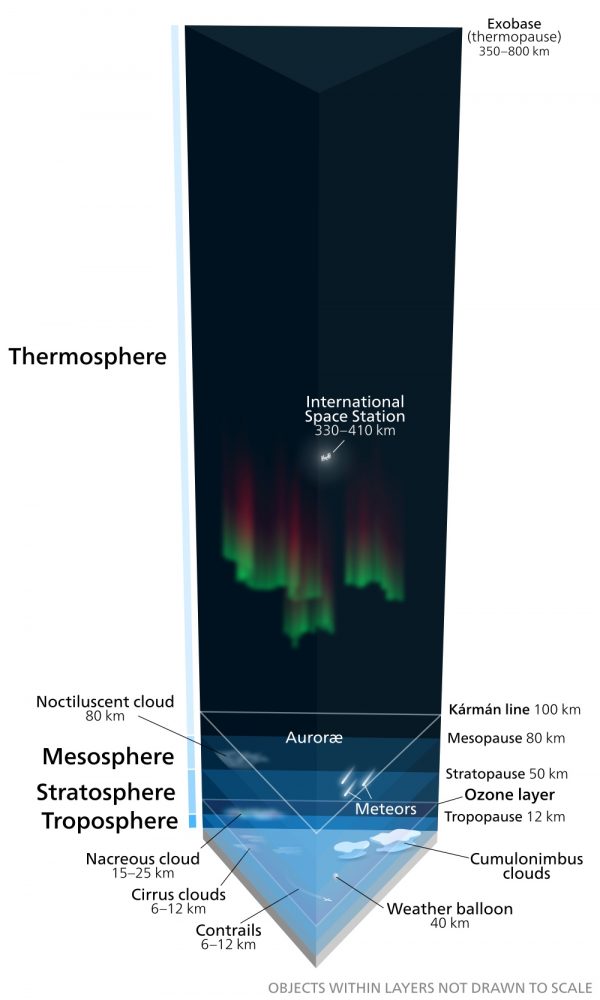 The layers of Earth's atmosphere, as shown here to scale, go up far higher than the typically-defined boundary of space. Every object in low-Earth orbit is subject to atmospheric drag at some level. Image credit: Wikimedia Commons user Kelvinsong.

Although each oxygen molecule might travel for a kilometer before striking another, the presence of these molecules is enough to slowly produce a drag on Hubble. Over the timespan of years and decades, it loses altitude and begins to fall. If we do nothing, then by the late 2020s to the mid-2030s, it will uncontrollably de-orbit on its own. Our greatest optical observatory will be lost, and there are no plans to save it. 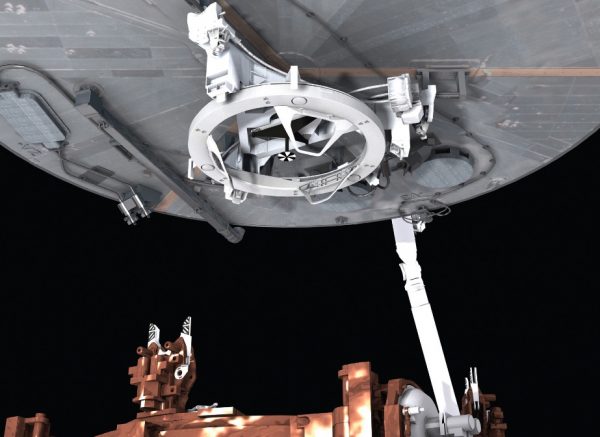 The soft capture mechanism installed on Hubble (illustration) uses a Low Impact Docking System (LIDS) interface and associated relative navigation targets for future rendezvous, capture, and docking operations. The system’s LIDS interface is designed to be compatible with the rendezvous and docking systems to be used on the next-generation space transportation vehicle. Image credit: NASA.

Come learn how the Hubble Space Telescope is falling, what we can do, and why we need to act now.

Get a Kickstarter-thingy and you might get enough funding by the end of the month.

I think there are always some old satellites worthy of saving.
So we should try to find a general solution.

Maybe NASA should try to design little remote controlled space drones that can fly to any satellite and attach itself to it
(imagine one or multiple drones attached to each satellite).

And imagine afterwards, movements of the satellite controlled by those attached drones.

They could be used to increase lifetime of old satellites, as well as they could take them down for a fast and controlled reentry (to keep Earth's orbit clean).

I felt the same way about Skylab, and waiting for the space shuttle to save it is what killed it. At this point they need to do some cost analysis and determine what the cost of putting another telescope in orbit (with more powerful instrumentation) versus saving the dated Hubble would be.

@Frank @2,
Sounds interesting but for a few possible complications.
Having a drone that could move other satellites around could be perceived (or actually be) as a weapon by other nations. It in theory sound like some of the anti-satellite weaponry I've read about.
The other problem is the orbits. You might have to have multiple drones set up for the different kinds of orbits, as you would probably spend a great deal of fuel just to match the same location in orbit while evading thousands of pieces of space junk.

@Elle H.C.,
The defunct space shuttle cost broke down around 450 million dollars a launch. I'm not sure you could reasonably expect that much in a month or two. Developing an entirely new launch system would put that figure in the billions of dollars.
.
Maybe the SpaceX people might make a publicity thing out of it.

How big of a rocket would it take to push it into a safe position? There are regularly going 'supply' rockets into space, so I'm guessing that an extra package going along wouldn't cost that much.

I'm here indeed thinking of a Space X like enterprise to figure it all out. There are 7 billion people on this planet I'm sure you can set up anywhere a company that could figure out a solution. Even India and China are up there …

Now I might be exaggerating but I have the impression that students that finish a PhD these days have an understanding of technology and tools available that's ten times more advanced then 20 years ago, they could run a simulation on a laptop, by components for a fraction etc.

@Elle H.C.,
While I do like your ingenuity in thinking about ways to save Hubble, also consider the alternative of replacement. Sometimes keeping an older piece of technology ends up being far more expensive and less productive than originally thought, this is made more complicated because of the cost of sending one type of craft for replacement, versus another kind of craft for repair or orbit alteration might also be significant.

Well the James Webb Space Telescope is going to be launched around this time next year and it will be the one that takes science a step further, so Hubble could be sold as a kind of secondhand telescope to a bunch of enthusiasts.

Anyway they could also give a couple of billions to NASA to do the update, I don't care the money spend flows anyhow back into the economy.

I just checked and it appears that at 27,000 lbs a falcon 9 could launch a replacement (it can deliver 50,000 lbs to a low earth orbit. But the science community has determines that the Webb telescope with its different bands is a better use of funds. Further if this article is correct : http://www.iflscience.com/space/telescopes-ground-may-be-cheaper-hubble…
"When E-ELT observations start in 2024, the state-of-the-art correction for atmospheric distortion will allow it to provide images 16 times sharper than those taken by Hubble."

This does suggest that at least for wavelenghts that make it to the ground ground based scopes are better, the web being an example of a telescope that operates at wavelenghts blocked by the atmosphere.
So for example you would not replace Hubble in the visible light range but in ultraviolet, since the Webb telescope handles the infrared. (so it can detected strongly red shifted objects)

I'm with Elle. This won't be cheap and I would rather NASA spend their government money on the new stuff - so much to do and so much more to learn
Leave conservation to philanthropy. Or private. Surely a few of the fats cats could get their heart behind this.

We got bigger things to worry about. Like a 75% decline in insects over 30 years - now THAS a scary problem. Only stayed on the from page of CNN for half a day - Trumps rants seem to be more important.

@Steve Blackband #10,
Relax. Just relax and put things into perspective with George Carlin.
.
https://www.youtube.com/watch?v=7W33HRc1A6c
.
The planet has been through a lot worse than us.
There is nothing wrong with the planet. The planet is fine, it's the people who are in trouble.