Not Just the Carbon Cycle

You’ve heard of the carbon cycle, maybe even the nitrogen cycle. But have you given much thought lately to the sulfur cycle? New research in last week’s Science suggests that we should be paying a bit more attention to the way this element moves through the atmosphere, biosphere, oceans and land. Over the last 500 million years, sulfur seems to have played a fairly crucial role in keeping the oxygen levels in the atmosphere at a nice, breathable 20%.

It is microbes and weather that do the work. Microorganisms in the ocean take in sulfur in the form of dissolved sulfate – that is, in a sulfur- oxygen compound – and release it as oxygen-less sulfide, together with free oxygen. The sulfide combines with iron and sinks to the ocean floor to be buried as iron pyrite. On land, an opposite process takes place: Ancient pyrite formations are exposed to weathering, and their sulfur washes into the oceans as sulfate. 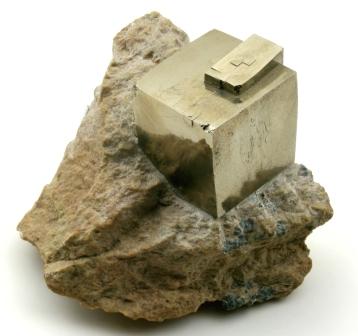 What scientists hadn’t really understood until now was the importance of this process in regulating oxygen. In fact, it was seen as a bit of a sidebar in the story of the sulfur cycle, with most of the ocean’s sulfur reaching the ocean floor through a more basic evaporation and settling process.

The researchers – the Institute’s Dr. Itay Halevy, Caltech’s Dr. Woodward Fischer and the U. of Wisconsin’s Dr. Shanan Peters – were actually looking for evidence of this second process in a very large, very detailed geological database maintained by Peters. But it turned out that record of evaporite minerals was irregular – depending on conditions like partially isolated shallow sea basins – while the pyrite sub-cycle remained steady. According to the numbers, throughout the whole 550 million years something like 80% of the sulfur that has left the ocean has done so as pyrite. The bottom line: A lot of oxygen has cycled in and out of the atmosphere on the backs of sulfur atoms – possibly almost as much as goes around in the carbon cycle.

You should take part in a contest for amongst the finest blogs on the internet. I'll advocate this site!