The Women Who Made the Science Possible

Here are some more unsung heroes of research: scanners (the human kind). In the 1950s, Donald Glaser invented the bubble chamber – a way to track infinitesimally small quantum particles as they winked in and out of existence. The idea – which may or may not have been tested in beer – was to create a large chamber of liquid under pressure next to a particle accelerator. As the beams hit their target, producing sprays of new types of short-lived particles, these energetic particles would leave tracks of bubbles in the liquid (usually hydrogen). Everything was caught on arrays of special high-speed cameras. 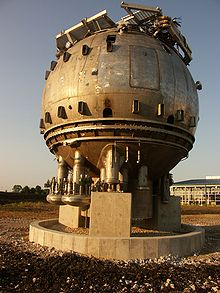 And this is where high-tech had not quite caught up. Tens of thousands of images were produced in a single day’s run, and each frame had to be carefully examined to find particle tracks. So dozens of people were hired as scanners. These scanners were mostly women – one can speculate as to why that would be the case. Though the work was routine – done in a darkened room on a backlit table or, later, an apparatus for marking and moving them – it required alertness and training, as well as the physical dexterity necessary to keep the frames moving along.

The Weizmann Institute scanners – who worked from the 1960s until the unit was closed in 1980 – received giant rolls of film from the top accelerators: SLAC at Stanford, Brookhaven, Fermilab and CERN. Institute scientists were engaged in group research in all of these labs, and the Physics faculty undertook a part of the enormous scanning effort. (An Institute physicist writing in 1963 said that three days’ worth of results would take two years of work to interpret.)

The women interviewed for the article were an assorted group, thrown together by their work. Most had started young; for some it was their first job after completing their army service. Only one had previous scientific training: Anna, an immigrant from the Soviet Union. Yet out of this melting pot emerged a unique solidarity. They called themselves “the scanners,” and the group grew into a sort of family – one made up of women from all sorts of backgrounds. The unit was disbanded in 1980, but the group stayed close. All continued working in various jobs at the Weizmann Institute, and the women continued to meet, talk, celebrate together and give one another support (and, like all families, to argue once in a while). That sort of natural, life-long support group was rare even then; it is almost non-existent nowadays.

Computers did, of course, catch up. The ability to merge detector and computer, along with the new accelerators in which two beams were collided, would supersede the bubble chambers and the need for human scanners.

But those women are justly proud of their contributions to particle physics. They may not be able to explain exactly how the particles are formed, but they can tell you exactly what combination of lines and squiggles on a bubble-chamber frame is evidence of one. Essentially, more than two decades of experimental particle physics depended on the hard work and loyalty of groups of scanners like that at the Weizmann Institute. That’s something to think about the next time you’re watching the bubbles float up in your glass of beer.