With two days of digging and one day of backfilling left at Stensö Castle, trenches A and B have already given a rich harvest of new information.

The western perimeter wall between the castle's two towers was curved or angled, not straight, consisted mainly of greystone, and was 2.3 m thick. It has been very determinedly torn down, probably because someone decided to make Stensö Castle indefensible – effectively removing it from the war game's board.

As to the lifestyle at the castle, the many animal bones from trench B have the potential to tell us a lot about meals eaten there. Until today we haven't known at what time the layer with stones and bones was laid down, but today Malin found an eminently datable object in it, answering that question with a high degree of certainty. It's a small silver annular brooch shaped like an inverted droplet and studded with six small blue glass domes, most of which are crizzled (Sw. glaspest). According to Pia Melin and Göran Tegnér, it dates from 1250-1350, more probably the earlier and middle part of that interval. This gives us a good chronological foothold between c. 1200, when the first part of the castle was built, and 1369, when Lord Holmger and Lady Sigrid celebrated their wedding and Stensö entered the historical record. 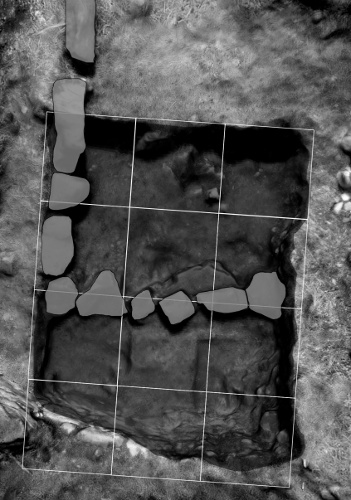 Trench C has the most interesting and complicated stratigraphy of the three. We're now pretty sure that the rectangular stone house foundation partly visible above turf, and on which I orientated the trench, post-dates the end of the castle's lifetime as a defensible structure. The foundation overlays a stone block that's most likely fallen from the perimeter wall's inner face, it consists of similar blocks, and it supports a particularly huge example of the same blocks. Also there is much eroded brick both under and on top of the foundation stones. So the foundation represents a house built among the castle's ruins. Judging from the amount of animal bones in it, it was a dwelling. But we have only one tiny piece of pottery from it (glazed in yellowish brown on both sides, a post-Medieval trait) and we know nothing about its internal organisation. The castle was eroding before the house was built and it continued to erode after the house was abandoned, covering part of its remains.

I found the marleka concretion disc right next to one of the house's foundation stones. This has been seen in Medieval house foundations at Åkroken in nearby Nyköping, and probably speaks of a custom of propitious building inauguration deposits. The custom survived into the 20th century though later usually involving steel implements and other magical charms.

All in all we haven't yet reached the castle's active use period in trench C. We're putting the rest of our work there into the lowest-lying part of the trench, farthest from the perimeter wall. With luck we may still extract Medieval material here before we have to close the trench.

After four days of rubble removal in trench A, we found the south wall of Stensö Castle's northern tower. Note how the wall facing (left) ends, and a pale mass of wall core (lower right) emerges out of the tower. This is the castle's previously unseen western perimeter wall. Our first week of…

Stensö castle, trench C, the part along the perimeter wall. Note the ashlar. Drove down to Vikbolandet on Sunday night with my excellent colleague Ethan Aines from Stanford, and we were met at expedition HQ by seven of my Umeå students from last autumn semester. Very pleased to see them again!…

This year's first week of fieldwork at Stensö Castle went exceptionally well, even though I drove a camper van belonging to a team member into a ditch. We're a team of thirteen, four of whom took part in last year's fieldwork at the site. All except me and co-director Ethan Aines are Umeå…

Ruin On An Islet

Christian Loven's plan of Landsjö Islet with letters marking on-going fieldwork. Landsjö castle is on a high islet in the lake next to the modern manor house. Nobody ever goes there. The ruins are covered by vegetation and they're in bad shape: only along the western side of the islet do they…

"Greystone" means nothing to me, an American geologist. I'm sure it's a translation of a meaningful Swedish, or local, term, but it needs clarification for international readers.

I wonder if the fracture of pottery could be a german beercan from around 1350 ?

When you say "house" here, are you using the Swedish word "hus"? If so, that presumably means the structure you've found the foundation of was just a building (the function of which you don't know), rather than a residential dwelling?

When I say "house" here, I really mean "horse". Nooo, I mean a structure of indeterminate function.

Congratulations, what a perfect, beautiful little find! So the layer of rocks represents some activity conducted while the castle was fully operating as a castle? Material brought in as fill to level or elevate a surface, or a stockpile of missiles? Fascinating. I remember several Time Team episodes where they made a big deal about Anglo-Saxon settlers eschewing Roman ruins in favor of timber buildings. It seemed to me even a derelict Roman house might be a nice place to live compared to, say, a pit house, but what do I know, I'd love to live in a ruined castle.

I didn't know about the foundation deposits of steel etc. you mention surviving so late! So that would make the disc a direct descendent of the gullgubbar? That we apparently still call them fairy stones is sure suggestive, I wish we knew what they were thinking.

Kevin, yes, I think the stone layer in trench B is probably levelling material. It seems to be sitting on sloping bedrock.

The gullgubbar don't seem to have been foundation deposits: they ended up in postholes because people applied them to the posts during the lifetime of the building.

Are their any excisting photos of the glazed pottery ?
My colleague - medieval archaelogist Martin Pávon, are an expert in medieval pottery.
But if it is glazed on both sides, you are probably right.

I'll take photos of the pottery when time permits.

I interprets "gråsten" as the ordinary granite/gneiss stones you find in the soil, rounded by transport during the glaciations and later deliberately broken up into easily handled pieces. It is a bit disappointing that the stonemasons had not reached a higher level of craftmanship.
--- ---
"The northern tower was a green ruin mound" and be grateful for that! The castle ruin with a tower reminds me of the cursed castle Fafhrd and the Mouser explore in Fritz Leiber's "Swords against Death". If you find a layer of crushed human bone it will confirm my suspicions. Artefacts with Simorgyan glyphs are better left alone.

Martin thank you I did not know gullgubbar originally appeared on the posts!

Birger you mean as opposed to quarried stone? Wouldn't that have largely been a logistical problem? I wonder where the nearest suitable quarry to the castle might have been.

They could have squared the “gråsten”, if they had been decent stone masons who didn't mind dying of pneumoconiosis.

BTW, you might not want to liberally coat your baby with talcum powder, if you have one. Or at least, if you do, keep it concentrated on the nether end.
http://en.wikipedia.org/wiki/Pneumoconiosis_due_to_talc_dust

Oh I see. Typical Europeans, luxuriating in history, to quibble over the finer points of masonry when you have a bleeping castle in your back yard. I'm sure it was the finest building most of those people had seen.

Kevin @6: I have to imagine that a well-built grub-hut was warmer than a half-broken villa. Also, a Roman villa really sticks out in the landscape. If there were maurading bands of whomever out there, I'd much rather be in an undistinugished hobbit-hole than a big old stone castle/villa.

I learn new things about terminology in your blog. It had never reached my attention that "brooch" was correct for "broach", the way it is commonly spelled in 'merica. I was also not very familiar with the term "crizzled", even though I've seen plenty of it.

I'm always happy to broach the subject of brooches.

"In 1999, images went round the world of druids and other protesters chanting, weeping and trying to block the diggers from dragging the ancient timbers of Seahenge out of the silt and removing them from the beach."

(OT) -If you like to mock extremely unbelievable B-films, in real time, in the (virtual) company of other skeptics there is a thing called” Mock The Movie”
Next event is “Hell Comes to Frogtown” to be viewed Wednesday at 9 p.m. Eastern time (American) http://freethoughtblogs.com/almostdiamonds/2014/07/07/mock-the-movie-wh…

Interplanetary archaeology? If you want a sample of previous ”mock the movie” sessions, here is “Mock The Movie: Total Recall transcript”
(The film where Arnold kills a hundred baddies while breaking every single law of physics) http://freethoughtblogs.com/lousycanuck/2013/08/01/mock-the-movie-total…

If only bored workers could be trusted to take no "shortcuts" and occasionally toss away stuff without examining them, archaeological digs would be a great way to provide meaningful jobs to a lot ofe unemployed.
----
(OT) Jeez, this dude has reached level 1000.
“Swede builds crossbow to fight vampires” http://www.thelocal.se/20140708/swede-builds-crossbow-to-fight-vampires

Archaeological digs would be a great way to provide meaningful jobs to unemployed archaeologists.