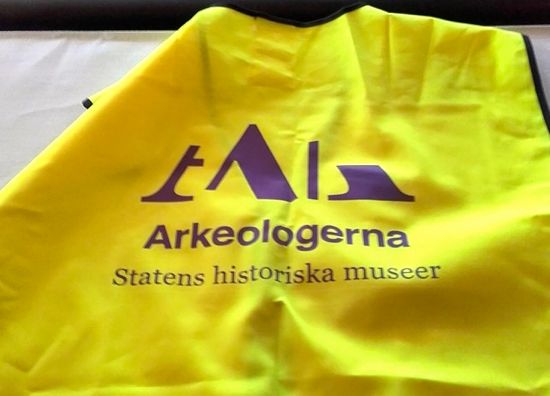 Sweden’s largest and oldest contract archaeology organisation with five units spread across the country is known as ”UV”. This is an old in-house abbreviation that means either uppdragsverksamheten or undersökningsverksamheten, “the contract section” or “the investigation section”. After more than half a century as part of the National Heritage Board, UV was recently severed from that organisation and grafted onto the Swedish History Museum’s org chart. The reason for this change is that the National Heritage Board is responsible for evaluating the quality of Swedish contract archaeology, and hasn’t been entirely credible in this role while also itself running the country’s biggest excavation units in competition with the other ones they are tasked with evaluating.

“UV” was never a great name. Only archaeologists understood quite what it referred to. So today the organisation has unveiled their new name and logo.

The new name is Arkeologerna, “The Archaeologists”.

This is like if a bank started calling itself “The Bank”, a hairdresser “The Hairdresser”, a railway company “The Train” or a grocery store “The Store”. The choice of name is hostile and confusing in relation to the hundreds of non-UV archaeologists who are professionally active in Sweden. Hostile because it says "We are the archaeologists, you are not" to colleagues. Confusing because "the archaeologists" is what everyone calls our entire business.

I hope for a new name change soon.

a railway company “The Train”

We have something close to this in the US with Amtrak. The name would imply that they are the only train company in the US. They have a de facto monopoly on intercity rail travel, true, but there are several private companies in the rail freight business, and it is these companies that own most of the tracks in the US, including the one that runs through my town. There are also commuter rail systems run by agencies that aren't Amtrak, some of which cross state lines (e.g., Boston's MBTA serves Providence, which is in Rhode Island, not Massachusetts).

Still, at least Amtrak has an effective monopoly on US intercity rail travel, and they operate almost exclusively in the US (there are two or three lines that cross the Canadian border, but only serve US points from Canada). "The Archaeologists" sounds like a worldwide conspiracy, a scientific version of the Trilateral Commission or Bavarian Illuminati.

Also agreed that UV was a poorly chosen name. Most people associate those letters with the kind of light that gives you sunburn (admittedly, this is an occupational hazard in archaeology if you do field work).