The Lovecraftian Horror of French 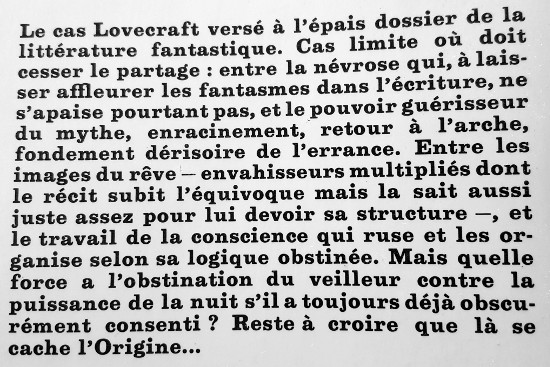 I bought a used copy of Maurice Lévy's Lovecraft ou du fantastique (Paris 1972) at the Fantastika 2016 scifi con, and now I'm picking my way through it with the aid of a dictionary. S.T. Joshi has published an English translation, Lovecraft: A Study in the Fantastic (Detroit 1988).

Here's how little of Lévy's literary French I understand without a dictionary. This back-cover blurb is a particularly hairy piece of writing, I should say.

The case of Lovecraft … the thick volume of fantastic literature. A limited case where … should cease: between a neurosis which, while it let phantasms bloom in writing, never would become quiet, and the … power of myth, rootedness, the return to …, modest foundation of … . Between the imagery of dreams – innumerable invaders of which the story … the equivocal but knew it also just well enough to become its structure –, and the work of wakefulness which … and organises them according to its persistent logic. But what power does the wakeful man's persistence have against the might of the night if he has already quietly consented? … believe that the Origin conceals itself there...

Hah!
Surely it adds an additional dimension that the analysis now seems to be stuttered by one of HPL:s own witness-to-the-unthinkable-and-now-on-the-brink-of-insanity characters.

The French have a bit of a reputation for impenetrable writing styles in nonfiction. The language in that blurb reminds me of the French philosophers Alan Sokal was critiquing in the aftermath of his parody "Transgressing the Boundaries: Toward a Transformative Hermeneutics of Quantum Gravity". If you managed to get past these philosophers' opaque phrasing, you often find that there is no real content at all. In one egregious example, the writer equated his fifth limb to the square root of -1. I don't know how much of a math background Martin has, but anyone who has taken advanced high school algebra can let their inner 12-year-old make the obvious joke.

If it can make you feel better, I'm not sure I can understand that text much better than you, although I'm French :D

You're very kind! Dérisoire seems to mean ridiculous rather than modest.

Eric, yes, good book. Lacan was the sqrt(-1) guy. Chomsky once said that to him, Lacan always seemed just an amusing charlatan.

THE antithesis to this is the clear prose they require in New Scientist. To the point, without dumbing down the subject.

Time Travel Thesis http://xkcd.com/1716/
I think the advice of the time-traveller applies to 99% of the faux-intellectual drivel that is written in opaque prose.

This is indeed a most convoluted text, even for a native speaker :) Here an attempt at translating it to English :

"The Lovecraft case being added to the large file of Fantastic literature. Borderline case where the border must be set : between nevrosis which, thouhg it lets fantasms appear in the writing, does not appease itself, and the healing powerof myth, return to the arche (*as in archetype), woefully inadequate basis for the aimless wandering.
Between the images coming from the dream - demultiplied invaders whose ambiguity is weighting on a tale that also knows how much it of its structure derives from it (ie : the dream) -, and the work of a consciousness that ruses and organise them (the images) accordint to its own obstinate logic.
But what strenght does the watchman (ie he who stays awake) against night's power if he has in fact always inconciously agreed ? It remains to believe that there is hidden the Origine."