By aardvarchaeology on November 7, 2016.

My detectorist friend and long-time collaborator Svante Tibell found a seal matrix in the field next to Skällvik Castle this past summer. In the Middle Ages of Sweden, people of means didn't sign their names to documents. They carried seals around, with which they made imprints into chalk-mixed wax, and these were affixed to paperwork such as property deeds and wills. If you lost your seal matrix, you lost your ability to sign documents – and you theoretically gave that ability to whoever found your seal. When people died during this period, their seal matrices were carefully destroyed. Sometimes the pieces were buried with the dead person, such as in the case of Svante Nilsson (obiit 1512).

The seal matrix from Skällvik shows the letter T in a shield. This device is known from a different seal under a surviving document from 1331, around the time when the castle was built. And around the edge of the matrix is as usual an inscription. I have no training in reading Medieval writing, so I took the matrix to the National Archives, where Roger Axelsson and his colleagues enthusiastically helped me make sense of it.

According to Roger & Co, this is what the seal's inscription says. The letters within parentheses are somewhat uncertain.

Annoyingly, the two completely illegible letters are part of this woman's name. But Roger has a suggestion for who her husband Sune may be: Sune Ingvaldsson, who lived in Östergötland about the right time and whose wife's name has been lost to history. The couple chose to be buried in Hällestad, a peripheral parish in the forest of NW Östergötland.

There's one more annoying detail here, says Roger. The man with the similar T seal from 1331 was named Thorberg. But there is no known female name T_sa from the time. Why then has this woman got a T on her shield? I wonder if our unnamed lady might have been using her father's coat of arms.

Anyway, our little points of annoyance are probably insignificant compared to how Sune's wife felt when she dropped her seal into the sea just off Skällvik Castle's dock, some time in the mid-14th century. 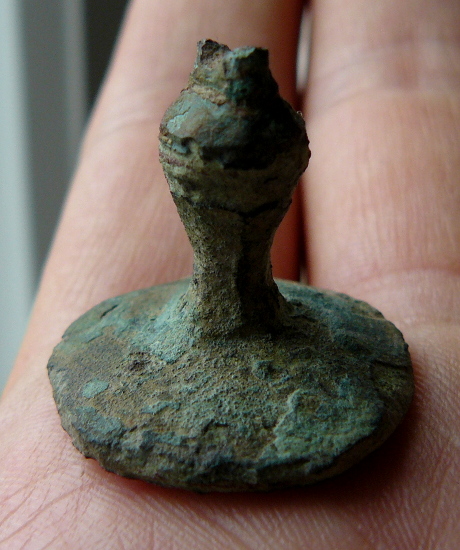