With nanotechnology rapidly advancing, the sci-fi dream of a Star Trek replicator becomes increasingly less fantastic. But such radical technology would, in theory, require the kind of subatomic manipulation that far exceeds current capabilities. Scientists lack both the equipment and the fundamental knowledge of quantum mechanics (the Standard Model, for all its elegance, remains incomplete) to build items from the raw stuff of quarks, gluons, and electrons . . . but what about alchemy? 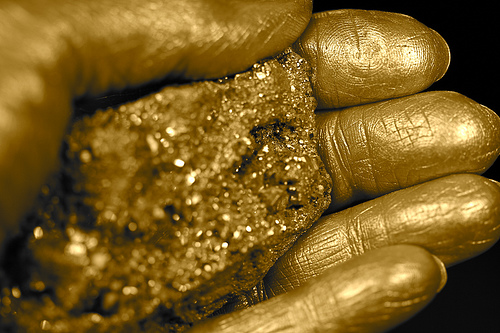 Even Isaac Newton, credited with the dawn of the Age of Reason, felt the mystical draw of alchemy, working in secret to transform one element into another. Centuries later we still can't conjure gold from lead, sure, but what if it was possible to combine a handful of elements to very closely mimic gold? What if scientists engineered a synthetic Midas Touch that tricked base metals into performing like gold, thereby conquering the hurdles of rarity and price?

Now forget the alchemist's dream of gold and consider the equally precious noble metal platinum - hovering right around $50,000 per kilogram - which may be the key to building a sustainable energy future. Now, using advanced technology and elements that cost 1000 times less, researchers at Brookhaven National Lab have created a high-performing pauper's platinum from nanoscale building blocks.

Beyond the silver sheen of the metal, platinum sets the gold standard (forgive the pun) for catalytic performance, improving a reaction's efficiency while remaining largely unchanged. The electrolysis of water, or splitting H2O into oxygen (O2) and hydrogen (H2), requires external electricity and an efficient catalyst to break chemical bonds while shifting around protons and electrons. Once isolated, hydrogen gas offers one of the most promising renewable alternatives to dependence on a limited fossil fuel supply.

For a catalyst to facilitate an efficient reaction, it must combine high durability, high catalytic activity, and high surface area. Platinum knocks this out of the park, but its price discourages heavy investment from industry. The challenge, then, is to find what one Brookhaven chemist called a "Goldilocks" compound - the performance of platinum and the abundance of affordable non-noble metals. 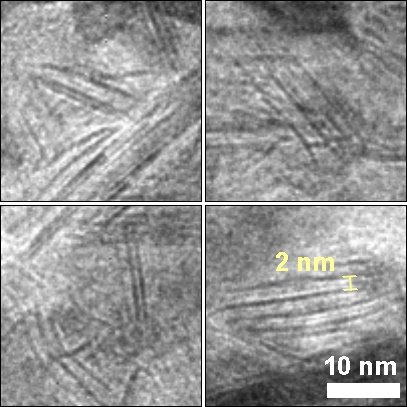 This magnified image from a transmission electron microscope reveals the nanosheet structure of the breakthrough electrocatalyst, seen here as dark, straight lines.

The Brookhaven team first combined nickel ($20 per kilogram) and molybdenum ($32 per kilogram), and then used high-temperature ammonia to infuse the compound with bolstering nitrogen. Then something unexpected happened.

The scientists expected discrete, sphere-like particles, but the resulting low-cost compound, NiMoN, took the surprising form of two-dimensional (atom-thin) nanosheets. The catalytic activity then exceeded expectations, in part because of that huge boost in surface area - just consider the difference between a bed sheet balled up and one laid out flat. Their results were published online this week in Angewandte Chemie International Edition.

This electrocatalyst does not address all of the barriers to developing a hydrogen-based energy economy. The electricity required to perform water-splitting remains high and, right now, impractically expensive. But overcoming the high price and limited supply of platinum makes hydrogen more attractive than ever as a renewable fuel source. It also marks a major victory for the almost alchemical transformations possible in nanoscience.

The problem with hydrogen remains the low energy density. This can only be overcome by compressing hydrogen to very high pressure, but the resulting tank would be much more dangerous than a full SCUBA bottle.

last night I got idea,
few weeks ago I watched some debate about spins of
electron, A was wrong because he claimed it is like
pair of glaves.
Then I was thinkin about model, my idea is that earth with
water in sinks has good potential to be adecvate model.
The thing is, the north pole side spins one way, and
south pole another way.
I just didnt figure out wath would be earth, and some impruvements could be done
Kkjajkjklda

Oh shoot, it's only a 1000:1 cheaper replacement for platinum. Well that's pretty good too, and not so likely to be shut down by the black helicopter bunch.
Ol' Bab

Very good for factories that use fuel cells for energy hungry processes.

This is very interesting.

It's a pity you don't have a donate button! I'd without a doubt donate to this brilliant blog! I suppose for now i'll settle for bookmarking and adding your RSS feed to my Google account. I look forward to fresh updates and will talk about this site with my Facebook group. Talk soon!