Muslim people in the Middle East are getting fed up with Islamic extremism. This is indicated by a new poll from the Pew Research Center. Nigerians, regardless of religion, dislike Boko Haram. Ninety-two percent of Lebanese are concerned about extremism in their country (that's the highest number in the poll) up from 81 percent last year. 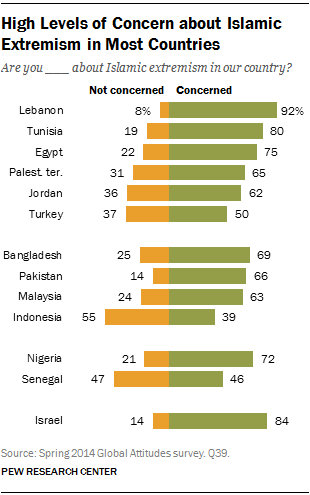 Majorities in most of the nations polled are concerned about extremism. And in most Middle Eastern countries, concern about extremism has increased in the past year.

In Lebanon, which shares a long border with conflict-ridden Syria, 92% of the public is worried about Islamic extremism, up 11 points from the already high figure of 81% in 2013. Lebanese Christians (95%), Shia Muslims (95%) and Sunni Muslims (86%) all share high levels of concern.
...

In the Palestinian territories, 65% worry about extremism, with much greater concern in the Gaza Strip (79%) than in the West Bank (57%).

You can see more of this poll here.

An NBC News/ Wall Streeet Journal/Annenberg poll indicates that a large number of Republicans and a very large number of Democrats, adding up to a majority of americans, are tired of Sarah Palin and wish she would stop.

The Middle East has been a war zone for the better part of 2000 years, and that trend will likely continue to be one for the foreseeable future in my estimation.

Re #1: Almost since the death of Muhammad there have been civil wars in the Islamic world. A number of these have been over which sect was the leading sect in Islam. then you also had issues between families leading to the overthrow of the Damascus empire by what became the Baghdad empire, which was overthrown by the Mongols.
Of course wars in the Middle east go back at least as far as the various invaders to the fertile crescent, (The nomads would take over a city, the nomads would be come civilized, rinse and repeat). Or consider Alexander versus the Persians. The Romans and the Persians had a long running war over what is now Iraq also, In fact this battle may be why the empire was to weak to keep the northern barbarians out.
Let alone talk about the wars between Israel at the time of Samson and the Philistines.

Well of course people tend to be leery of extremists. Almost by definition extremists are more focused upon and effective on issues nearer to home.

The difference between a moderate and an extremist is often a matter of distance away from the perceived threat. If a farm down the road has a barn of fire you pull on pants and boots and grab some gear and see if you can help. If your barn is on fire you just pull on boots and fight the fire as best you can in night clothes. If you roll up on a fire and see a guy in his PJs slinging water and another fully dressed you can figure who lives there and who is more emotionally attached to the idea of getting the fire out. Emotion is linked to distance.

Similarly extremist, religious or political, tend to focus more on issues closer at hand. Yes, religious terrorists have flown to foreign nations and done their worse. But for every attack on distant land there are many times that on opponents closer at hand.

Muslim extremists tend to kill more Muslims than non-believers, and more people on their native soil than foreign.

No matter how much the various extremist organization talk about carrying the fight to the distant enemy they always do more damage locally. Some of this has to do with logistics but a lot of it comes down to motivation and a lack of physical and emotional distance.

@Robby: Most every place has been a "war zone" for the last 2000 years, not the least Europe. And, there was plenty of warfare going on in the previous 2000 years. No reason to express inappropriate assumptions about any one region.

The economy polling numbers show that people judge the condidtion of the national economy almost solely based on their personal economic condition. Also, that they are quite likely unaware of the status of the usual economic indicators or even what they mean. This is certainly true on the right, where media do not report news that reflects positively on Obama and whose audience can't absorb facts that challenge their prejudices.

Sorry about the delay in freeing comments; our system was being upgraded.

I wholeheartedly reject the assertion that the middle east has been in a state of constant warfare for 2,000 years therefore [fill in whatever point you are trying to prove here].

I'm not sure I need to explain why, as it is pretty obvious.