UPDATE: There are significant changes (as of Friday mid day Middle America Time) in the track and strength of the storm, mostly good news for china. See here for updates.

A large typhoon (hurricane) is heading for China and is expected to make landfall in the vicinity of Shanghai. The image above is from the Japan Meteorological agency, and the image below is from JAM via Jeff Masters Blog. 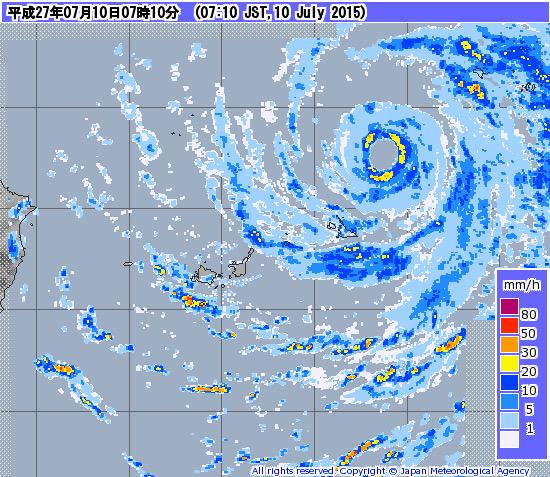 ... one of the strongest typhoons on record for a portion of the country unused to strong typhoons. Of particular concern is Chan-hom's storm surge, which has the potential to bring the highest water levels ever observed into Shanghai, China's most populous city, with 23 million people in the metro area.

This is all going to happen Saturday US time, in the wee hours of the morning, but PM locally. The storm, now a category 4, will likely be a category 2 at the time of landfall, which is still a problem.

The region has real tides, so a storm surge of several feet during low tide may be not such a big deal, while a storm surge on top of high tide could be devastating. In 1956 a storm came through with a nearly 6 foot storm surge but the normally 7+ foot tide was not high. In 1997, Winnie, a mere Category 1, struck near Shanghai. According to Jeff Masters,

the storm surge from Winnie was only 5.5" (14 cm) below the top of the 19.2-foot (5.86 meter) Suzhou Creek floodgate that protects downtown Shanghai on the Huangpu River, which flows through the center of town. This floodwall was rated to protect against a 1-in-200 year flood, and was overtopped by about one foot (30 cm) along a 8.5 mile (13.7 km) section inland from the downtown area, flooding over 400 homes

The tied, therefore, will make a huge difference, and it is probably too early to say much about the co-occurrence of high tide and Chan-hom's landfall.

Jeff has a LOT more on this storm and several related issues such as sea level rise in the area at his post.

Were there typhoons before SUVs?

OMG you are such a fucking moron. I'm done with you.

Were there idiots before neoliberal economics and fossil fuel emissions?

Looks like "see noevo" is taking advantage of the misery and pain which the people of Shanghai face, just to score a snarky point with a snide comment. And not even a good point. I would say "pathetic" but it doesn't really inspire pathos.

Here are a couple of interesting links:

Indeed, tide state at the time the surge hits will be the critical factor.. Here's the table:
http://tides.mobilegeographics.com/locations/5764.html

See Noevo's dumb comment harkens back to when Haiyan devastated part of the Philippines. I suggested, based on some very good information, which has since been confirmed, that Haiyan was a AGW enhanced cyclone. Andy Watts and his minions (such as See Noevo) got all bent out of shape with the possibility that people might notice that decades of slowing down action inre global warming has life and death consequences. Haiyan was an excellent test case for how denialists react when the shit (them) hits the fan (reality).

What is odd about this case is that my post says nothing about climate change in relation to this storm. It is notable that we are having a LOT of extra tropical storms, as expected under AGW. This is one of those many. But I made no comment about this storm's relation to climate change, because at the moment I have no opinion on that. I've always blogged about hurricanes, this is just one of those blogs. See Noevo was see-ing things.

See Noevo may not have eyes, but he sure does have a mouth that Speako Evo...

See Noevo is a tag troll. His sort pop in with a spray can of idiocy, spray something stupid on the wall and run away.

When you said you're done with him, Greg, I hope that means the ban hammer has fallen. He's a waste of even a few bytes.

A million folks evacuated, possibly many of them to be left homeless and, of course, there'll be more and worse to come because, more heat energy in the climate system and warmer oceans mean more and bigger storms.

lying in the most hateful and ridiculous ideologically motivated ways. Infuriating and depressing really.

Incidentally at a bit of tangeant, I just recently read the SF novel Mother of Storms'</i. by John Barnes :

which was based on pretty hard science and a pretty good read on a future scenario where the "methane clathrate gun" has been detonated (literally - in a rather improbable way) with extremely catastrophic circumstances. Not sure if anyone else has read it too? It won't be as bad as that novel anytime soon but it does make you think and will be, hell, already is more than bad enough and getting worse.

* Remember here that the ice age level of Co2 was 180 ppm so yeah, it makes a difference as the flippin' laws of physics say!