Suddenly, The Atlantic. And Delores.

But first a word bout Chan-Hom. That typhoon messed with China but not as badly as originally feared, because the storm turned to the east a bit. Now, Chan-Hom is heading for North Korea where it will come ashore as a wet tropical storm. I would not be surprised if more bad stuff happened there than with Chan-Hom's glancing blow over the last 24 hours or so.

Now I'd like to direct your attention the Atlantic Ocean for a moment. Due to vertical wind shear and aridification-induced North African dust, we have been expecting that one effect of climate change would be that most (but not all) Atlantic Hurricane seasons would be attenuated. Add in El Niño and you get more of that attenuation. On the other hand, with Weather Weirding also associated with climate change, may be we'll see more oddities than previously in the basin. This year, the Atlantic Hurricane season has been very anemic, maybe even more anemic than last year. 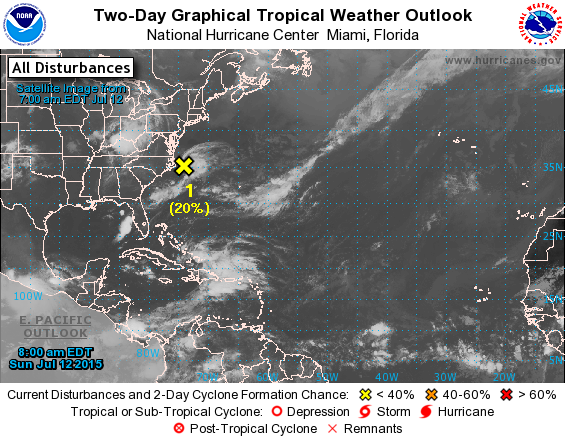 Disturbance Number 1 is way far from the area where hurricanes normally form, and is classified as a non-tropical system. It is not likely to do anything. But it is sufficiently active that it got a mention by the National Weather Service and they are watching it closely.

Yes, folks, that's all we've got in the Atlantic.

Meanwhile there have been many often quite active storms in the Pacific, including Chan-Hom of course, and now there is a named storm in the Eastern Pacific. It is Dolores (see image above). Delores is likely to turn into a hurricane some time tomorrow, and the storm will continue wet northwest out to sea, staying away from Mexico, through the work week. It is not going to become a very powerful hurricane (though all hurricanes are of course powerful) during that time. After that it all depends on how far north Delores drifts. The farther north, the more likely to weaken.

Meanwhile from the Weather Underground, we have this amazing graphic showing seven notable tropical energy blobs, including several named storms, some hurricanes.

This morning Wunderground page is up to eight, making a kind of necklace across those hot waters. Every overview I've seen of El Nino says it likely results in less active Atlantic.
http://www.wunderground.com/hurricane/

The exceptionally warm surface waters in the tropical Pacific, in combination with the activity of a strong phase of the Madden Julian Oscillation (MJO), has led to the formation of a remarkable simultaneous five tropical cyclones (tropical cyclones is a catch-all phrase to describe all tropical depressions, tropical storms, and hurricanes/typhoons.) On Saturday morning, the most dangerous of these appeared to be Category 2 Typhoon Nangka, which is expected to move northwards and affect Japan by Friday.