Hawaii Hurricanes: Madeline and Lester? Or Neither?

Lester is going to skim along to the north of the Hawaiian Islands. This is an estimate of the probability of the distribution of 50mph winds: 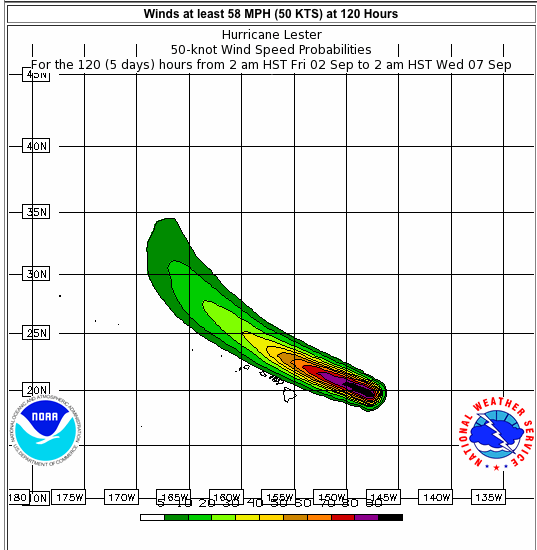 Surf's up, it will be stormy, but the significant threat is moderate.

Madeline sort of hit Hawaii, but it also did a funny little shrug as the medial to outer bands got close to the big island, and the rematerialized on the other side, keeping with the mysterious tradition (see below) of hurricanes magical avoiding the island state. But, the storm surge did in fact swamp a lot of places along the coast and it is a bit of a mess there.

Meanwhile, Hurricane Lester is still pointed roughly at the island, but likely to pass to the north, still affecting but not directly landing on Hawaii. But, these storm tracks can change, so stay tuned.

Hawaii is tiny. And huge. Look: 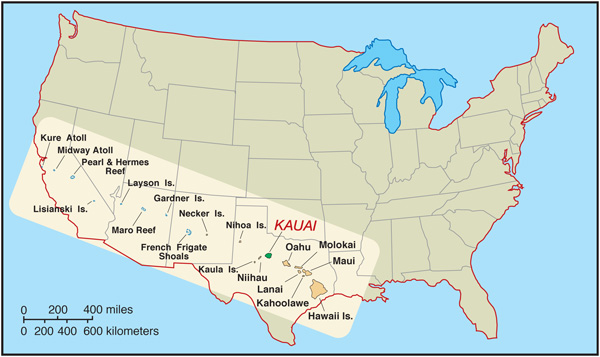 Hawaii is larger in land area than Rhode Island, Delaware, or Connecticut, but smaller than all the other states. The big island is a bit larger in land area than all the other islands put together. Yes, the entirety of Hawaii covers a huge area of the Pacific. The longest linear dimension of the state of Hawaii is longer than the longest linear dimension of any US state, and of most countries. This is a property of many Pacific polities, including most Pacific island nations.

Yet, even though Hawaii, located in the Pacific tropics, should be a virtual catcher's mitt for cyclones (hurricanes), the big island has hardly ever been hit directly by anything. Hawaii as a state is often affected by tropical storms, but usually in the form of surf (and Hawaii is where they invented surfing, so that is mostly a good thing). Is this simply because Hawaii is big (east-west wise) yet small (north-south wise) and thus is simply very lucky?

Or, is Hawaii located in an area that major tropical cyclones tend to go around, or at least, not through. Like this:

Hawaii's apparent immunity to most hurricanes

The islands of Hawaii, with Kauai as the notable exception, appear to be remarkably immune from direct hurricane hits. The USGS states that "more commonly, near-misses that generate large swell and moderately high winds causing varying degrees of damage are the hallmark of hurricanes passing close to the islands."[31] This has also drawn media attention.[32][33] One notion is that Hawaii’s volcanic peaks slow down or divert storms.[34] A partial source of this idea may be the long list of hurricanes ... that dissipated into tropical storms or depressions upon approaching the islands. Satellite images of Hurricane Flossie's breakup when approaching Hawaii Island fueled this idea.[35] Another example may be Hurricane Felicia which dropped from Category 4 down to a tropical depression with residual winds predicted at only 35 miles per hour (56 km/h).[36]

Tropical Storm Flossie (not to be confused with Hurricane Flossie in 2007) provides still another example. On July 28, 2013, the storm appeared headed for a direct hit to the Big Island, home to Mauna Kea and Mauna Loa. Both mountains rise to elevations in excess of 13,000 feet above sea level, and as Flossie approached the island, its track shifted abruptly overnight and assumed a more northerly alignment, heading instead to the island of Maui on July 29.[37]

Wind data in particular supports the USGS assertion that hurricane damage has been low on all islands except for Kauai. Data collected by the Western Regional Climate Center show no hurricane-strength winds on any Hawaii Islands with the exception of Kauai.[38] Despite this data, FEMA classified all of Hawaii as being in a "Wind-Borne Debris Region".[39][40][41]

At present, Hawaii, in particular the big island, is threatened with a tropical cyclone, likely to be a full on hurricane. Will it hit? Will it magically turn away from the island state?

Hurricane Madeline is weakening but at the same time heading for the big island, and should start affecting the island over the next day or two. This chart from Weather Underground lays out the expected timing:

But wait, there's more. Hurricane Lester is also in the area and is heading for Hawaii as well. This would happen some time over the labor day weekend. Lester has less of a chance of being a full blown Hurricane when hitting Hawaii than Madeline, but it is way to early to be certain of much.

As of Thursday afternoon Hawaii time, a hurricane watch is in effect for Hawaii and Maui Counties (the latter includes Molokai, Lanai, and Kahoolawe islands as well as Maui). The good news is that Lester is expected to pass to the north, putting the islands on the left (weaker) side, but the cone of uncertainty still includes some land.