Day 3 of the Experimental Biology meeting was arguably one of the most exciting for comparative physiology. Here are the highlights from Monday:

Morning Seminars:
Birgitte McDonald from Aarhus University, Denmark presented, "Deep-diving sea lions exhibit extreme bradycardia in long-duration dives." Birgitte and Dr. Paul Ponganis measured the heart rate of California sea lions (Z. californianus) using digital electrocardiogram loggers and found that the heart rate was reduced (bradycardia) during dives along with reduced blood flow to the lungs and periphery. This helps preserve the oxygen content in the lungs and encourage muscles to use stored oxygen while conserving oxygen in the blood.
Birgitte was also awarded an APS International Early Career Physiologist Travel Award to attend the meeting.

Matthew Pamenter (U. British Columbia) presented work that he conducted with Yvonne Dzal and William Milsom entitled, "Profound metabolic depression in the hypoxia-tolerant naked mole rat." What I found most interesting about this talk is that naked mole rats are the most hypoxia (low oxygen) tolerant mammal known. These animals are able to maintain normal activity levels even in oxygen conditions as low as 3% (normal oxygen concentrations of the air we breathe at sea level are ~21%). This amazing adaptability is attributed to their ability to lower their metabolism.

Laura Niiranen (Univ. Oulu, Finland) presented her work on "Metabolic signatures in overwintering raccoon dogs (N. procyonoides)." These animals (shown below) are apparently the only member of the canidae family that can remain inactive. Similar to other animals that are inactive during the winter, they built up fat reserves to survive this fasting period.  The receptor for the hormone leptin, which regulates satiety, is downregulated during this fattening period to encourage the animals to increase food intake.

Image of a raccoon dog from: UMich Animal Diversity

Highlights from the afternoon session on "Comparative Physiology of Aging and Senescence"  included:

An introductory seminar from Dr. Daniel Promislow (Univ. Washington) who gave a talk titled, "A comparative systems biology perspective on aging." He spoke about whether or not aging pathways are public (common to all species) or private (differ between species/genomic basis), which I found to be an interesting way of describing it. He also talked about whether biomarkers of aging could be identified.

Dr. Vera Gorbunova's talk on "Comparative biology of aging and cancer: from mice to naked mole rats" followed his talk. Did you know that naked mole rats (shown below) can like up to 32 years. In addition, they are resistant to the development of cancer! 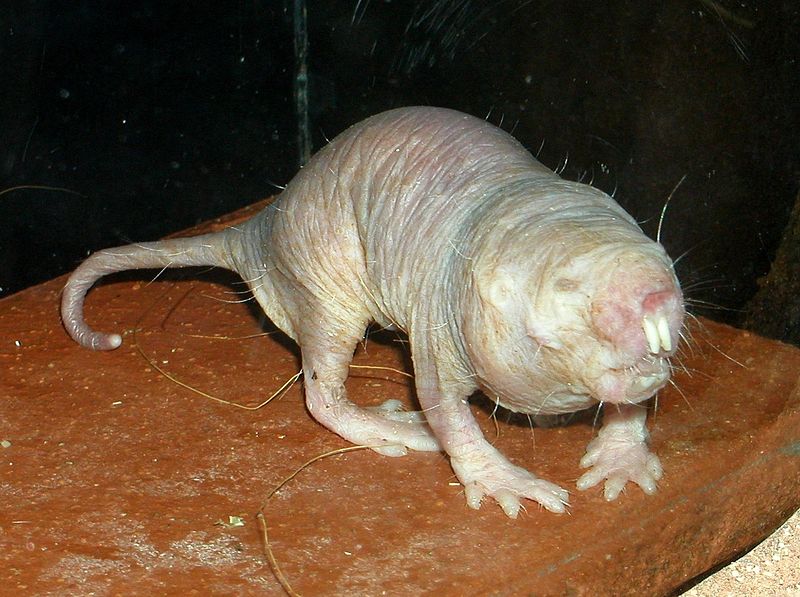 Image of a naked mole rat from Wikipedia (http://animaldiversity.ummz.umich.edu/accounts/Nyctereutes_procyonoides/)

Karen Sweazea (Arizona State Univ.) spoke about research in her laboratory on "Oxidative stress impairs vasodilation of ex vivo arteries from mourning doves (Z. macroura). What I found was interesting about this talk is that birds have very high blood sugar, but like a mammal, when blood vessels are exposed to even higher sugar concentrations, reactivity is impaired. In mammals, this response to high blood sugar leads to high blood pressure and cardiovascular disease as seen in diabetes.

Karl Rodriguez (Univ. Texas Health Sci. Center, San Antonio) spoke about his research on "High levels of the small chaperone HSP25 in naked mole-rats may be a determinant of rodent longevity." What was so interesting about this seminar is that Dr. Rodriguez discovered that levels of HSP25, a molecular chaperone protein responsible for helping to keep proteins properly folded, was really high in tissues from naked mole rats in comparison to shorter lived species. He suspects that HSP25 may therefore be a biomarker of longevity.

The other seminar that I found interesting was given by Dr. Stephen Roberts (Central Michigan Univ.) who spoke about "Effects of age and lifetime flight behavior on senescence and reproduction in Drosophila." He discovered that flight actually accelerates aging. Considering that others have found that flying animals (birds and bats) live long lives, these findings were really interesting in flies.