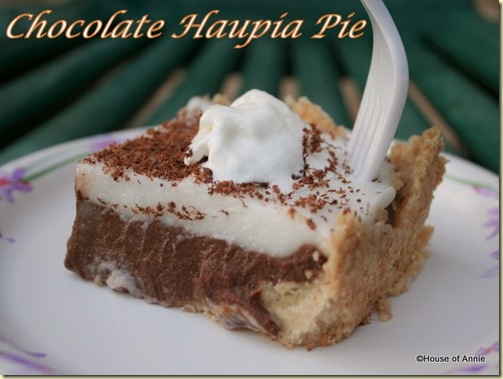 Nathan Lau's Chocolate Haupia Pie
This entry for the Scienceblogs Pi Day Pie Contest was sent to us by reader Nathan Lau of the House of Annie food blog.  It is a chocolate haupia pie, which Nathan describes as a "Hawaiian-style coconut milk-based pudding".  He has the full recipe and step-by-step instructions and pictures on his website and it looks absolutely delicious!
We're hoping to take a final crack at making a pie of our own later this afternoon, and I'll update this post with some pictures if we get it done before the end of the day.  To see all of the current pie contest entries or to submit one of your own, click here.

UPDATE: We made our raspberry pie!  Details after the jump.

My girlfriend Daun and I were able to make our favourite raspberry pie tonight!  We attempted a lemon tofu "cheesecake" earlier this week (at left).  The crust was made of walnuts, and the filling was made of lemon juice and silken tofu, with a lemon juice and agar glaze. It was our first attempt at a tofu cheesecake, and to be honest it turned out pretty well!  It didn't taste exactly like a cheesecake, but it did taste very good, and because of all the tofu, it was incredibly filling.  But it didn't look so hot (the crust was a little well done), so we decided to try to make another pie for Pi Day.

That brings us to today,

when we made our old standby - a raspberry pie.  My girlfriend is vegetarian, so we used agar (which comes from seaweed) instead of gelatin to hold the pie together.  We had never used agar before we started making this pie, and have been very impressed with it every time!  To make the filling, we dissolved agar flakes in a pot of boiling apple juice (picture at right).  Like any good Canadians, we then sweetened the filling with maple syrup, then thickened it by stirring in arrowroot.

Once the filling had thickened, we added 4 cups of frozen raspberries and poured the whole mixture into a freshly basked crust, which consisted of blended almonds and oatmeal, held together with maple syrup and canola oil.  Then the whole thing was popped into the fridge, and will be ready to eat by tomorrow morning.  Here's what the final product looked like.

I should mention that Daun did the heavy lifting on both of these pies, although I did clean the dishes, and offered moral support throughout.  We discovered both of these pies at The Green Door, which is our favourite vegetarian restaurant here in Ottawa.  They have a fantastic cookbook, which I can't say enough good things about, and which includes the recipes for both of these pies.

If coming back for seconds is indulgent, then this eighth helping of Pi Day Pies makes us pure hedonists. But hey, the dessert table is the new water cooler. First, Travis Saunders and his girlfriend cobbled together their own entry on Obesity Panacea, a vegetarian Raspberry Pie that uses agar…

Either we set our oven temperature too high or the competition is heating up here in the 2010 Pi Day Pie Bake-Off. Yesterday we posted Annie Wang's Archi-meaty pie, Leigh's Rabbiteye Blueberry Pie, and Stephanie's "Grown-Up" S'mores Pie with Guinness, and ScienceBloggers James Hrynyshyn and Pamela…

Here are my entries to the ScienceBlogs Pi Day Bake-off: End-of-winter fruit pie Apples and amaretto-soaked dried fruit in a nut crust. Dense and rich. 'I want to taste springtime!' violet custard pie Delicate, creamy, and a little bit fantastic (seeing as how it requires harvesting petals from…

Thanks for the mention!