In yesterday's crude astrophotography post, I mentioned that the conjunction of Venus and the Moon would be closer this morning, but I took a shot of it yesterday because there's no telling with the weather here this time of year. When I first went outside this morning, though, the sky was beautiful and clear and I said "Wow, that'll be a great shot after all."

Then I went inside to eat breakfast, and when I came back out, clouds had rolled in.

There were occasional breaks, though, and I did manage to get a fortuitous alignment of two of those with the bodies in question. which let me make the following composite from consecutive days: 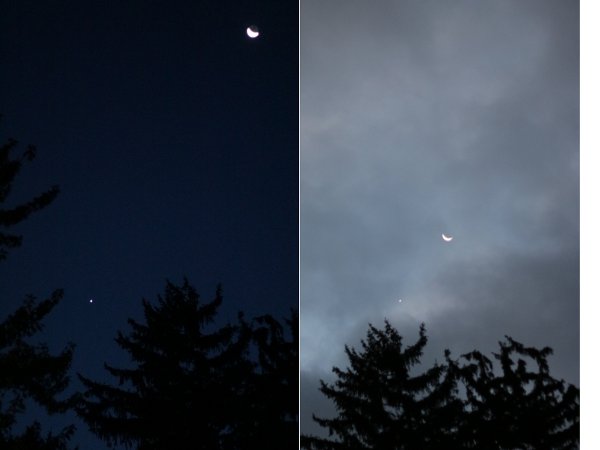 Shots of the Moon and Venus from yesterday (left) and today (right).

These are cropped so the vertical scale is the same for both, and Venus is on the 1/3rd line up from the bottom. Today's shot wasn't quite framed the same as yesterday's, though, thus the white space on the right, which would've been filled if I could get a full 4x6 crop at that scale.

Here's a closer crop of today's shot with the usual 4x6 aspect ratio: 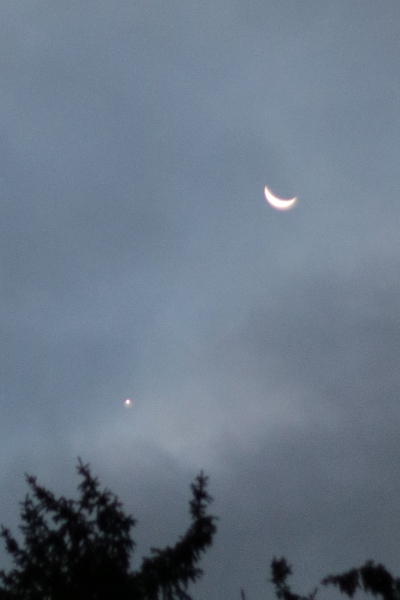 Venus and the crescent Moon through clouds.

That composite of the two gives a nice sense of how things move in the sky, and I have other stuff I need to work on today, so we'll call it the photo of the day, and move along.