It's been a couple of years since we lost the Queen of Niskayuna, and we've held off getting a dog until now because we were planning a big home renovation-- adding on to the mud room, creating a new bedroom on the second floor, and gutting and replacing the kitchen. This was quite the undertaking, and we would not have wanted to put a dog through that. It was bad enough putting us through that...

Withe the renovation complete, we started looking for a dog a month or so back, and eventually ended up working with a local rescue group with the brilliantly unsubtle name Help Orphan Puppies. This weekend, we officially adopted this cutie: 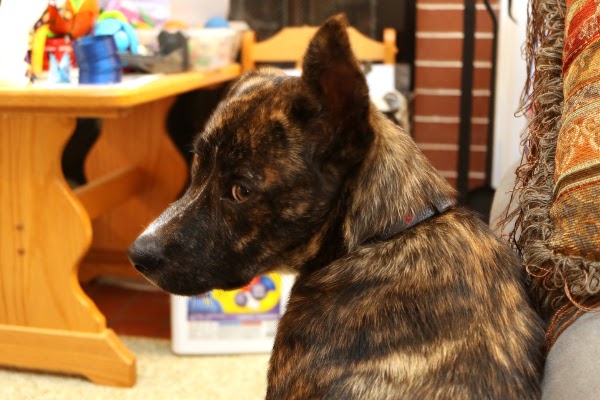 Charlie, the new pupper at Chateau Steelypips, showing off his one pointy ear.

He was listed on the website as "Prince," but his foster family had been calling him "Charlie," and the kids liked that name a lot, so we're keeping it. He's a Plott Hound mix (the "mix" being evident in the one ear that sticks up while the other flops down), one of six puppies found with his mother back in May in a ravine in I think they said South Carolina. He's the last of the litter to find a permanent home. The name change is appropriate, as Emmy was listed as "Princess" before we adopted her and changed her name.

Charlie's a sweet and energetic boy, who's basically housebroken, and sorta-kinda crate trained, which is about the same as Emmy when we got her. He knows how to sit, and is learning other commands. He's very sweet with people, and we haven't really met any other dogs yet, but he was fostered in a home with two other dogs, so we hope he'll do well. And he's super good at jumping-- he cleared a 28" child safety gate we were attempting to use to keep him in the mud room-- and does a zoom with the best of them: 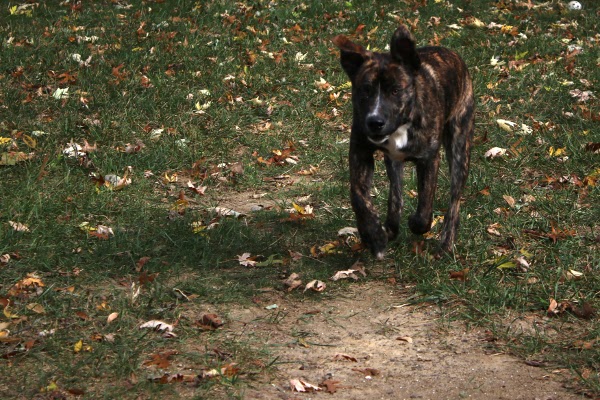 Charlie does a zoom.

The kids are absolutely over the moon about having a dog again, as you can see from their paparazzi turn: 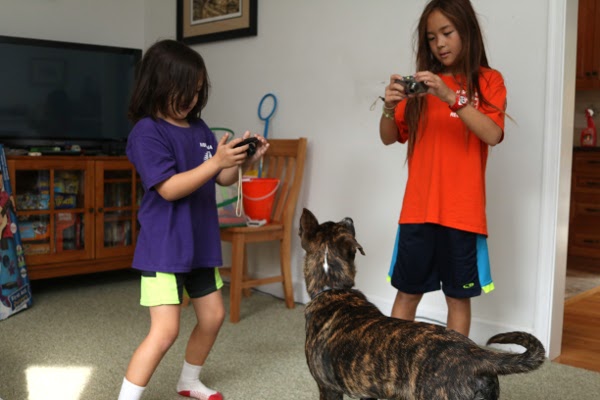 Charlie poses for the paparazzi.

He's a very good boy, all in all, and we're very pleased to have him. I can't really describe how good it felt on Saturday afternoon to once again settle down on the couch with a football game on tv, and drop my hand down to pet a dog lying on the floor next to me. I still miss some things about Emmy, but Charlie's already filling a huge void.

SteelyKid's second-grade teacher sent home a couple of books about kids dealing with the loss of beloved pets-- one of which, The Tenth Good Thing About Barney is surprisingly atheistic. We read them at bedtime the other night, which was a little rough. After we finished, and moved her to her bed (…

Another day, another DonorsChoose incentive claimed. I'm actually late in responding to this one-- I missed my self-imposed 24-hour deadline because we're visiting Kate's parents outside of Boston, but I'll try to make up for it with the answer. Anyway, Helen asks: How did Emmy become part of your…

The big development of this week is that construction started on the Great Chateau Steelypips Renovation of 2017. We're extending one part of the back of the house about ten feet to gain a bedroom on the second floor, and gut-renovating the kitchen, dining room, and mud room. This is a massive…

Emmy, Queen of Niskayuna, is not what you'd call a well-socialized dog. We got her from a shelter, where she was an owner turn-in due to allergy problems, so the only time she's been around other digs was in the shelter. I think the technical term for her reaction when confronted with another dog…
Advertisment