As promised in the last catch-up post, a set of pictures less devoted to cute-kid shots.

The superhero-themed "zones" of our house, as defined by the Pip.

The Pip has been making one of his preschool teachers draw superheroes for him. At some point, he cut these out with scissors (or possibly made Kate cut them out), and hung them up in different rooms. So the living room is now the Captain America Zone, the kitchen is the Flash Zone, and the library is the Spider-Man Zone. I'm not sure what exactly that means, but it's a thing. 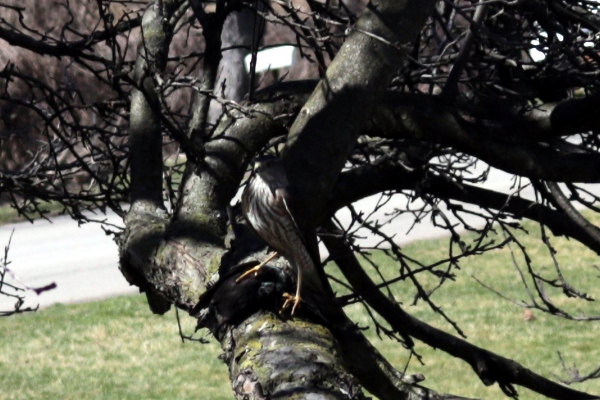 A hawk with the grackle it killed in my parents' yard.

This raptor was in the side yard at my parents' house during our Easter visit. It's not the greatest picture, because I had the 24mm lens on so at to be able to get good wide shots of the kids, so this is cropped down from a much larger image. I think this is a Cooper's Hawk, because the head and beak looked a little more blue than the Sharp-Shinned Hawk pictures in the bird books I looked at, but I could be wrong. 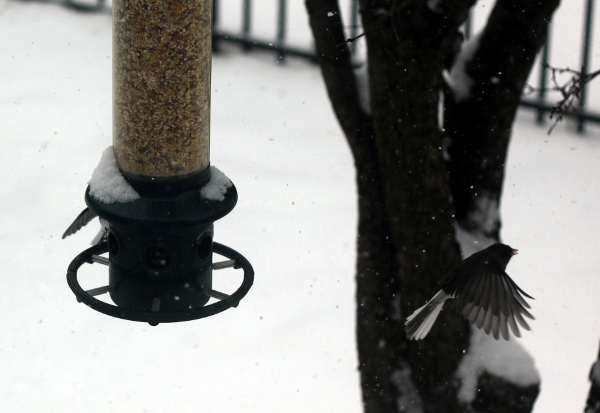 Birds at the feeder in the snow.

One of the notable events of the stretch where I was bad about photo posting was the most significant snowfall we got this winter. Which of course happened in April. Anyway, these birds were not amused. 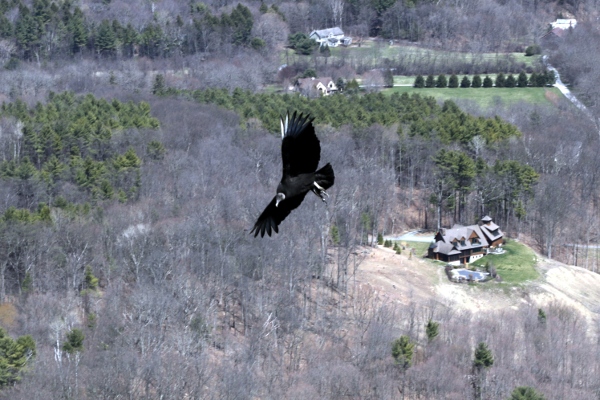 Speaking of birds, we took the kids up to Thacher Park, where the kids were super excited to be on the edge of a high cliff. The Pip insisted on skipping and dancing all over, which wasn't nerve-wracking at all, nope, no way. While we were on the clifftop, there was a flock of eight or so turkey vultures soaring and swooping just off the edge, and I got some really good pictures despite only having the 24mm and 50mm lenses with me. 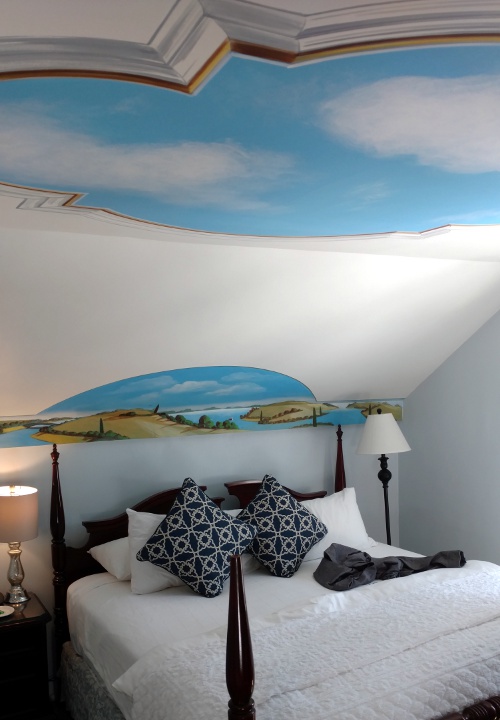 My room at the Col. Blackinton Inn near Wheaton College.

A big part of my lack of posting has been travel-related. In this stretch, I made a run down to give a talk at Wheaton College south of Boston (not the one with the big ugly controversy over the firing of a professor who said nice things about Muslims). They put me up at the Col. Blackinton Inn, which had nice paintings on the walls and ceiling. 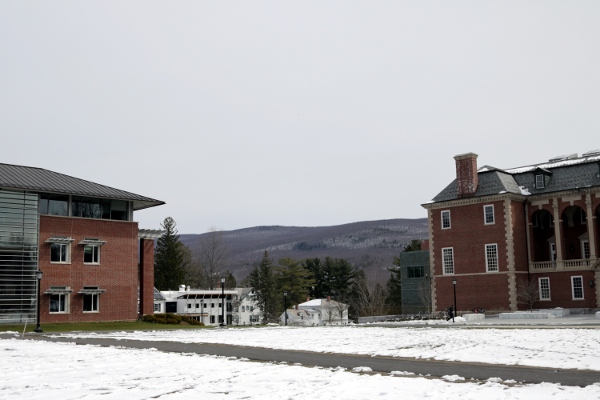 View from the empty field where Sawyer Library used to be.

On the way back from Wheaton, I got on the road early and made a detour over the Mohawk Trail to stop in Williamstown for lunch. Where I went and admired the empty field where the main library stood when I was a student-- turns out, there's a nice view from that spot, which I never knew because there was a giant ugly brick cube there. 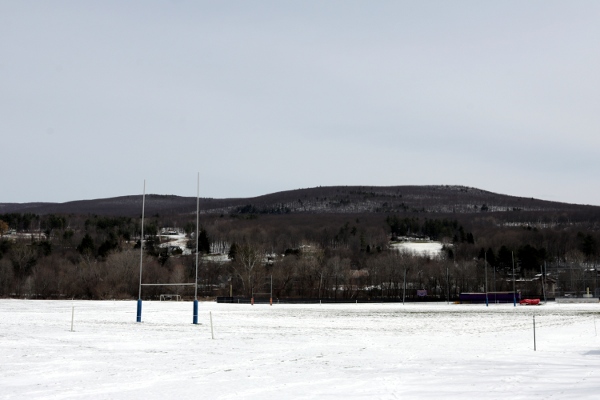 The rugby pitch on Cole Field. 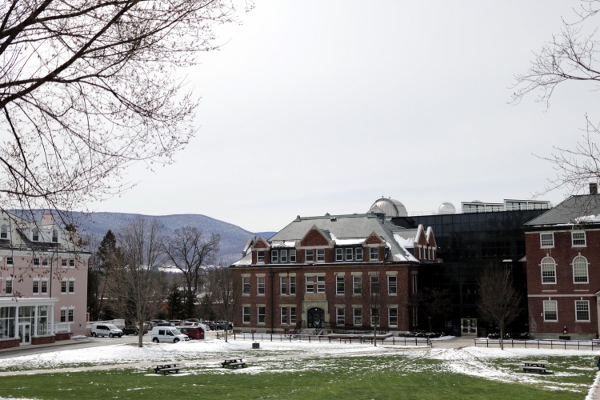 The Science Quad at Williams, looking at the Physics building.

As I tend to do, I swung through the Science Quad and visited a bit with the physics faculty. 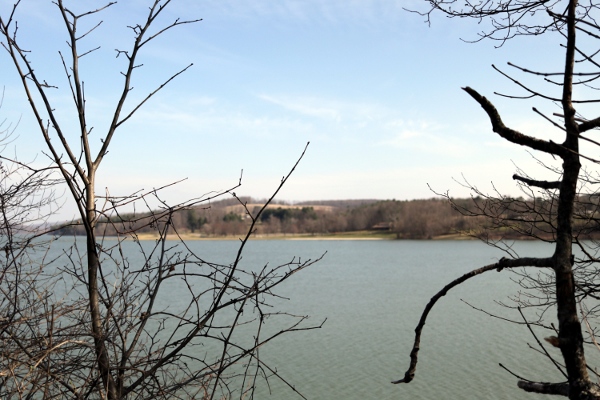 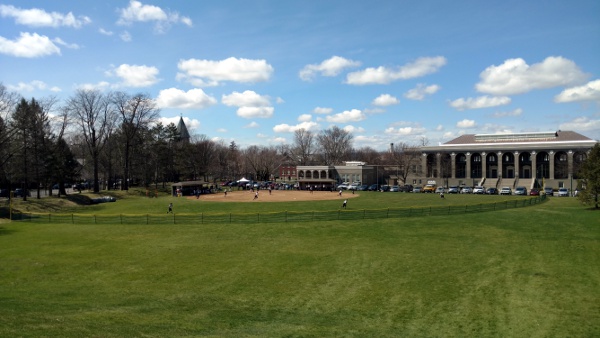 A softball game at Union.

As noted in the previous post, SteelyKid is going to be playing rec softball this spring, and is pretty fired up. Accordingly, we went over to watch a game at Union, because it really, truly is Spring, and we do sometimes get nice weather. 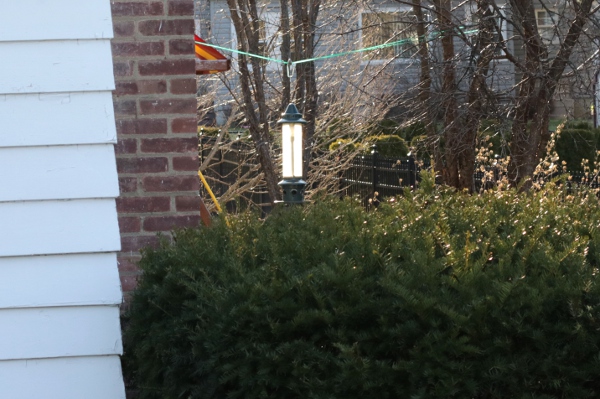 The empty bird feeder at Chateau Steelypips glowing in the morning light.

One of the things I struggle with, photo-wise, is trying to capture cool light effects like the early-morning sun when we're getting the kids off to school. This one worked better than most of my attempts, as the sunlight coming around the house makes the empty bird feeder look almost like a lamp. 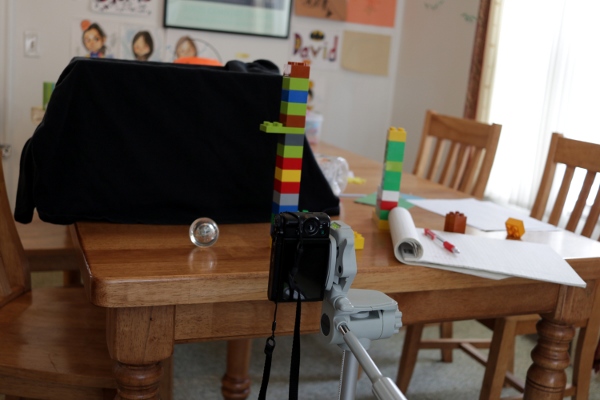 Set-up for an experiment that didn't work.

At one point in this stretch, I was working on an experiment for a blog post that didn't really pan out. Here's the set-up for the video I was trying to make, before I had a problem with the camera that scuttled the whole thing. 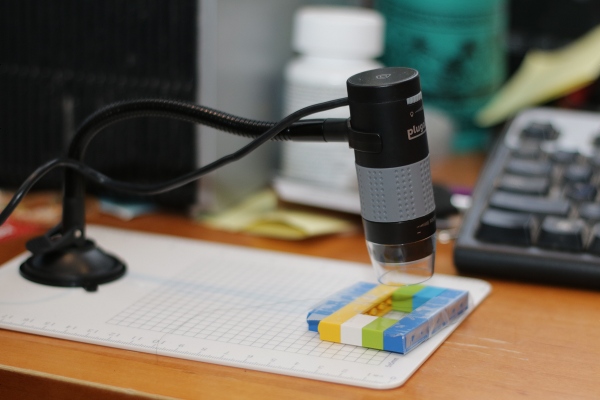 SteelyKid's digital microscope looking at hair on a Lego frame.

Here's the set-up from an experiment that really did lead to a blog post. 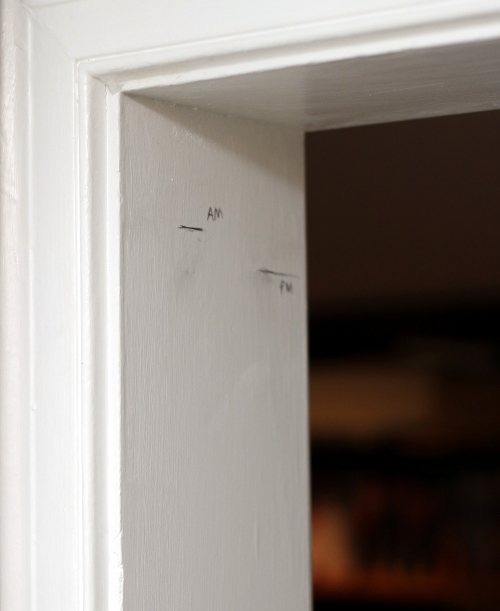 My height at different times of day. 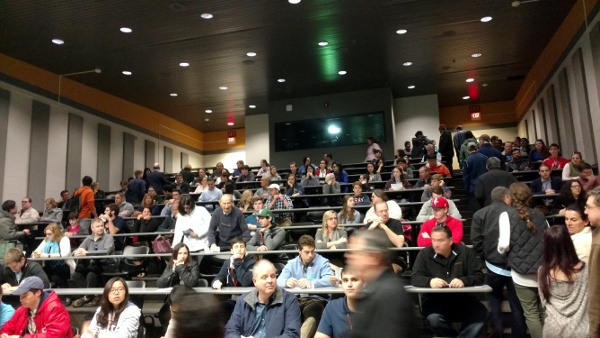 The audience the fake class I did for prospective students.

Yet another of the many things I had to do during this stretch: The nice folks in Admissions asked if I would give a half-hour "mock class" for a Saturday program they were doing for accepted students. So I put together a short bit on the "ultraviolet catastrophe" and how Planck's quantum hypothesis avoids that problem. This is a cell-phone snap of the audience filing in-- there were even more people than this by the end, probably pushing the limits of the fire code. It was a fun time. 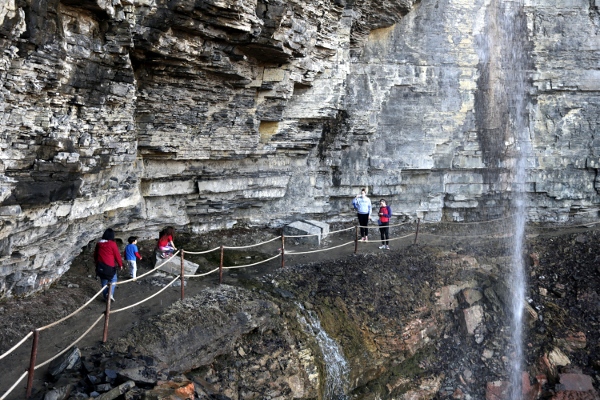 One of the waterfalls at John Boyd Thacher State Park.

Finally, here's the "featured image" from up at the top of the post, showing one of the seasonal waterfalls at Thacher Park. This is, I think, the only actual appearance of the kids in this set of photos-- you can see the on the left side, where SteelyKid is climbing a rock. This is the Indian Ladder Trail, which goes down the cliff face, under a couple of waterfalls, and back up on the other side. The kids were super fired up for this, and watching The Pip do the Monty Python knight gallop along a narrow path above a steep drop only took a couple of years off our lives. Fortunately, the three times he tripped over rocks and faceplanted all took place in the park at the top...

And that brings us just about up to the present.