One of the things parents of multiple kids often talk about is how they don't end up doing the same things with second children that they did with their first. For example, I carried the weekly Appa-for-scale photos on with SteelyKid for a couple of years, but didn't last anywhere near that long with The Pip. Another thing I did with SteelyKid was to report fairly regularly here on cute stories she told me, and that kind of thing, which I've largely been failing to do with The Pip. the fact that I've fallen out of doing any kind of kid-blogging at all doesn't really make this any better...

But the absence of cute-schoolwork stories doesn't mean there hasn't bee cute schoolwork from our Little Dude. He's considerably younger compared to his classmates than SteelyKid was when she entered kindergarten (his birthday is in November, and kids need to be 5 by December 1 in order to start kindergarten), but he's working really hard, and has come a long, long way this year. Here's an excerpt from his April writing journal, on Earth Day: 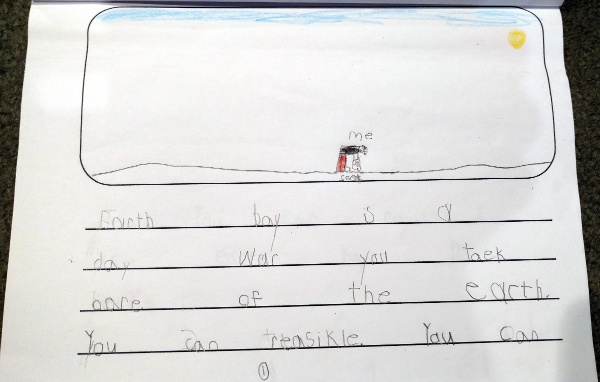 The Pip on Earth Day.

(Transcribed literally, save for fixing a couple of letters, including the continuation on the next page:)

Earth day is a day war you taek care of the earth. You can reasikle. You can reidus. You can reyus. I like earth day. Do you?

(With spelling corrected, that's "Earth Day is a day where you take care of the Earth. You can recycle. You can reduce. You can reuse. I like Earth Day. Do You?")

He's also gotten really good at reading, thanks in part to his obsessive study of Pokemon cards.

His big sister also continues to have a fertile imagination; I particularly liked the story that she wrote to go with this cute-animal coloring page (which is on the back; the photo is a composite): 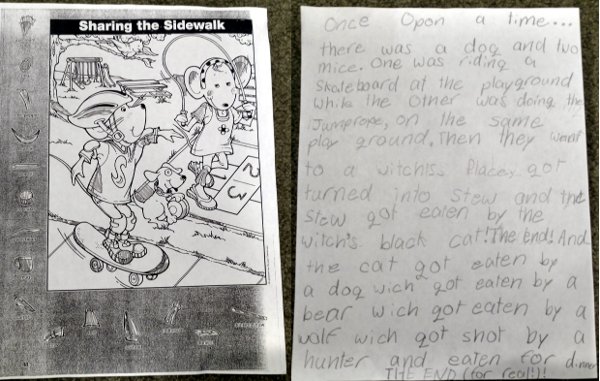 Coloring page and SteelyKid's story that accompanies it.

The story (3rd-grade spelling transcribed as is):

Once Opon a time... there was a dog and two mice. One was riding a skateboard at the playground while the other was doing the jumprope, on the same play ground. Then they went to a witch's place, got turned into stew, and the stew got eaten by the witch's black cat! the end! And... the cat got eaten by a dog wich got eaten by a bear wich got eaten by a wolf wich got shot by a hunter and eaten for dinner.

"Wow, honey, that got a little dark," I remarked. "Oh, everybody in the class got dark like that..." she replied airily. I'm not sure what to make of that...

Anyway, there's your cute-kid update. I'm going to try to carve out a little time for more regular kid updates, probably on weekend mornings, because it'll probably be a good exercise mental-health-wise.

And, for those reading by RSS, here's the "featured image" from up top, a composite of our "cautious daredevils" (a self-description from a hike we took at the Christman Sanctuary down in Duanesburg) on the climber at the middle school playground in Whitney Point, when we were at my parents' over Easter. These are cell-phone pictures because like an idiot I forgot my good camera, but I like having the climber as a standard reference object so you can judge their relative sizes. 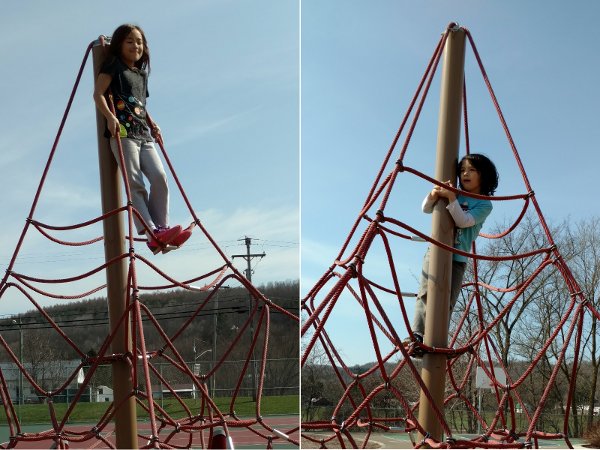