Weekend Diversion: The Best Falling Stars of the Year

"Stuff that's hidden and murky and ambiguous is scary because you don't know what it does." -Jerry Garcia

Earlier this month, one of my favorite musical artist of all-time would have turned seventy. This weekend, I'm off at a fantastic music festival where they're celebrating the life of Jerry Garcia, and in addition to being the leader of the Grateful Dead, he was also a huge influence in the world of bluegrass, americana and folk music. While I always loved his songs about lovable scoundrels, here's a duet of him with David Grisman performing the much more pastoral

and there's maybe no better song to listen to while we talk about the best meteor shower of the year -- peaking tonight -- the Perseids! 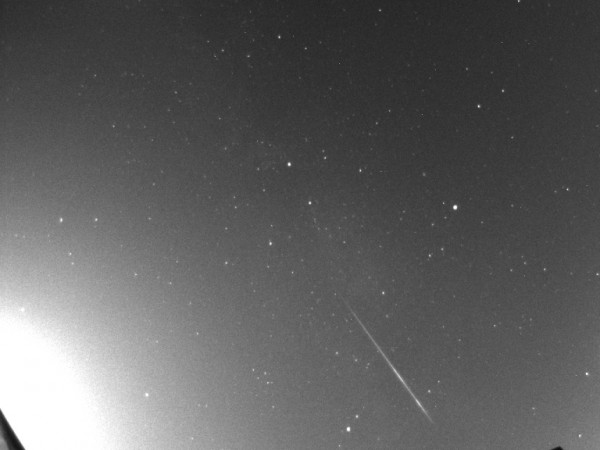 While the first Perseid meteors started showing up back on August 4th, the Perseids will peak tonight, and anyone with clear skies, even in cities, should be able to enjoy them. 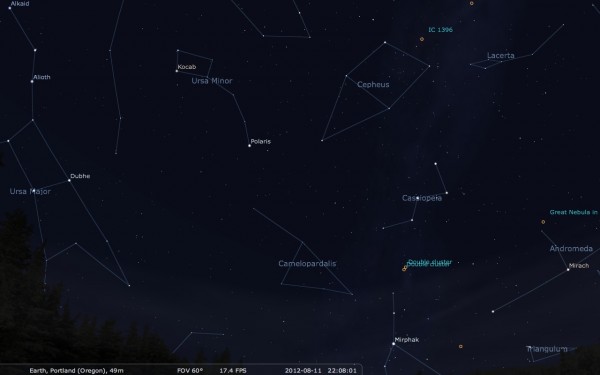 Almost everyone in the Northern Hemisphere can recognize the Big Dipper (at left on this image), the North Star (Polaris), and Cassiopeia (the big W towards the right), all of which are visible in the north throughout the night.

Just beneath the first V in Cassiopeia's W is the famous Double Cluster in Perseus, one of the most spectacular collections of hot, young stars in the nearby Universe. 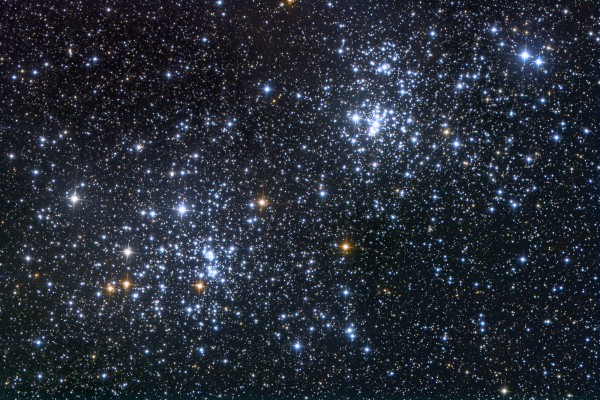 Although it's visible to the naked eye under very dark skies, it's most spectacular through telescopes or very good binoculars. But it isn't the Double Cluster itself that's important tonight; it's the location of this area of our night sky. 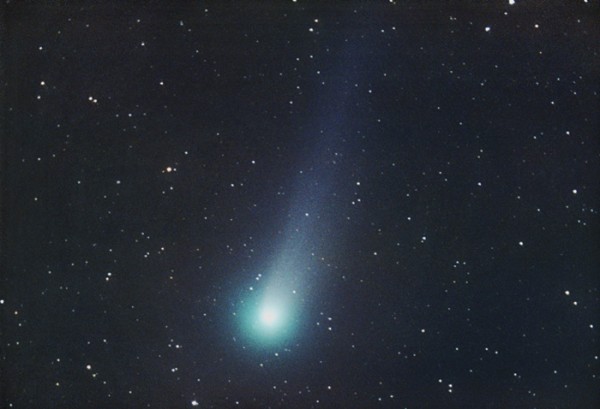 Every 133 years, Comet Swift-Tuttle passes through our inner Solar System, coming just inside of Earth's orbit. It's been doing this since at least 69 BC, and passed through most recently in 1992. 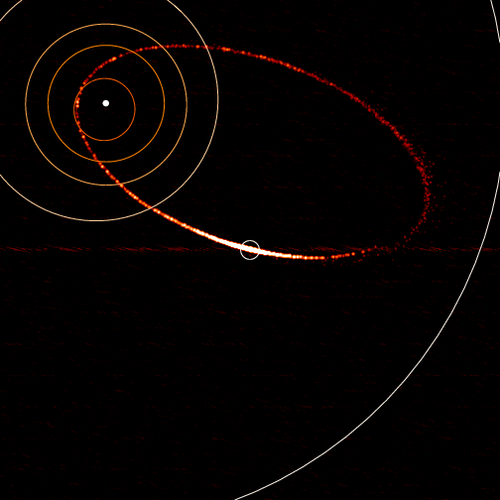 Like all comets, Swift-Tuttle leaves a debris trail through the Solar System throughout the path of its orbit. When the Earth passes through this comet trail, the particles of cometary dust strike our atmosphere at somewhere between 20-25 kilometers per second, creating what we see on Earth as a meteor (or a shooting star). 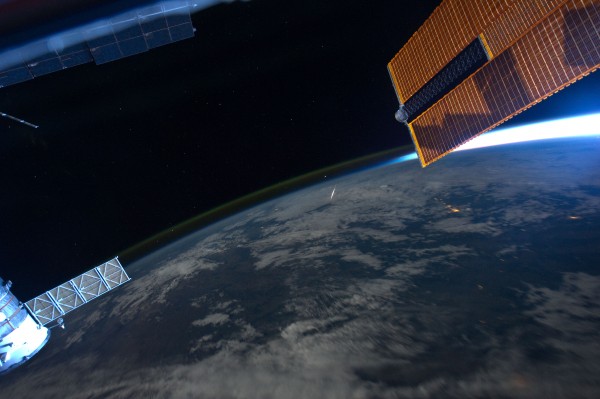 That's where this meteor shower comes from, so where and when should you look to see it?

Well, let's go back to Cassiopeia to see where all of these meteors appear to come from. 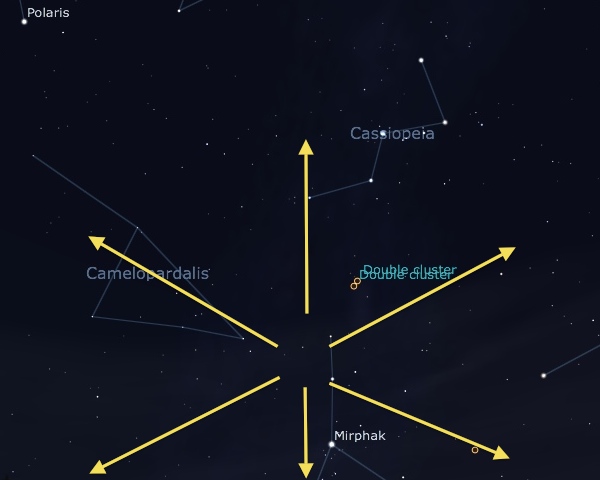 Image credit: me, created with Stellarium and some basic image editing.

Although Cassiopeia should be low on the horizon in the early part of the night (around 10 PM), rising higher throughout the night, you're in luck for two reasons.

First, the Moon is only about 1/3 full and waning, meaning that it won't even appear in the sky until after midnight. As the greatest source of light pollution, your best bet is to watch for meteors before the Moon rises. But second is that the Perseid meteors are fast, so that the entire sky is up-for-grabs when it comes to where you're going to see one! Even though Cassiopeia will be higher in the sky as the night goes on, the Perseid meteors are so fast-moving that they tend to streak over large areas of the sky, although I'd still look (roughly) towards the North.

In fact, this composite image of a whopping 253 meteors from the 2007 Perseid shower illustrates just how far the Perseids can extend. 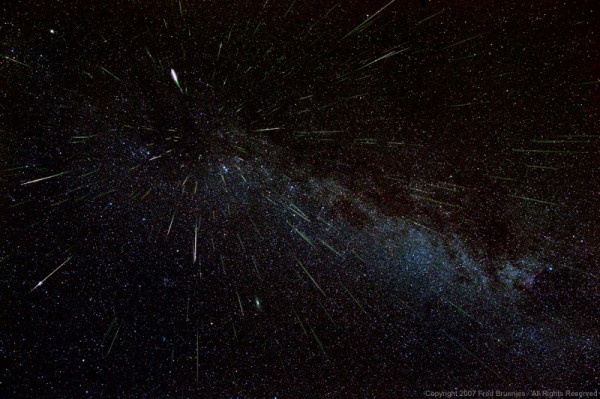 The best time for observing is as late as possible before the Moon rises high, so between about 11 PM and 1 AM tonight. The peak  rate of meteors is estimated to be about one meteor per minute, so simply look towards the North (not directly at the radiant, as the meteors will all be moving away from that point), and enjoy it!

For those of you with either cloudy skies or in an inopportune location to watch, check out the NASA live stream (with picture resources) of the 2012 Perseids, and whatever you're doing, enjoy your weekend and enjoy the skies tonight!

What is a meteor shower, anyway?

"That's why I enjoy taking myself out of my own element, my own comfort zone, and hurling myself out into the unknown. Because it's during those scary moments, those unsure steps taken, that I am able to see that I'm like a comet hitting a new atmosphere: suddenly I illuminate magnificently and…

“Honestly, if you’re given the choice between Armageddon or tea, you don’t say ‘what kind of tea?” -Neil Gaiman Enjoying the Perseid meteor shower this year, as perhaps you do every August? As you look up, the great cosmic show might have a lot more to offer than mere streaks of light, due to…

Get Up Early This Wednesday!

There's a good reason for it, I promise! Allow me to explain. You see, every so often, a comet zooms in from the Kuiper Belt. As it approaches the Sun, it heats up, displaying a spectacular tail. What is this "tail" actually? It's tiny, tiny fragments of ice and rock that make up the comet. You…

Throwback Thursday: The Meteors You’ve Been Waiting For (Synopsis)

"I’m a shooting star. A meteor shower. But I’m not going to die out. I guess I’m more like a comet then. I’m just going to keep on coming back.” -C. JoyBell C. Every year, meteor showers sizzle and fizzle, yet no matter what happens in the skies, there's always one meteor shower that's reliable for…

Does the best time for observing the Perseids depend on your time zone?

You get a better view in the morning, IIRC, because you are looking at them hitting atmosphere with the speed of the earth's orbit adding to the energy (therefore brightness) of the meteorite.

Since we are travelling through a streamer the timezone doesn't make a difference.

There's probably a post with plenty of neat diagrams of orbital mechanics to explain that. Or at least it's worth a mention in the main text, for them what don't already know it.

The meteorites are dust left behind when the comet went through. So when we pass through the path of the orbit of the comet that is the source of that dust, we get a meteorite shower.

Since that dust lane doesn't orbit, we get to see it at the same position in our orbit and we therefore are travelling (the tangent to our orbit at that time) towards the same spot each time we pass through.

Therefore it looks like we are being inundated from the constellation of perseus in the case of the perseids.

NOTE: This isn't 100% accurate, but it's illustrative and a lot closer than Calvin's Dad's "The trees are sneezing".

Why didn't you tell us about Star Trek in the Park? (Portland)