Advice to my young self on my one-year-Con-niversary

"A lot of mothers will do anything for their children, except let them be themselves." -Banksy

One of the great joys I got to experience came last year, when for the very first time, I was invited to be a guest of honor at a most fabulous convention: MidSouthCon 30! 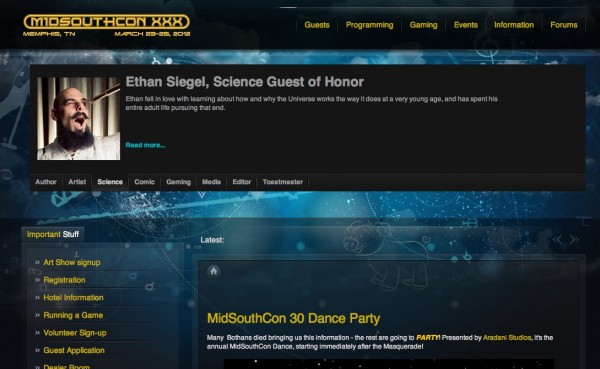 I went into it not knowing what to expect, and I wound up having one of the best times I could have asked for. I met some of the kindest, most interesting people I've ever met in my life, and I felt like everyone there immediately accepted me into their families in a way that I had no right to expect. Yes, I got to sit on panels and talk about interstellar travel, answer questions about theoretical physics, and give a talk on the origins of the Universe... in the costume of my choice. (Not to mention the dance party, the masquerade ball, and the second-to-none hospitality I received there!) 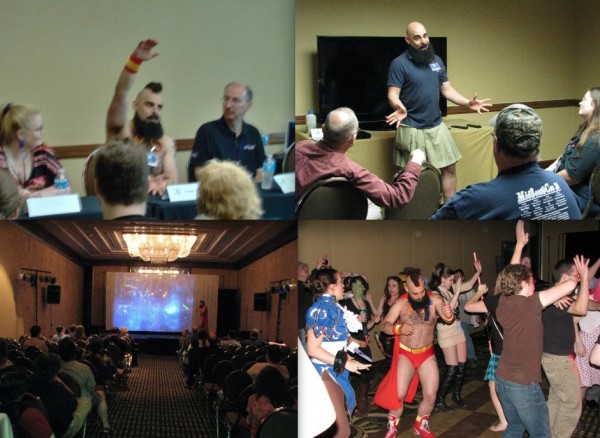 It's a year later now, and MidSouthCon 31 is happening this weekend. Unfortunately, I won't be able to attend this year, I really, truly wish I could be there. But more than that, I wish that I could share that experience with the teenage version of myself. Because there were some real lessons that I wish I hadn't needed to learn in such a difficult fashion, and it would have made my life a lot easier if I had learned them at 13, at 16, or at 19. If I could take what I knew now and pass that experience back to the teenage version of myself, here's what I'd say:

I know what it's like to feel the way you do. The fear, the insecurity, the dread that -- with perhaps the sole exception of the work you're good at -- you're not really worth anything. That you'll never be loved or accepted by your peers, that your friendships will always be fleeting and far-from-genuine, and that you'll always feel alone and alienated. Unless you can change who you are at a fundamental level, you'll never develop that inner peace and confidence you'll need to have a happy, fulfilling life.

And there are things about you that seem so different from everyone else that you don't feel like you'll ever find a place in this world where you feel you'll fit in. When most of your friends were having their first kisses with their boyfriend/girlfriends, you were horrified at the thought of another person even giving you a hug. Going from class-to-class in school was terrifying, because you didn't know where, when or who, but you knew that someone was going to try to fight you in the halls, even if you'd never know why. You were weird; you were different; and worst of all, you were unhappy. You might not ever know it by looking at a picture of yourself, but other than in that one, academic fashion, you didn't even believe in your own self-worth. 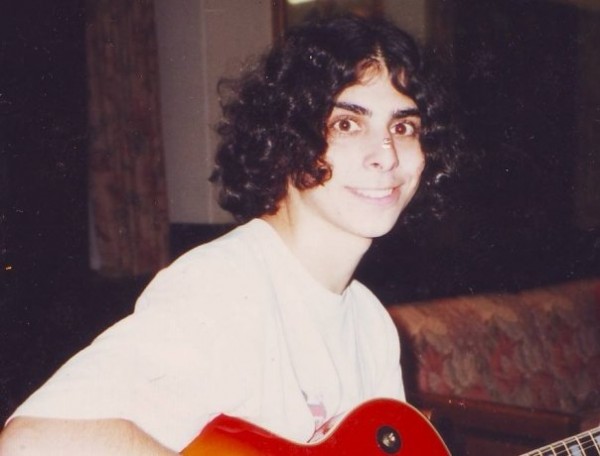 Someday, you won't be a kid anymore, but a man in your mid-30s. When that time comes, there will be even more things that you like that you'll be well aware are considered weird, bizarre, or otherwise abnormal. But those judgments won't even enter into your mind when you think about them. It's your life -- the only one you'll ever get -- and you'll be getting to spend it how you choose. Don't be too ashamed to spend some of it in the fantasy worlds that resonate with you, with the characters that speak to you and the situations and dilemmas that make you feel alive.

So you were a teenager who watched ST:TNG and played Magic: The Gathering, Dungeons & Dragons, and a couple of MUDs online? Was that really something to be ashamed of? Or was the real shame that you couldn't own up to the fact that those were the things you truly enjoyed? You may grow into an adult who delights in -- among other things -- My Little Pony, Game of Thrones, Street Fighter II, Arkham Horror, Gravity Falls, and 8-bit Nintendo Games. There's no shame in that! The real shame would have been if you didn't surround myself with the things and people you find that make you happy. They'll constantly evolve over your life, but the real shame would be if you lived a different life because you felt ashamed of who and what you really were. Once you figure this out, you won't feel like a freak anymore, and the people who'd judge you to be one won't elicit any feelings from you other than pity. Why pity? Because no one's a freak for what they like or who they are, no matter how unpopular it is. You're only a freak if you aren't living a life that's honest with yourself.

And as far as matters of love go, if and when that's something you want, there are plenty of people out there who'll give you a shot. There won't be anyone who understands you completely; how could there ever be? You're constantly finding out new things about your own self, which is what happens so long as you keep on learning! But you will find people who like who you are, who genuinely enjoy the pleasure of your company, who treat you with love, care and respect, and want nothing more for you than to see you happy and well. And when you meet the right person, you'll get your shot at "true love," but it won't be at all like what the teenage version of you expects. Love won't be something that you'll find with someone else; it will be something that the two of you build, together. But you'll never find it if you don't first fall in love with the wonderful and unique person you already are. 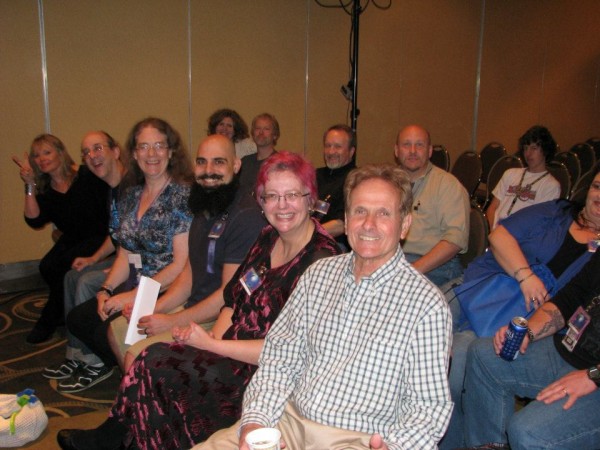 That's what I would have told my young self, and that sort of acceptance -- for the different, for the non-normal, for liking what you like and being whatever it is you feel like being -- was something I just felt overflowing at MidSouthCon. I was surrounded not by people who were just like me, but by people being their own unique selves, and it was wonderful. And that's advice I would pass along to anyone: whatever being true to yourself means to you, however you wish you were living, don't waste any more time not being that person and trying to please someone else or live up to expectations that you yourself don't share. Don't try to fit in with the world; try to fit in with your own internal self, and finding your way in the world will be easier than you ever thought it would. Be honest with yourself about who you are and what you want, become the person you were meant to be, and build yourself a life you'll be proud of, and happy with.

To those of you at MidSouthCon this year (or any other convention that gives you that sense of community), I wish I could be there with you. I wish I was once again sharing in the worlds that excite and delight you, with the joy of hundreds/thousands of people coming together, where everyone's truly free to be exactly who they feel they are on the inside. (And yes, we'll get back to the delights of the physical Universe tomorrow!) Thanks to everyone who made my time at MidSouthCon 30 so memorable, and to everyone -- myself included -- I hope you get to live that way as much as possible each and every day. Hope to see you again soon, my friends.

Great post Ethan! I expect a lot of your readers will be able to relate to this.

This only increases my desire to hang out with you in real life. Given than i'm Med Chem and you're astrophysics, that won't happen, unless of course i see you at Gencon? :)

First off.. I love you and will give you a big internet hug. (they are easier than physical hugs)

second.. that is a scary costume...

keep up the good work. Clearly you have overcome any shyness issues you ever had.

This just makes me smile real big. :^D I'm so glad you found that place! For me, it was BayCon (San Jose, CA). And I wasn't even an unhappy person! The first one I went to, the acceptance and joy in themselves and each other was just *palpable*. EVERYone was welcome. My opinion is that if you go to a Con that *isn't* like that, just leave it and go somewhere else, and don't go to that one again. That's how they all should be, open, fun, and accepting.

Well that would eliminate the need for a TSA x-ray full body scan.

But seriously, you need to host an Astrophysics Special of Saturday Night Live in that costume.
Just be yourself.
Let the comedians be themselves.
Give only your best science answers to their best nonsense.
What better way to learn astrophysics than from the
--- dancing
--- bearded
--- mohawk
--- guy in red
--- speedo
--- cape and
--- tennis shoes

No, it would just mean the TSA would refuse a pat-down option, making it mandatory to have the scanner.

If you're ever in LA, please guest lecture on any topic!

This is very good advice. Well written and well received.

Thanks, great advice and an excellent blog!

haha so fitting, Is that a Gibson Les Paul "Starburst"?