When we look at the vast expanse of stars in the night sky, we can't help but wonder what else is out there. Not just at the gas giants, rocky worlds, comets, asteroids, moons, and homeless planets strewn throughout our galaxy and all the galaxies beyond our own, but about what life -- what possibilities -- exist beyond our home world. 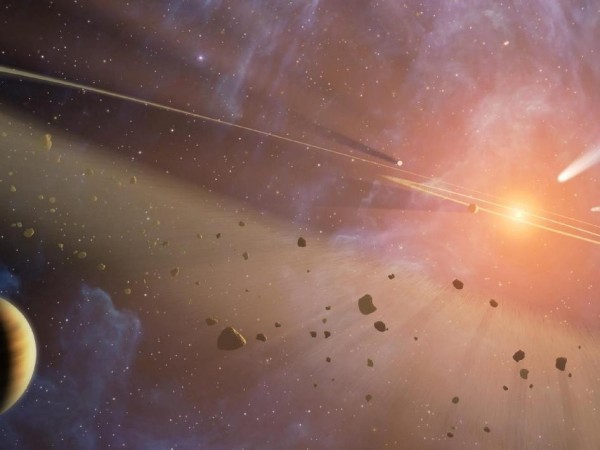 Very recently, a most unusual star -- KIC 8462852 -- had its light-curve data released by Kepler team, containing a series of unusually large, and inconsistent, drops in brightness around the star, fueling speculation that perhaps it's an alien-created megastructure causing that signal. But is that a legitimately probable possibility, or does it say more about us, as humans, than it does about the star system in question?

Brian Koberlein tackles this issue over at Starts With A Bang on Medium!

I'll guess it's most likely a large cloud of debris, as might have resulted from an object entering the star's orbit and getting pulled apart, but not yet spreading out into a nice even disc around the star.

I'll also guess that the first evidence of technologically capable ETs we find will be signs of laser communication between planets in two or more star system. We might spot that as a result of a beam scattering due to dust or debris.

I don't agree with Kardashev: just say Moore's law. Also, given a choice of how to go about building cosmic civilization, I believe it's most likely that an advanced civilization would recognize the need to spread out so its developed star systems extend beyond the range of any single possible disaster such as a supernova or GRB (gamma ray burster), rather than putting all of its proverbial eggs in one basket. For example if the range of lethality of a GRB is 3,000 LY, then you want your civilization to span a distance greater than that, so that if a GRB occurs, some fraction of your civilization will survive and be able to rebuild the rest of it over time.

At those distances, assuming no faster-than-light (FTL) magic, there is no commerce, not even "commerce in ideas." But there is room for sharing ideas across the distance, if for no other reason than mutual backup of each inhabited star system's scientific, technological, genetic, and cultural data. Any sort of conventional radio is relatively inefficient at interstellar distances, and lasers stand a better chance of working. That's what I think "they" are doing, and that's also a possible solution to the Fermi paradox.

Though, question for any working scientists here:

Assume a star with one known viable planet, e.g. our solar system. Assume a civilization capable of astro-engineering, such as building planets from scratch in desirable places. Is there anything that would make it undesirable or not possible, to build more Earths in the existing Earth orbit? Understood that a Dyson ring would be unstable and could drift, because stellar gravity is equally affecting the entire object (is that accurately described as "net angular momentum of the object is zero"?). I would think that a bunch of additional Earths in the existing Earth orbit would be OK because each of them is independently orbiting the Sun and they shouldn't (ha ha, "shouldn't" says the layperson;-) affect each other.

Would that work, or where's my mistake?

not sure "building" another planet is viable, not sure it's even possible in some "reasonable" time.. let's say 100 to 1000 generations.

But as far as gravity and orbit... yes it would have a big impact. You might be not interfering with "original" earth in same orbit if i.e. poles apart... but other planets beyond might get affected in time.. and the more earth's you put in.. the more the effect becomes evident

Thanks, and Oy!, did I just embarrass myself. Yes, more Earths = more gravitational effects on other planets in the system. I should have seen that when I visualized it.

100 - 1000 generations = no problemo, other than the little matter of net gravitational impact on the rest of the system;-)

Humans need to be off Earth in less than 1/2 billion years, otherwise the Sun boils the oceans and "game over." That would be somewhere between "medium term" and "long term." "Short term" = self-sustaining civilization on Mars (most likely in domed caves), a matter of a few centuries. "Medium term" = initial human migration to another star system, perhaps 10,000 years assuming .01c - .03c average velocity, and assuming two or more rounds of robotic exploration preceding human migration aboard ark ships. "Long term" = cosmic civilization on a scale that can beat GRBs, figure approx 10,000 years per each added star system.

"Any sort of conventional radio is relatively inefficient at interstellar distances, and lasers stand a better chance of working."

No,there's no difference in them. Except bandwidth available.

Both go at light speed. Both spread out over distance and lose signal strength.

Except light is far more easily obstructed and is a much narrower range of frequencies, meaning less choice of a range to play in that doesn't get intercepted by random junk.

"Humans need to be off Earth in less than 1/2 billion years, otherwise the Sun boils the oceans and “game over...."

It's a nice time line.. reasonable even.. and I agree with it in what I would like to be the case as well.

On the other hand.. there is no guarantee that we'll survive that far as a species. And not talking about wars and such since even a nuclear war would probably leave survivors. Thinking more in dramatic climate changes caused by whatever factor... raise the temperature by 60'C and it;s game over.. in opposite direction as well.. In a reasonable time.. let's say in a thousand or so years.. or every thousand or so years.. you can expect one MASSIVE coronal ejection... unless we figure out how to totally shield our ever more sensitive and miniature world of light manipulation (electronics..;)) it;s not game over.. but it's back to late bronze age/iron age.. except we or a generation of that time would be hard pressed to go back to that way of living... And I see those as things that are inevitable to happen to earth much sooner than Sun starting to transition to red giant.

In other words.. there really IMO need to exist very favourable odds overall, both externally and internally for us to be able to thrive and survive to reach medium term settlements

I have a hard time seeing how it would ever be easier to move a working ecosystem and large population interstellar compared to intersystem. Sun heats up, you don't head for Alpha Centauri, you head for Mars or Ceres or Ganymede or Titan (or maybe all of them...in that order). You move out as it grows bigger, hole up for the helium flash, then move back inward as it grows smaller. You'd have to find some really astoundingly better prospect to justify going to Alpha Centauri to terraform a rock vs. going to Saturn to terraform a rock. We're talking about a factor of 10,000 times difference in distance. So if you don't know the next system over has anything more suitable for you than a Mars or Ganymede, there is no sense in skipping past Mars or Ganymede to go there. And if you talk about really 'big' moves, such as moving planets (vs. using ships), the same thing applies; its going to be far easier to move your planet intersystem back and forth as the sun goes through its cycle, than it would be to move it to another system.