The smallest galaxies contain the most dark matter (Synopsis)

"A dwarf standing on the shoulders of a giant may see farther than a giant himself." -Robert Burton

Both the internal motions of individual galaxies and the wholesale motions of galaxies within clusters require much more mass than normal matter — protons, neutrons and electrons — can account for: about five times as much. Because this can't be any of the Standard Model particles, and it can't interact either electromagnetically or with the nuclear forces, we refer to it as dark matter.

But oddly enough, the smallest galaxies exhibit dozens or even hundreds of times as much dark matter as normal matter, a puzzle which only makes sense if you consider the incredible violence of star birth and death. 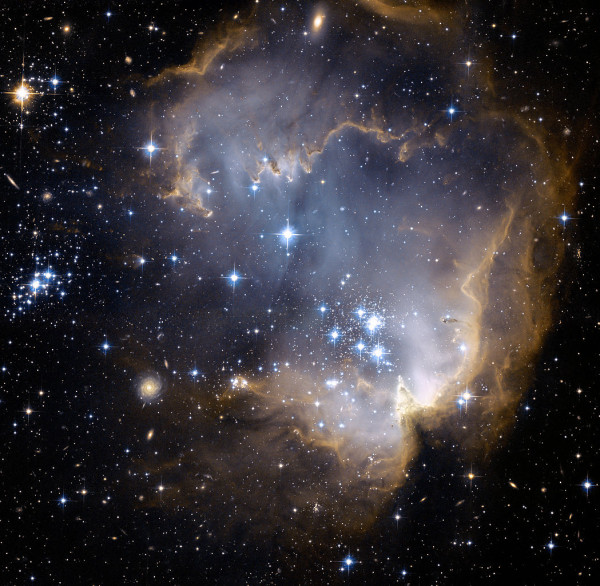 Come find out all the details of how we know this and why this is expected on Forbes!

Do we see the effect of these dark matter clumps on the outer rim stars of the host galaxy?

Could we get dark matter only clumps? I.I. could a cloud of DM form something like a small galaxy, but never attract enough baryonic matter to form stars? Or is there always enough gas to start forming stars, and its only radiation pressure that expels the bulk of the normal matter?

Could the collapse of the wave function within the internal workings of atoms, the nucleus to be exact, cause an absents of space-time thus requiring space-time to rush in to replace that which as collapsed (gravity). That is if space-time were a seething caldron of quantum foam. The medium that supported the wave in the first place. Are we missing a large part of the picture. Maybe matter does not exist without space-time or quantum foam or dark matter or what ever but consumes it like a fuel. This action of matter sucking space-time explains gravity exactly. Things don't fall they just go with the flow.
in a large massive galactic system space-time becomes a rare commodity and it spins and drains like a whirlpool. The stars are caught up in the flow. Just a thought.

"Could we get dark matter only clumps? "

They would be very diffuse clumps. In another 100 billion years, they could be more clumpy, but they wouldn't be all that clumpy still.

For what to you envision clumpy dark matter being of import? It's rather central to what a clump is.

"To further clarify what I am asking: To correctly model the observed spin of a spiral galaxy requires a very precise halo distribution of DM."

Only if you have a very precise calculation of the observed spin of a spiral galaxy throughout its volume.