“All enterprises that are entered into with indiscreet zeal may be pursued with great vigor at first, but are sure to collapse in the end.” -Tacitus

Dark matter makes up the overwhelming majority of mass in the Universe. With five times as much of it as there is normal matter, and the fact that it doesn’t emit or absorb light but does interact gravitationally, it might seem like the perfect candidate to form black holes. After all, it’s named “dark matter” to begin with, and black holes are perhaps the darkest form of matter in the whole Universe. 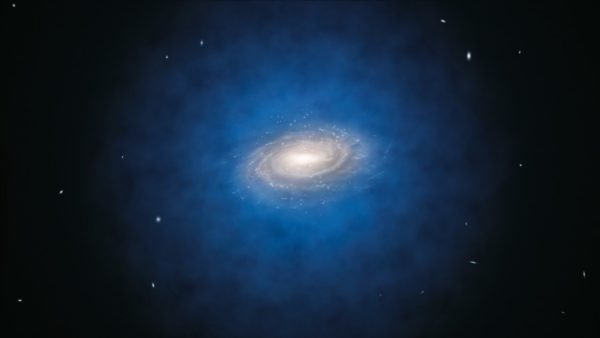 While stars might cluster in the disk and the normal matter might be restricted to a nearby region around the stars, dark matter extends in a halo more than 10 times the extent of the luminous portion. Image credit: ESO/L. Calçada.

But black holes are also extremely collapsed objects, while dark matter is incredibly diffuse. The physics of what enables an object to collapse isn’t governed by gravity, but rather by the other forces: the ones that enable energy transfer, momentum loss and inelastic collisions. As far as we can tell, those are properties that are unique to the particles of the Standard Model, and dark matter’s inability to interact in those lossy fashions means it cannot collapse. 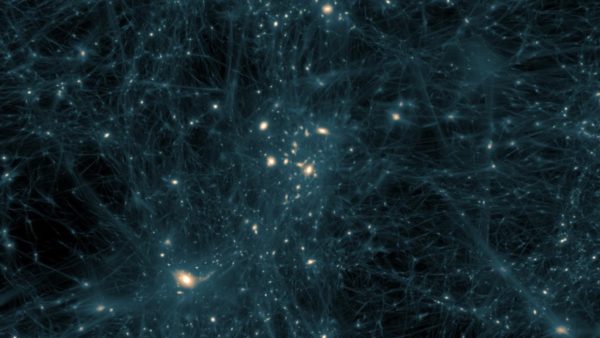 The cosmic web is driven by dark matter, but the small structures along the filaments form by the collapse of normal, electromagnetically-interacting matter. Image credit: Ralf Kaehler, Oliver Hahn and Tom Abel (KIPAC).

No collapse means no black holes. That’s why dark matter might govern the great cosmic web, but can’t form the smaller bound structures we find within a galaxy.

What's the story on the actual progress of trying to put it within the standard model? For as long as I remember, the story (here on blog, but elsewhere as well) revolves around more and more observations that it's real. OK, but what about the actual particle? Are we really out of ideas for more than 20 years? IMO axions sound promising, but is there no model that doesn't require super simetry?

It almost.. almost.. seems like the majority of community has accepted it, and fell into the usual re-print of how we know about it. But I would really be interested to hear from time to time if some groups are making any progress in actually figuring where or how it sits in grand scheme of things in the theoretical sense.

The Axion model does not require supersymmetry. Those particles were actually postulated as part of a solution to the strong CP problem. Experimental attempts have thus far been fruitless, but they still haven't yet been completely ruled out, and bounds on their properties from failed experiments to find them still make them reasonable candidates for dark matter.

Another hypothesized dark matter candidate is the sterile neutrino. No neutrinos have ever been observed with right handed chirality, and the fact that they have masses which are less than millionth than the next lighter Standard Model particle is troubling from a theoretical point of view. If you wanted to use the Higgs mechanism to explain neutrino masses, it seems you might have to also postulate a right-handed sterile neutrino with a mass as great as the ordinary left-handed neutrinos are small. Experiments are underway to find them if they exist.

So no, not all cold dark matter candidates require supersymmetry.

The Forbes version of the blog post says that dark matter would pass through the Earth and the orbig would make a near-perfect ellipse.

It certainly would if all the mass of the Earth were concentrated at the center.

But if the mass of the Earth is distributed uniformly over Earth's sphere, then when inside the sphere, the gravitational force goes as the distance r from the center instead of 1/r^2, and the path will not be elliptical.

thank you for the clarification on axions and SUSY. As for sterile neutrinos, was never a big fan of them as an explanation. They might exist, but I don't think they are the DM we are looking for.

So even if DM cannot FORM a black hole, what happens if DM falls into an EXISTING black hole. Wouldn't it be trapped inside the event horizon like normal matter? Seems it would still allow the growth into super black holes.

Gary S makes a good point, but it's resolvable.. Dark matter would ignore the super-heated environment, but it wouldn't be able to ignore tidal forces, so they should shred at the firewall boundary like normal matter.
You can't actually reach the event horizon of a black hole. As you approach it, time slows down, which also slows your approach. Reaching the event horizon would require the same effort as accelerating a particle to the speed of light. Thus, a black hole would accumulate dark matter in its halo, trapped in slow time.
However, remember that a black hole doesn't have more attraction than any normal star at standard orbital distances. A 2 solar mass black hole would have the same gravitational qualities as a 2 solar mass star if you're orbiting it at, for instance, Neptune's orbital distance, and you still wouldn't have the interactions required for it to spiral inwards. Thus, the total amount of dark matter in the immediate volume of space of the black hole wouldn't be increased.

@Gary S #5: You're quite right, in principle. It's the quantitative analysis which shows that this is not a particularly good mechanism for black hole growth.

1) As discussed in Ethan's article, DM doesn't have dissipative interactions (if it did, we wouldn't see its apparent presence in the form of extended haloes).

2) Hence, DM in the region around a BH won't form an accretion disk, and won't get slowed down enough to fall in.

3) Instead, you've got free-streaming DM in the halo, flowing past a BH (equivalently, the BH orbiting through the DM halo). The only stuff which will fall in is the small amount of DM which scores a "direct hit" in the small circular area enclosed by the event horizon (more precisely, the innermost stable circular orbit).

With a (current) mass of 4.1 million solar masses, it will take Sgr A* about 4 trillion years just to double its current mass using dark matter alone.

Since non-SMBH's are even smaller (by 5-6 orders of magnitude!), mass increase from dark matter is entirely negligible compared to normal matter accretion.

In addition to DM orbits inside a massive object not being conic sections -covered by Tim @3, its the ability to dissipate virial energy via collisions and radiation of heat, that allows baryonic matter to form condensed objects. Its the cooling of gas clouds that changes the balance of pressure versus gravity in favor of gravity. Not stickiness of matter. In fact for the first stars we didn't have any dust, just hydrogen and Helium. The collapse of a gas cloud/protostar is controlled by the rate of heat loss. Stickiness is very likely involved with the formation of planets, asteroids and comets however.