High-temperature superconductors (HTS), capable of storing and transmitting electricity with perfect efficiency, are a theoretical stumbling block. The mechanism underlying HTS behavior is a mystery, and the subject of significant contention and investigation among scientists. This puzzle, unlike headline-making unknowns such as dark energy (admittedly awesome and worth losing sleep over), could revolutionize our entire energy infrastructure. But before HTS materials can flood the electricity market, they need to work their magic closer to room temperature (high-temperature is a bit misleading, as these still need to be chilled to hundreds of degrees Fahrenheit below zero). Engineering the next generation of materials means manipulating HTS at its most fundamental.

And way down at the fundamental level, HTS gets weird. Physicists at Brookhaven Lab just probed HTS fluctuations, and they got some unexpected results.

Water, way less exotic and much better understood, can help decode the findings. On its way to a rollicking boil, water develops isolates bubbles of gas – these appear suddenly along the bottom of a pot and then float up through the liquid. This is an in-between zone, the transition space between two very different phases of matter. Water doesn’t transform instantaneously into vapor, instead exhibiting fluctuations across a wide threshold.

As it turns out, as copper-oxide insulators cool down, they exhibit similarly fleeting “bubbles” of superconductivity. Inside that superconductor-insulator transition zone, intermittent islands flit in and out of existence. And that’s not even the strangest part. Cooled down even closer to absolute zero, these superconducting fluctuations vanish entirely – and that’s what really surprised physicists.

This unexpected quenching of superconductivity finds a useful analog, again, in water. Imagine that the flow of electricity between electrodes resembles the motion of a river rushing downhill. Custom-built conductors act as a channel designed to carry electric current as efficiently as possible, just as a smoothly engineered canal carries water.

If the canal is poorly constructed, full of sudden and jagged pits, the water level directly impacts the quality of the flow. A high volume of water will race along continuously, even if occasionally given to the turbulence of crashing whitewater. If, however, the water level falls below some critical value, the current will tumble into those pits, slowing to a trickle or stopping completely. 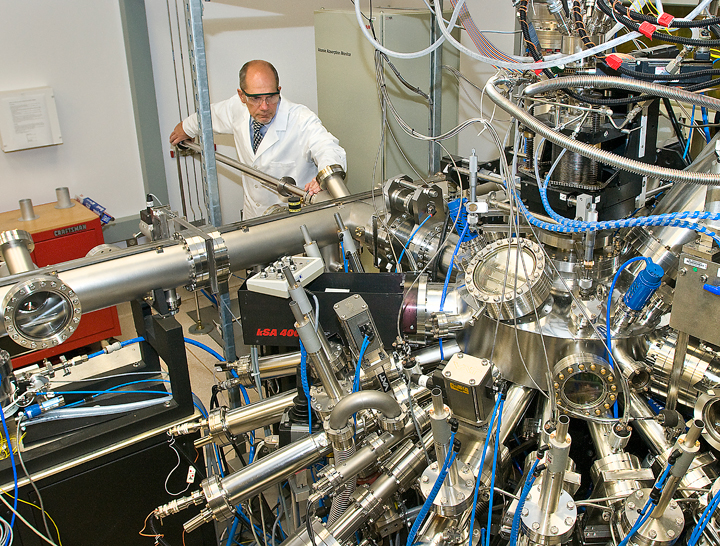 In these HTS experiments, the scientists measured the flow of electricity to discern the structure of custom-built copper-oxide “canals.” The water volume corresponds to the density of electrons in the system, which was  fine-tuned with that giant device seen to the right. While atomically smooth, the materials contained deliberately built-in defects – randomly distributed strontium atoms. Once super-cold, these imperfections acted like pits that trapped flowing electrons, rendering them immobile.

“The traps are there all the time, but the electrons only become stuck at extremely low temperature,” said Brookhaven physicist Ivan Bozovic. “This behavior, called electron localization, makes the material insulating. With some heating, however, the electrons gain enough kinetic energy to jump out of the holes and maintain metallic conductivity – and, in the present case, superconductivity.”

There’s (at least) one more layer of weird to add to these frigid traps. The researchers not only discovered that the fluctuations vanish beyond that super-cold threshold, but that the trapping pattern changes with each test. Resistivity depends not just on temperature, but also on the material’s memory – how and where the electrons were previously trapped. This phenomenon, called hysteresis, strongly indicates that the underlying mechanism behind the superconductor-insulator transition is tied to electron localization.

The study unveiled new characteristics of high-temperature superconductivity, and it offers another step in the ongoing quest to understand and harness the phenomenon. Get the full story in the official press release, and get deep into the full electron-doping chemistry in the scientific paper.

It is an intersting article. I would be seriously reading it and related reports. However, to make right step to understand the origin of superconductivity, we need to understand why BCS theory could not explain the phenomenon in general (i.e. superconductivity of convensional metallic superconductors and HTS). As shown in [ http://www.scribd.com/doc/110441679/Intrinsic-Problems-Superfluid-Theor… ] BCS theory or other similar theories of superconductivity have intrinsic problems ]. Consequently, in spite of their mathematical accuracy, they can not reveal clear, complete and experimentally consistent understanding of the phenomenon. The phenomenon of such a great importance needs to have its correct theoretical understanding as soon as possible and in this respect we should not ignore newer ideas such as that developed in [ http://www.scribd.com/doc/110681115/First-Quantization-Theory-of-Superc… ]. I would greatly appreciate if we can discuss the merits and demerits of these studies.

Thank you for another magnificent post. Where else could anyone get that kind of info in such a perfect way of writing? I've a presentation next week, and I'm on the look for such info.