David Appell at Quark Soup draws our attention (via Stoat) to a graph in the recent America's Climate Choices report from the NAS/NRC. If the forecasts on which the authors rely come to pass, it's going to take almost a couple of decades for U.S. energy-related CO2 emissions to return to post-recession levels. Sounds like good news. 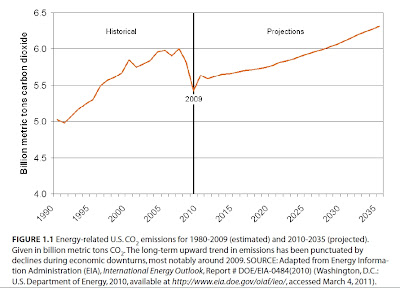 Two years ago, Lester Brown at the Earth Policy Institute wrote of a watershed moment, and while it looks like he was a bit too enthusiastic -- long-term, carbon emissions still rise -- he might have been on to something.

The United States has ended a century of rising carbon emissions and has now entered a new energy era, one of declining emissions. Peak carbon is now history. What had appeared to be hopelessly difficult is happening at amazing speed.

But the NRC report draws on data from the U.S. Energy Information Administration's 2010 World Energy Outlook, which also offers a bigger picture. And as this figure shows, things aren't quite as optimistic at the global level.

So, basically, the OECD, is stalled at about 13 or 14 Gt of CO2 -- with a bit under half that coming from the U.S. As has been suggested before, the big economic downturn seems to have "bought' us two decades or breathing room, effectively doing more to bring down emissions than anything the House and Senate even considered passing in climate/energy legislation. Alas, the rest of the world is headed nowhere but up.

Two observations. First, stalled at current levels is better than rising fast, but compared with the urgent need to reduce our emissions by at least 80% (and probably more like 100%) over the next few decades, it's hardly cause for celebration. Second, the atmosphere doesn't care where the GHGs come from, so let's not allow modest success at home distract us from the enormous challenge that comes with helping others join the privileged club without wrecking the planet in the process.

Yeah, and it's not success. It's more like the old surgeon's addage: "Don't worry, the bleeding always stops! Eventually..."

In fact, with an economic down turn we might expect to see the opposite effect. Imagine if this down turn had happened just as strict auto emmissions regulations were about to go into effect. The truth is that as of a few years ago it became unnecessary to inspect for emissions every car every year in the US because the vast majority of cars were built with reduced emissions designed in. But had a major downturn occurred at the write (wrong) moment in history, that turnover may have been delayed a decade as everyone limped along in their old dirty cars.

Had my wife not gotten screwed by her union and I not gotten laid off by the U and our house not have lost enough value that it will cost us to sell it, I promise you we'd have a hybrid in the garage, and our house and garage would be 1/3 the distance from the longest commute we have now, possibly on a bus line, instead of very very far away. Our CO2 emissions would be a fraction of what they are now if we had the ability to make changes that we really, really want to make. We are not alone. I'm not sure how one factors this in.

The graph shows the clear trend that we can do more with less, although we then go and buy more stuff anyway! However, there is no reason we cannot push down consumption even further, especially with better distribution technologies. Walt Patterson and Amory Lovins have been pushing this idea for years.

The developing world tends to buy older technologies (both in terms of electrical generation/distribution and white goods) and of course are catching up in the sort of consumption which we in the west have long enjoyed. But its clear that China is thinking seriously about how relatively energy inefficient it is, and it might be that the same A+++ washing machines which we buy in the west are also the ones which the new Chinese consumer not only wants to buy, but has to.

"Our CO2 emissions would be a fraction of what they are now if we had the ability to make changes that we really, really want to make."

Look Laden, if you really believed that your CO2 emissions were destroying the planet you'd be living in a goddamn tent eating chard you grew in fertilizer you made from your own feces.

The truth is you wouldn't even mildly inconvenience yourself in the name of "decarbonization" let alone make the actual life changing sacrifices you want to impose on everyone else.

OK, I'll come clean: this reminds me of an embarrassingly recent conversation with my materials science-trained boyfriend.