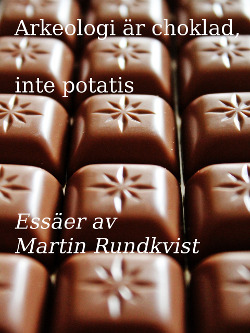 In December of last year I finished a collection of short humorous archaeological essays. It's my sixth book, my first one in Swedish, my first one aimed at the lay reader. Since then I've been waiting for established Swedish publishing houses to pronounce judgement on it. Five of them have now turned it down, none with any very detailed explanation, but most of them in terms suggesting that they think it's competently written but it probably wouldn't sell much.

As a long-time blogger and e-book reader, I am not particularly disheartened by this. After all, this blog has a greater number of hits in a week than the entire first print run of a typical Swedish pop-sci book. And so, here it is, my new e-book, Arkeologi är choklad, inte potatis ("Archaeology is chocolate, not potatoes")! ISBN 978-91-639-2057-8, both EPUB and MOBI formats. It's distributed under a Creative Commons, Attribution, Non Commercial, No Derivatives licence. Please help me spread it around! It's on Academia.edu as well.

(Having said No Derivatives, I should hasten to point out that I would be very happy to talk to anyone who feels like translating the book.)

The book is braided of three strings. One is a reverse chronological series of essays on archaeological periods seen through the lenses of sites I've worked on, from the Early Modern at Djurhamn all the way back to the Early Mesolithic with Roger & Mattias at Tyresta. The second string consists of partly quite polemical pieces on what archaeology is like and how it works in Swedish society, including titles like “We never go to Egypt” and “There are no jobs and you don't want the jobs there are”. The third string is a chronological series titled “My Strange Career”.

To whet the appetite of Swedish colleagues, let me say that I mention a considerable number of names of people in Swedish archaeology whom I have reason to thank, and I talk about a few other possibly identifiable people without mentioning their names.

I'm very keen to learn what everybody thinks!

"Five of them have now turned it down"

Robert Pirsig (who has Swedish ancestry on his mother's side) wrote in the foreword to one of the editions of the truly classic Zen and the Art of Motorcycle Maintenance that something like 130(!) publishers had rejected the manuscript before one finally took it on, expecting to lose money but nevertheless publishing it because this is the sort of thing he went into publishing to do. (It subsequently became a best seller, and is one of the few books I have read more than once).

I'll probably read the eBook. Is the .epub file all I need? (I have an eBook reader which reads epub files (and text and PDF, though of course epub is best for eBooks).

Are there any pictures in it? If so, are they in colour?

I'm pretty sure there aren't 130 publishing houses that put out books in Swedish.

The .epub is all you need. There are no pictures in the book except for the cover.

Are you carrying a smartphone? That machine is potentially any book you like at any time. It's not even expensive. My essay collection, for instance, is free. (-;

Thanks! What reader software are you running under Win 10?

epub! It is available in the Windows store. I have read a few of the essays and they are really good.

The format in the Windows 10 app looks like a draft but it is readable. Still this is great material for a column in a newspaper. You are so much better than Dick Harrison!

Thanks! People are more interested in history than in archaeology, I'm afraid.

Thank you, Martin! This sounds exactly like what I'd love to read from you. I shall attack it with my poor second-generation Norwegian, aided by google translate.

So much vocabulary, and I'm only a third through! Just a few:

The essays tell good stories and also capture the dry, understated humor that I associate with Swedes, or maybe just you.