Democratic Primaries in Arizona, Utah, and Idaho: Sanders is still in the race

This post was written in two parts, pre-primary and post-primary. To see the result and a discussion of what they mean, skip down to the last part of the post, where I'll discuss why Tuesday's results may mean that Sanders could win the primary.

Here, I'll review what my recently upgraded predictive model indicates for today's primaries in Arizona, Idaho, and Utah. Also I'll provide a list of states and delegate counts for the upcoming primaries (including today's) that would have to be realized for Sanders to catch up to Clinton. At the end of the post, you'll find results of today's primaries, and some discussion, when available.

First, the expected outcome of today's primaries based on this model: 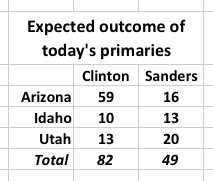 Clinton is expected to win big in Arizona, while Sanders is expected to squeak by in Idaho and win handily in Utah. The total delegate count for the day would be 82:49, Clinton:Sanders, so if this model is accurate, Clinton will win the day. As I've noted before, this model tends to under-predict Sanders' wins when he does win, so the delegate count could be closer.

Or, this could be totally wrong and Sanders does much better, which would require me to go back to the drawing board. Which, of course, I'll do.

In order for Sanders to catch up to Clinton, he'll have to do much better than he's done, even given the fact that he is favored in a lot of upcoming states. If we take all the upcoming states together and simply give Sanders even wins across the states sufficient to tie Clinton on the last day of contests, then he'll need to win Arizona 44:31, Idaho 14:9, and Utah 19:14.

Here's a chart of the outcomes across all states for Sanders and Clinton to finish the primary season in a tie. 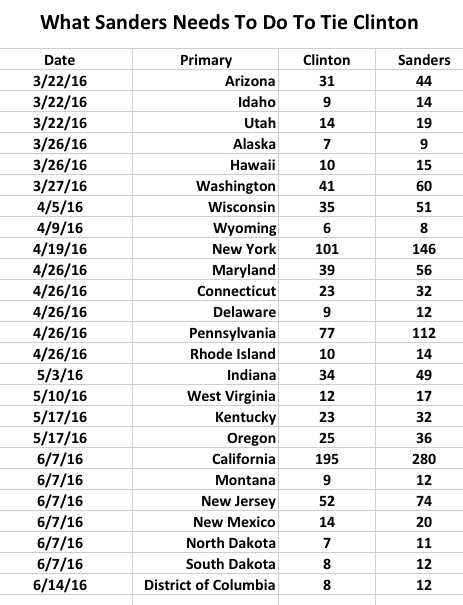 This is, of course, totally unrealistic. Sanders would likely do much better in some places, and just OK in others. But this chart serves as a basis of comparison for future races.

Every primary or caucus is a test of a hypothesis. The hypothesis that Clinton will do what I suggested she will do here is being tested by today's contests. If Clinton gets somewhere around 75 to 89 delegates, the hypothesis is not rejected. If Sanders manages to perform much better than 49 delegates, say, over 62 or so, then the hypothesis has to be rejected (I'm not being formal here with rejection levels) and the possibility of him catching up has to be re-evaluated. If, of course, Sanders gets fewer than 40 or so delegates today, than he will have an even steeper uphill battle for the rest of the primary season.

I'll add more information and commentary below after we get results!

OK, it is early the next morning and we have results, but the results are not entirely complete. Because of oddness in the way delegates are assigned, it is often the case that the votes are counted, the primary results published, but the delegate allocation incomplete. Texas took forever, it seems, to post its actual delegate count, for example. All three states that had contests yesterday have incomplete delegate counts, even though we know how people voted. Proportional representation applies in all three states but things are not so simple.

For example, in Arizona, a certain number of delegates are eventually (in April) selected at the congressional district level, a certain number are at large, a certain number are linked to party officialdom, and a certain number are linked to constitutional office. Delegates are selected at different times (most at the convention in April). There is a right of review (by the candidates) of some of these delegates. Some delegates are committed to vote a certain way on the first ballot at the national convention, some are uncommitted. There are threshold effects whereby certain delegates may not be assigned if the threshold is not met in the preference ballot (I think ... this part confuses me). A delegate is both a number (i.e., 10 delegates for Mary and 10 Delegates for Sam) and a person (Joe Bleaugh will go the National Convention as a delegate). There are lists of delegates (as in number as well as personage) and the exact number of "delegates" that might be on that list depends on ... all of the above.

And that is the simple version of it. The rules are 18 pages long. Arizona is not unusual. Anyway, Arizona has 75 pledged delegates, of which 63 are counted as pledged (though they don't exist yet as people) now, but the rest will be eventually. In the end, the allocation will be close to proportional, but because of the precinct and district level math, and other things, the exact number for each candidate probably can't be known at this time.

So, given all that, I'm going to go out on a limb and say that in Arizona, Clinton will have 44 pledged delegates, and Sanders will have 31. This is not the same number you will see reported, because several delegates are listed as "available" for reasons cited above.

Using the same method, Idaho will award 5 delegates to Clinton and a whopping 18 delegates to Sanders. This is close to the reported amount, but off by one. I'll attribute that to the Washington Post's rounding error.

Meanwhile, Utah has reported delegates nice and clean like, straight shooters that they are, and we have 18 assigned to Sanders and 5 assigned to clinton.

However, the numbers are different than expected. Sanders did much better than my model suggested and better than mainstream media expected.

My model had predicted that Clinton would walk away from yesterday's contests with 82 delegates to Sanders' 49 delegates. Instead, depending on rounding and other factors, Clinton will have 54 and Sanders 67.

This means that Sanders is walking away from Tuesday's contests with more delegates than Clinton instead of the other way around.

I've stated several times that Sanders has to average 60% of the take for the rest of the contest in order to tie clinton. He didn't do that this time, he only got 55%. But that is 55% on a day when the largest contest, Arizona, was expected to go very favorably towards Clinton. In other words, because of the variation across primaries noted above in the discussion of "what Sanders needs to do to tie Clinton," Sanders may have actually done what he needs to do this week.

You see, Sanders is expected to get about 48% of the votes here on in, with Clinton at about 52%. He needs to achieve a seemingly unlikely 60%. Last night, he got 55%. My model suggested that last night he'd get less than the overall expected, by a tiny a mount (46.7%) but he got much more.

Sanders is expected to win many of the upcoming states. Hawaii and Alaska are next, and I have no idea what will happen in Hawaii. But he will likely win Alaska, then Washington, then Wisconsin, then Wyoming and, I think, New York. My current prediction is that he'll take about 57% of the delegates trough that period, but if he performs better during that time than expected at the same level as yesterday, he could easily exceed the required 60% return and move significantly toward catching up to Clinton.

All I can say is that I like both candidates a lot and will be happy with either one. If you are supporting either of these candidates, I hope you keep in mind that it is still possible that the other candidate, the one you don't support, whoever that is, may win. Vote blue no matter who!

Looks like Sanders actually will get more pledged delegates because of solid wins in Utah and Idaho, and not losing as badly in Arizona. I read that some Arizonans stood in line for up to four hours only to find that they were no longer registered Democrats. They had been switched to Independents, Republicans, even Libertarians. They were given provisional ballots.

The morning news is annoying. They always add in the uncommitted delegates to Clinton's total, but never to Trump's total.

Here's a good interview of my former co-blogger, Michael, regarding the populist movement:
http://www.salon.com/2016/03/22/he_is_already_a_winner_why_paul_krugman…

Greg, why does the NYT list these results? Is this a matter of mis-match in the announced totals vs the timing of your post?