In which we do a little ResearchBlogging, taking a look at a slightly confusing paper putting a new twist on the double-slit experiment.

I'm off to California this afternoon, spending the rest of the week at DAMOP in Pasadena (not presenting this year, just hanging out to see the coolest new stuff in Atomic, Molecular, and Optical Physics). I don't want to leave the blog with just a cute-kid video for the whole week, though, so here's some had-core physics: a new paper in the Proceedings of the National Academy of Sciences (freely available online), looking at a new sort of double-slit experiment.

I decided to write about this, because I thought the Ars Technica write-up was a little muddled, and figured I could do better. That turns out to be hard to do, though, because the paper itself is a little muddled. I'm still not entirely sure I understand their explanation of what's going on, but I'll give it a go.

OK, so, what's this about? What do they mean "unraveled by a different mode?" Sadly, that's a title pun, and not a terribly good one. What they've done is set up a double-slit experiment that differes from past experiments in that the laser they use for it operates in a different mode than a "normal" laser.

Different mode? So, what, it works using sound waves? Gamma rays? N-Rays? "Mode" is a term of art, here, referring to the spatial profile of the laser. An "ordinary" laser produces a single round spot with a smooth profile, but that's only one possible way to run the laser, called a "TEM00 mode" for reasons that don't really concern us. What they did here is to modify a laser to run in a "TEM01" mode, which has a two-lobed intensity pattern like two littel dots right next to each other. They then sent this laser into a double-slit apparatus, like so:

Thanks to this laser, they were able to both determine which slit the light went through, and also see wave-like behavior on the far side, namely an interference pattern.

Wait, I thought that was impossible? Right, in the traditional double-slit, you would say that once you know that a photon passed through a particular slit, which is a particle-like behavior, you destroy any possibility of an interference pattern showing wave-like behavior. That's the "complementarity" of the title-- wave and particle descriptions are supposed to be complementary and thus mutually exclusive.

So, like, they've blown that apart completely, then? Well, not really. "Complementarity" is kind of a slippery thing. Historically, it's tended to mean whatever Niels Bohr needed it to mean in order to explain a given experiment. Since his death, its meaning hasn't gotten a whole lot clearer. What this paper really does is to point out some of that ambiguity.

What does that even mean? Let's talk about what they did, first, OK?

Sure, if it makes you happy Thank you.

What they did is to take a TEM01 laser and send it into a special crystal that produces an entangled pair of photons. The distribution of these entangled photons mirrors the pump beam, so what they get out also looks kind of like a TEM01 beam, with two lobes, only there are two photons in different places occupying this distribution. 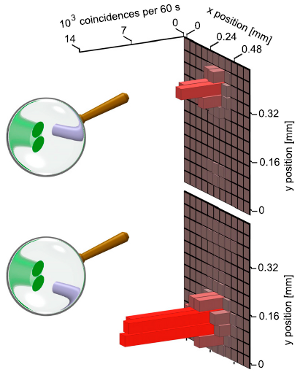 And this is how they know which slit the photon went through? Exactly. They use a small optical fiber to collect only the top or bottom lobe of one photon from the pair, and send the other one onto the double-slit, aligned so that the top lobe hits the top slit only, and the bottom lobe hits the bottom slit only. If they put a similar detector behind the slits, they can confirm that when they look for a photon arriving behind the slits at the same time that one hits the top/bottom detector, they only see photons in the appropriate slit, as seen in the figure at right. In this case, they're looking in the "near field," which means that the fibers to detect the photons are right behind the slit, too close to see an interference pattern.

So, how does this not destroy the interference? Well, it does while they're doing this measurement. Having used this measurement to show that the top/bottom correlation works, though, they move the detector behind the slits into the "far field," which means more or less what you expect-- far enough back to see an interference pattern. When they do that, and look at photons where they know which slit the light went through, they see an interference pattern.

And how does that make any sense at all? That's the muddled part. The interference pattern that they see has to do with the mode structure of the laser-- that is, the fact that it has the two lobes. I think that what's going on here is that due to the funny mode, the photon that goes through one of the two slits still has two components to it-- it's in a superposition of two different states corresponding to slightly different directions of travel (loosely speaking). Because of that, you can still get interference, between the two different states within the state of the single photon.

And this proves... what, exactly Well, I think you could explain it as showing that photons are still photons, even when you know which slit the photon went through. The which-slit information doesn't magically make them into classical particles forever-- they still have wave nature, due to the TEM01 structure, and that wave nature is what gives you the interference.

There's got to be a "but" here, though. Yeah, which is that I'm not entirely sure I've got their explanation right. I think I understand it, but there are still some weird parts, chiefly the fact that the interference pattern they see seems to require there to be two slits. If it were purely a mode thing, I would expect to see the interference even with one of the slits blocked, but the images they show in Fig. 5 show clear interference in the two-slit case, but not the one-slit case. Which I don't understand.

They even have a puzzling statement along the same lines, writing:

This analysis shows that the interference fringes in Fig. 4 are a consequence of the TEM01 mode. Therefore, one might wonder if the mechanical double-slit is even necessary, especially because the one of the two slits is matched to the separation of the two intensity maxima of the mode. Moreover, our theoretical analysis does not contain the slits and we still obtain the fringes. Therefore, interference may be observable even without the double-slit but a substantial loss in contrast may occur.

This seems to suggest that they don't really understand it, either. But then I don't understand why they would publish it. And there's another section talking about correlations between atoms in the crystal that produces the entangled photons that I don't understand at all.

So, like I said, kind of muddled. I think it's a cute and clever demonstration experiment, but I'm still a little hazy on what it is that they've demonstrated.

So, like you said, muddled. Exactly. But kind of cool all the same. And, who knows, maybe some more expert reader will come along and leave a comment clearing things up. Or maybe they'll turn out to be presenting at DAMOP, and I can clear this up there...

The main thing I have learnt about this so far is that PNAS will publish papers about quantum physics. That thought never occurred to me before.

Every now and then, something turns up there. It's not something I think to check regularly, but I've seen a few quantum papers show up via news sites reporting on them (as happened here...).

(Hmm, my earlier comments seems to have gotten eaten. That's what I get from trying to post from a tablet, I guess.)

I have to read the paper, but there are a couple of questions that occur to me.

First, what's the photon rate? Slow enough that they're able to detect individual photon coincidences with the detector in the near field. Is it slow enough that we can be confident that only one photon is going through at a time, or is it plausible that the photons are interfering with each other?

Second, is it possible that the entanglement gets broken before (insofar as you can use terms like "before" when talking about these sorts of quantum experiments) the photon goes through the double slits? That is, the photon that doesn't go through the slits *will* be detected as being in one or the other lobe no matter what. So, somewhere, its wavefunction collapses. For there to be anything surprising here, the two have to remain entangled so that both wavefunctions collapse together. Otherwise, if the entanglement is broken, each photon does what it does. The slit photon's wave function doesn't collapse until it hits th detection screen, and includes amplituedes from both paths, while the non-slit photon collapses when it's detected. Unless we can already be very sure that that they have to have remained entangled, it would take a Bell's-inequality-like statistical test of some sort to really show that they did in fact remain entangled, and that anything surprising is going on here.

Photons are not entangled nor interfere. Modes can do both. Photons are excitations of modes

In my unqualified opinion, what this shows is the act of measuring it self does not necessarily have to collapse the wave state. There are people out there who have been saying, "The particle knows when it is being observed."

Well, not the case, our methods of observation are what messes things up, not the observation itself. This experiment shows that because when we observe one of the entangled photons we still get a wave pattern.