...and The Pip will be five. Happy birthday, Little Dude!

Oh, yeah, there was also some kind of election. In which a bunch of crazy people lost, and a guy I played rugby with was elected a US Senator. Which is a great way to celebrate the one-year anniversary of this momentous occasion.

And here's the "featured image" pasted into the post, for those reading via RSS. It's a grainy cell-phone picture from a couple of days ago, when Grandma and Grandpa brought up a big birthday balloon: 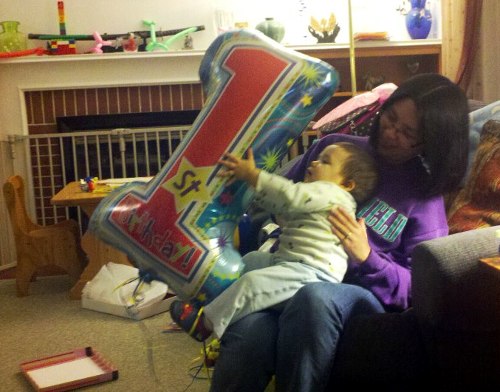 It's hard to be a little dude with a great big balloon.

Here's a somewhat better picture, of The Pip humoring Grandpa last week, when they came up for Halloween. It's from long-ish range, because Il Duderino had conjunctivitis last week, and looked like a prize fighter for several days. 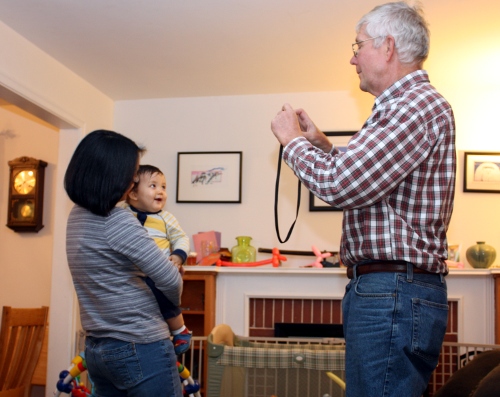 The Pip smiles for the camera.

And just so she's not left out, here's SteelyKid on Halloween, in her Peter Pan costume: 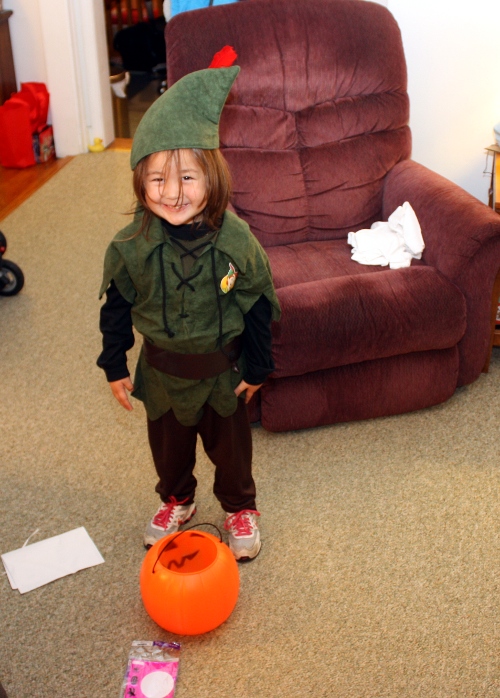 SteelyKid as Peter Pan, ready to wreak some havoc.

She absolutely loved trick-or-treating, and came back with about ten pounds of candy. At one point, she ran across a grassy median flailing her arms like Kermit the Frog and screaming "We're getting SO MUCH CANDY!!!!!"

But today's mostly for The Pip, who's walking everywhere and trying to figure out running so he can keep up with his big sister. He's also got very strong opinions on what he should eat, having an extended freakout last night at dinner where he kept refusing his baby food because he could see a bag of pretzels on the dining room table. Once we gave him some pretzels, he happily ate goop on a spoon in between bites of crunchy salty goodness. And then pitched another fit until he got some of the chicken Kate was having for dinner...

So, happy first birthday to The Pip!

Since SteelyKid got her own cute-photo post last night, it's only fair to give equal time to The Pip. This morning, for reasons that passeth adult understanding, the kids decided to balance teddy bears on their heads, SteelyKid using Bertha the Big Bear (who is just a little smaller than The Pip),…

SteelyKid takes a bunch of enrichment classes at her day care, none of which are explicitly science. I was, however, thrilled to discover that they were doing actual science in her computer class though. The "Featured Image" at the top of this post (sorry, RSS readers, you'll need to click through…

Another busy day, so you get another kind of lazy shot. But, hey, everybody wants to know how the kids did trick-or-treating, right? So here's The Pip's share of the Halloween haul: The Pip's Halloween candy. I weighed both his plastic pumpkin full of candy and the Tupperware container that…

So cute, both of them.

Well you know, if the choice is between chicken and mushed goo... He's demonstrating intelligence.

And I love the Peter Pan photo.