In comments to the post on computer display colors, Will Slaton notes that Mac displays emit polarized light. And, indeed, this is an inherent part of the backlit LCD technology-- the individual pixels are bits of liquid crystal between two polarizers, and an applied voltage causes the liquid crystal molecules to flip between a state where they rotate the polarization of light, and a state where they don't. In one of those configurations, the polarizers block the light, and in the other, they let it pass. By rapidly varying the voltages, you can make the pixels flash on and off in the right way to make us see moving images.

This is, of course, an easy thing to demonstrate, given that I own polarized sunglasses, which I know to be pretty darn good polarizers. So, here's a post to show the effect for three different displays. Up in the "featured image" you can see the basic experimental configuration: a computer monitor, with a pair of shades held in front of it.

Now, that doesn't necessarily look like the behavior of a polarizer, but then, you can really only tell that you're dealing with polarized light by rotating your polarizer to block it. Like so: 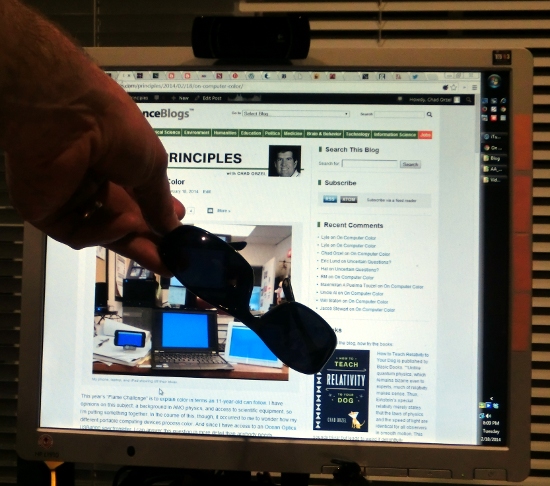 My desktop monitor with polarized sunglasses rotated to block the light.

And just to confirm that this is a polarization effect, here they are rotated 90 degrees, where you expect maximum transmission: 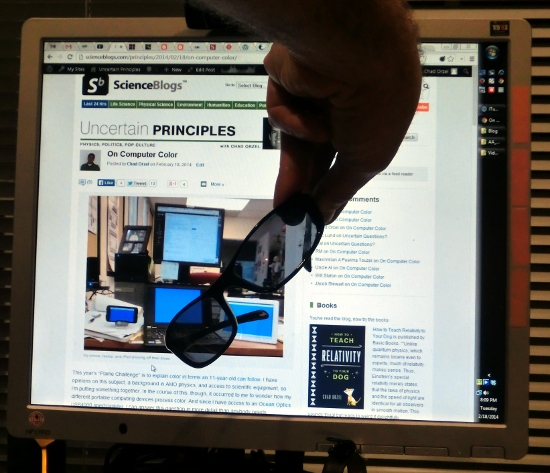 My desktop monitor with sunglasses rotated for maximum transmission.

If you look closely at that, you can convince yourself that there's more light making it through those than the horizontal pair up top. This used my desktop monitor, but the same thing happens with the screen on my laptop-- the light from the display is polarized at an angle 45 degrees from the vertical.

What about my iPad? Here, we run into a design failure on the part of Apple. If I prop the iPad up on its little stand and put the shades in the orientation you would wear them, all is well: 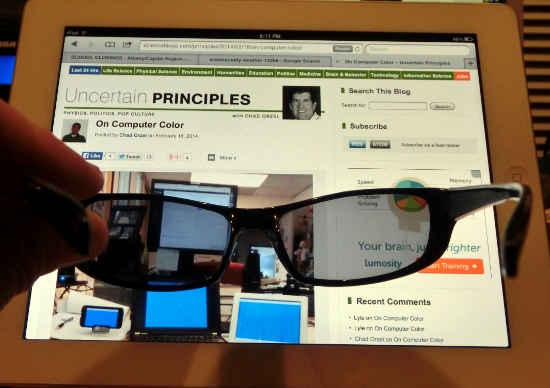 My iPad with polarized sunglasses, as if using it in landscape format.

But if you rotate the glasses by 90 degrees, as if you were working with the portrait orientation, you see: 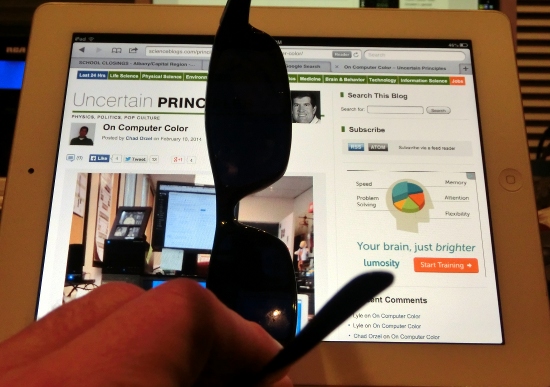 My iPad with polarized shades, as if working in portrait format.

As you can see, it goes totally black, because the polarizers block the light. This confused the hell out of me for a couple minutes the first time I tried to use it outside on a sunny day-- I thought the battery had died, or something. This is, as I said, a rare design blunder on Apple's part-- it would've been much better to orient the polarization at 45 degrees to the sides of the iPad. Not that it seems to have hurt their sales any...

What about my phone? The phone uses a different display technology, based on pixels that directly emit light, rather than filtering the light from another source. This doesn't require polarized light, and as you can see, the display is not, in fact, polarized in any significant way:

Four shots of my phone through polarized sunglasses, showing that there's no angle where they block the light.

So, there's today's lesson on the physics of computer display technology...

How Good Are Polarized Sunglasses?

One of my tasks this week, before heading off to the Caribbean for a relaxing vacation, is going to be to find a new pair of polarized sunglasses that aren't ridiculously ugly. This seems like a decent hook of a physics post, explaining why "polarized" is a selling point for sunglasses, but first,…

I've seen several people link to the Scientific American piece on how to make your own "quantum eraser" experiment, which also includes a list of components and a detailed set of instructions, with pictures. There's a great "living in the future" kick to an article which assumes that you just have…

Why Do Polarized Sunglasses Work?

In the previous post about light polarization, I promised to post an explanation of why it is that "Polarized" is a selling point for sunglasses. Given that sunlight is unpolarized, the only obvious benefit would be that polarized sunglasses will automatically block half of the light hitting them,…

Don a pair of 3-D movie polarized glasses and look in a mirror. Close one eye. ! What would you see if you closed both eyes?