While I have a bunch of stuff in progress, it's been a hectic week already, so I blew off the middle park of the day to go to Thacher State Park and take a hike with my camera. I got a whole bunch of photos from this, and later on, I'll sort them all and put the good ones in an album on G+. for now, though, I have two that are good photo-of-the-day candidates.

When I set out on this hike, I only took my two fixed-focal-length lenses, the 50mm f/1.8 and the 24mm f/2.8. Each of them fits easily in the pocket of a pair of cargo shorts, and I figured swapping between the two would provide a little variety. The zoom lenses I have are bigger and heavier, and I didn't feel like carrying a bag with me.

Of course, as soon as I pulled into the parking lot, I faintly regretted not bringing the whole bag, as there were a bunch of birders there with telephoto lenses taking pictures of vultures and hawks soaring off the edge of the cliff. But, you know, you gotta dance with who you came to the dance with, so I hiked the Indian Ladder trail down and back up the cliffs, and got a lot of nice shots in the woods.

When I got back to the top, though, a couple of birds had moved farther down into the cleft where the trail is, and one got close enough for me to get a decent shot with the 50mm lens: 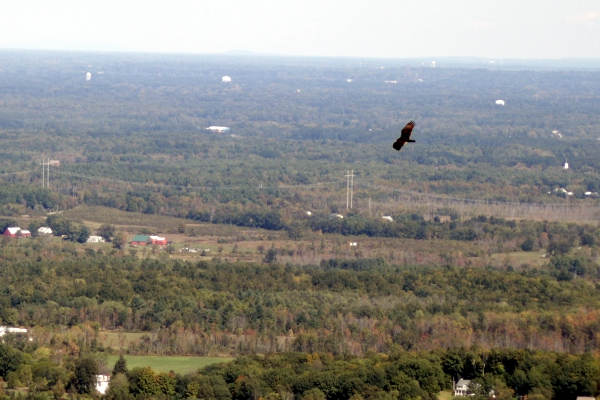 A soaring bird-- turkey vulture, I think-- from the Helderberg Escarpment at Thacher park.

I think that one's a turkey vulture-- in some of the other shots, you can see spread feathers at the end of the wings and that's usually a vulture thing-- but I'm not 100% certain. I was pretty psyched about that shot, with the way it's hanging over the lowlands. But as I got back to the car, a different bird made a couple of passes right over my head: 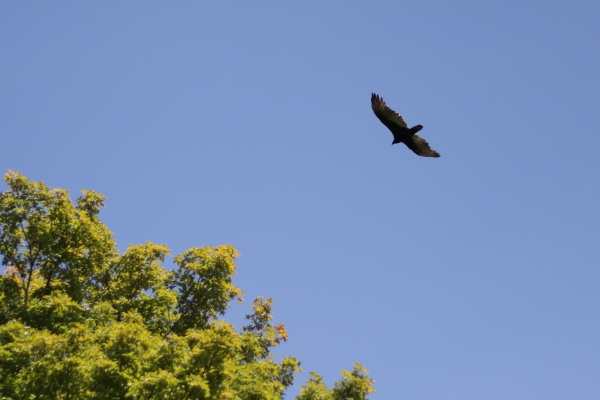 Another soaring bird at Thacher Park.

And that's also a pretty sweet picture. So, we'll call them co-pictures of the day, and leave it at that.

Anyway, it was a gorgeous day, it's a neat park, and I had a great time stomping around snapping pictures despite the constraint of just the two fixed lenses. I'll definitely be going back there again, hopefully when the leaves have turned a bit more. And I'll bring the 55-250mm zoom next time...