SteelyKid's taekwondo competition was the most time-consuming event of yesterday, but not the most stressful. Before we went down to Duanesburg for the tournament, Emmy gave us a bit of a scare.

Emmy is not by any stretch a young dog-- she was a year old when we got her in 2003, so she's 13-- but she's pretty spry. Over the last few weeks, though, she slowed down very dramatically. Initially, I didn't think much of it-- she was unenthusiastic about eating her kibble, but that happens a lot when we get near the end of a bag, and she kept eating treats. And she was moving slowly and stiffly on our morning and evening walks, but again, she's old for a dog, especially one her size.

Yesterday morning, though, she was in a really bad way. She barely wanted to eat her morning treats, wouldn't even look in the bowl of kibble, and when I put the leash on her to take her for our morning walk, we barely got into the next-door neighbor's yard before she planted her legs and Would Go No Further. When I looked at her, I could see she was laboring to breathe.

I called the vet, and loaded her into the car, fully expecting that I wouldn't be bringing her home that day, possibly ever again.

When we got to the vet, he noticed the same breathing thing, and mentioned that her eyes and gums looked pale. He ran through a bunch of stuff-- hooking her to a pulse-ox machine, poking and checking her all over, and drawing blood for tests. After looking at the blood under a microscope, he came back, rooted in the fridge for a bit, then gave her a shot of some sort of steroid (I didn't catch the name). He said the blood didn't show signs of the anemia that sometimes hit German Shepherd type dogs, but there's an adrenal gland thing that sometimes hits older dogs, the canine equivalent of Addison's Disease.

I asked what we should be looking for, and he said "Well, if twelve hours from now she's like a whole new dog, then that would be a good sign that I'm probably right..."

And damn if he wasn't right. I mean, it's not like we rolled back the clock to 2007 or anything, but I dropped her at home and then took SteelyKid off to taekwondo, and when I came back, Emmy was back, too. She had perked up, she ate her dinner without needing to be coaxed, and was downright sprightly on our evening walk. And she's been great today, too.

So, let's hear it for modern (vetinary) medicine, and a good while yet with the Queen of Niskayuna, shown here on our walk this morning worrying that I'm not actually going to give her the treat I have in the same hand as my camera: 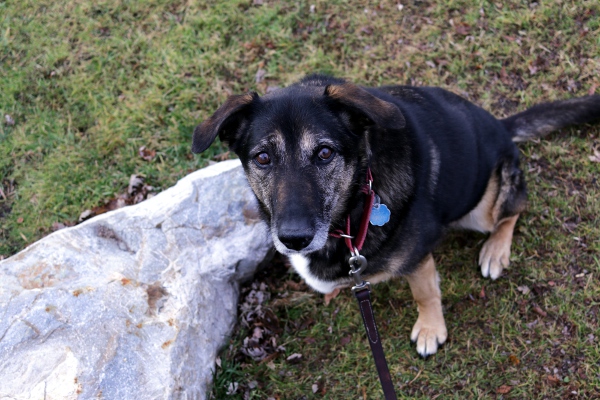 Emmy, the Queen of Niskayuna.

(She got the treat, because she's the best Emmy ever...)

I confess that this made me tear up. May Emmy stay as well as can be.

Long may she reign.

None of us are getting any younger, that said, the place wouldn't be the same without Emmy. People need a good dog to guide and supervised. Good to hear a little medicine was all it took to get her feeling better.

Glad to hear that Emmy responded well to her shot - it's always a worry when your senior dog shows signs of illness. We have a 14 year old Border Collie - mostly still active and happy (apart form her epilepsy), but every so often, something happens that reminds you of her age...