When schedules permit, I like to take the kids to home basketball games at Union. This works out well for everyone, as almost nobody goes to the games, so the kids can rampage all over the gym and get good and tired without upsetting anyone, and we add somewhat to the crowd supporting the home team.

(I'm not sure what the players made of The Pip yelling "DAAAAAAAD! You can't tickle me when I'm way up here!" from the very top of the bleachers, though...)

This also gives me a chance to shoot some different subjects, in keeping with the general goal of this photo-a-day business. Thus, a couple of sports action shots: 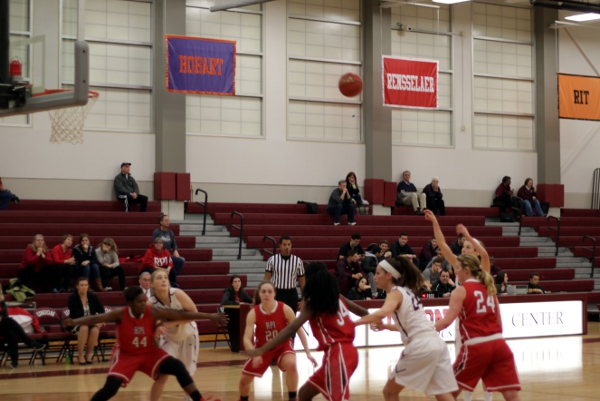 A free throw during the first half of the Union women's victory over RPI. 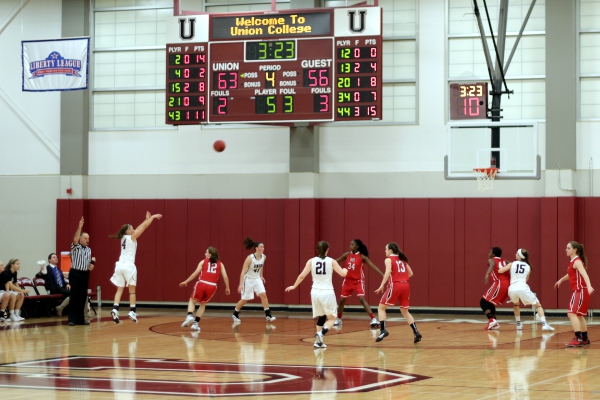 The main take-away from this is that sports photography is really frickin' hard (and not made any easier by the need to keep an eye on the kids to make sure they're not about to run onto the court, swan-dive off the bleachers, or anything else disruptive and/or dangerous). I sort of figured it wouldn't be much different than taking photos of our highly active kids, but when I'm photographing the kids, I'm at least allowed to follow them around, not restricted to the sidelines.

These shots were taken with the 50mm f/1.4 prime lens, because it's the fastest I have, and thus the least prone to motion blur. Of course, the fixed focal length is sub-optimal for this, but a fast zoom lens would cost about double what I paid for the camera, so, yeah...

(It's also not great for taking pictures of the kids, as I need to be kind of far from them to get them in the frame. But I got some good cute-kid material, too...)

Anyway, that's my latest experiment. I can see where this would be a lot of fun, if I didn't also have to ride herd on the sillyheads. They have play-dates this afternoon during (part of) the time when Union is playing Siena; maybe I'll go over with the camera and no kids, and see...