When I arrived to pick SteelyKid up the other night, she and her friends were light-saber fighting with long balloons, which is fairly typical of that bunch. While I gathered her stuff up, though, she stopped and twisted her balloon into an animal shape: 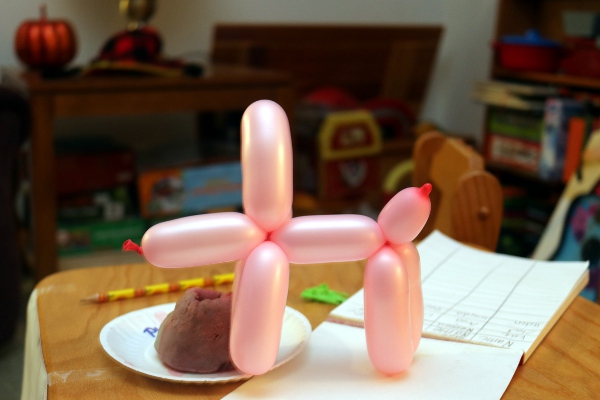 She got a "How to Make Balloon Animals" kit a few years ago, but she doesn't often do anything with it. So I was pretty impressed that she did this completely from memory. (Of course, I'm easily impressed when it comes to my own kids doing stuff...)

The balloon dog (we'll call it a dog....) doesn't quite stand up on its own, so it's propped on one of The Pip's class art projects. They're working their way through the alphabet in pre-school, and the letter of the day was "V" a few days back, so they made volcanos out of clay. And did the baking-soda-and-vinegar "eruption" thing, which made a huge impression.