I've been neglecting the photo-a-day thing for the last week-and-a-bit, but for a good reason: I had a deadline of, well, today, to finish a chapter I was asked to contribute to an academic book. And while I fully realize that actually hitting that deadline is not typical academic behavior, I have A Thing about that, and was going to make damn sure I finished by the end of the month, as I had promised. So a lot of stuff got neglected, to the point where there were a few days in that stretch where I didn't take any pictures at all.

So, you get another catch-up post. I owe nine photos, but I have twelve good ones from this stretch, though a few of those are paired. So I'll somewhat arbitrarily assign numbers to these, and saw that I'm all caught up... 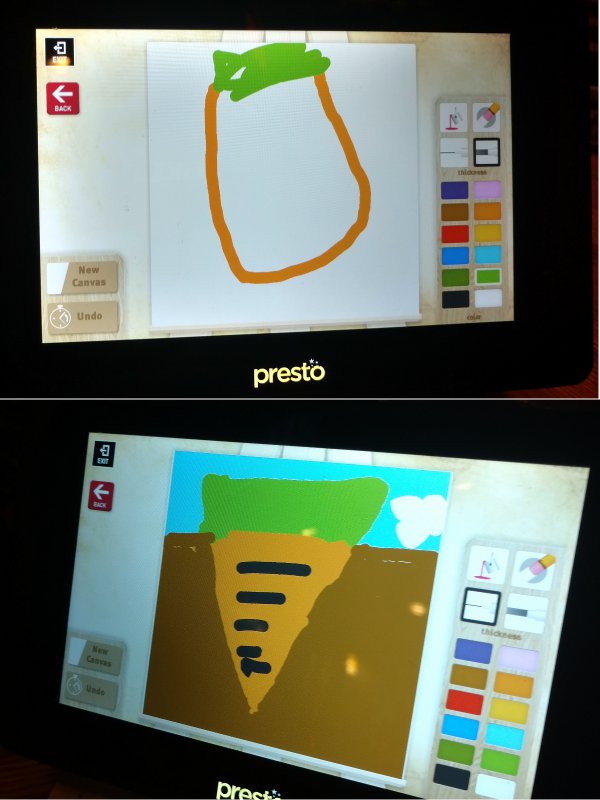 Pictures of carrots. Top by The Pip, bottom by SteelyKid.

The Pip's favorite restaurant is Applebee's, God help us, and one of his favorite activities there is using the little at-table tablet things to draw pictures. He almost inevitably decides to draw a carrot, because reasons, and then insists I take a picture of his drawing. And then SteelyKid has to get a piece of that action, too.

So here are some carrot drawings.

We went to a couple of home basketball games over on campus during this stretch, and the kids have discovered the joy of going outside on the patio right off the lobby and doing crazy things. Here's SteelyKid showing off her frightening agility: 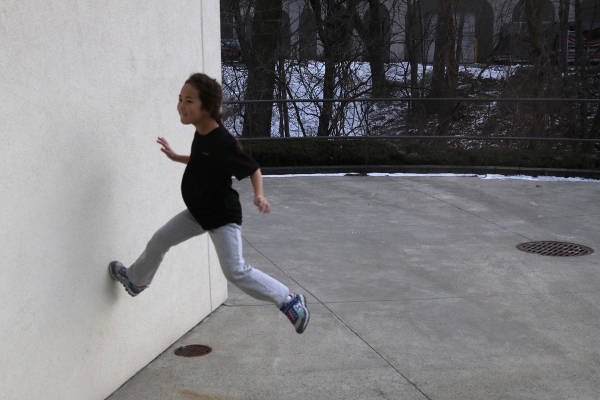 SteelyKid bouncing off a wall.

The Pip doesn't quite have the same grace: 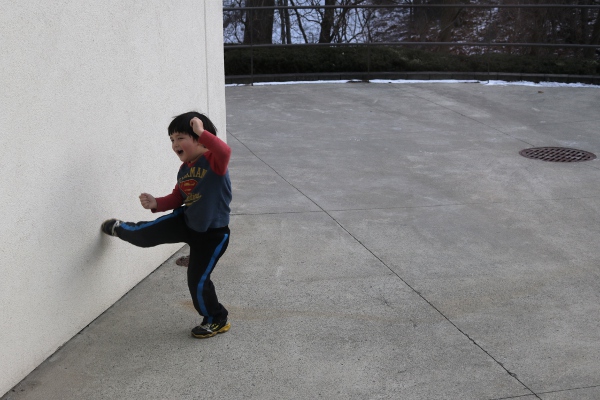 The Pip trying to kick off a wall.

I think I already posted one photo of a woodpecker to this, but here's another: 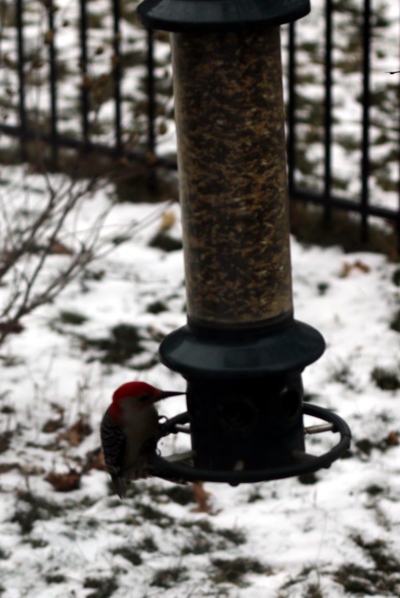 Woodpecker on the bird feeder.

One day we suddenly had a big-ass flock of these quail-ish birds all over our yard: 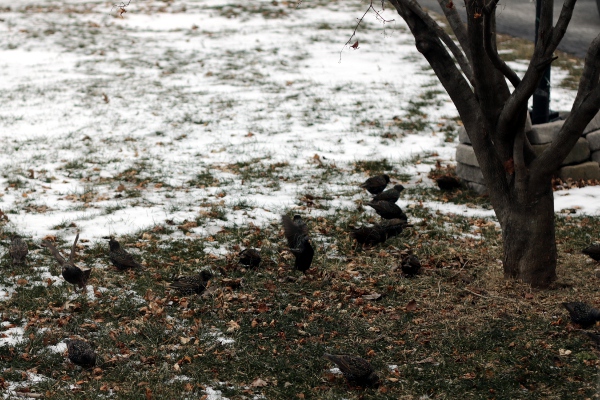 Quail-like birds on the front lawn.

I'm not sure what these are, but when I posted a different image of them to Twitter, the most common guess was starlings, so, probably starlings. I guess. 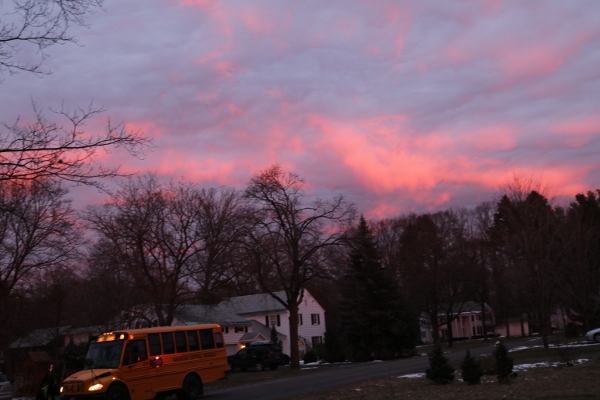 Clouds at sunrise, with the bus picking up the kid across the street.

The bus that picks up the kid across the street (who goes to one of the other elementary schools in the district, as we live in a "flex zone" that can feed two of the five, as needed to keep enrollments balanced) arrives a bit earlier than SteelyKid's which coincided nicely with pretty sunrise colors. This is actually facing west-- the sunrise is behind me, but it's impossible to get a good shot of the sky in that direction.

As I said above, there were two basketball games in this stretch. I got some decent action shots at the second: 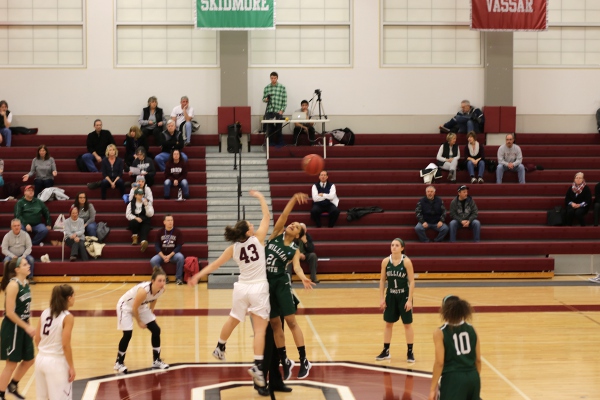 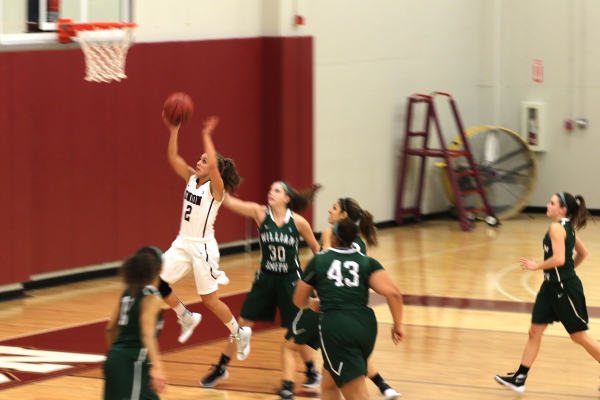 Union's Amy Fisher drives in for a lay-up.

Shortly after the second of these, SteelyKid slipped while climbing up the bleachers and face-planted, scraping up her upper lip. This was not one of the highlights of our week...

I try to limit the number of cute-kid photos in these, but they're so darn cute... 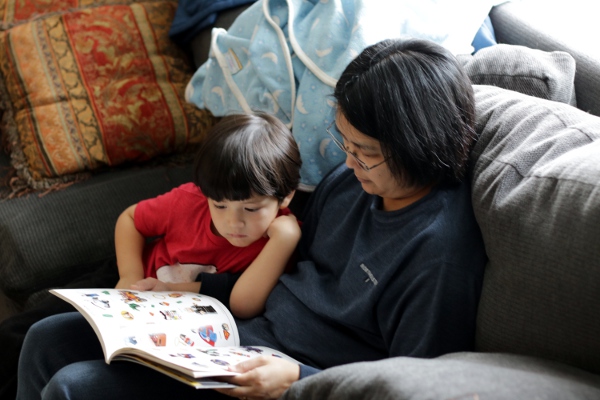 The Pip studying his Lego superhero book with Kate.

SteelyKid has been obsessed with building forts of late. Here's the latest of them: 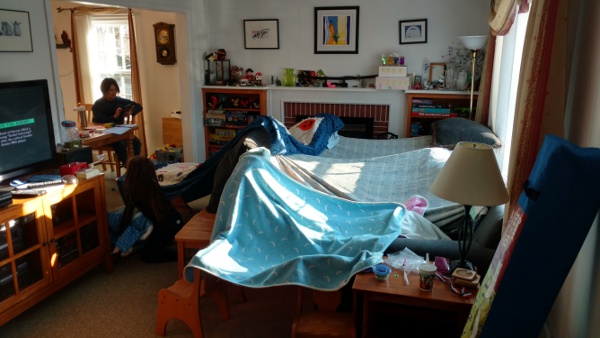 A particularly large blanket fort in the living room.

I crawled inside this one, and made an attempt to capture the inside: 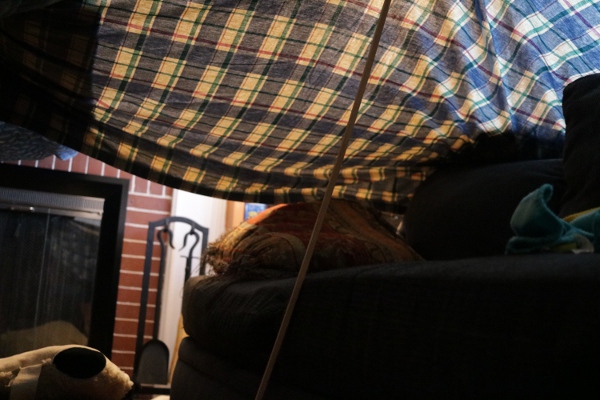 Interior of the giant blanket fort.

We had a big flurry of "secret message" writing yesterday, using a spy kit that SteelyKid got for... Christmas? Her birthday? I don't remember; we've had it for a while. This involved writing in one color, then scribbling over it with red, which vanishes when viewed through a red plastic filter that came with the kit. She and I did a bunch of experimenting to find crayon combinations that worked well, and here's one of the better attempts: 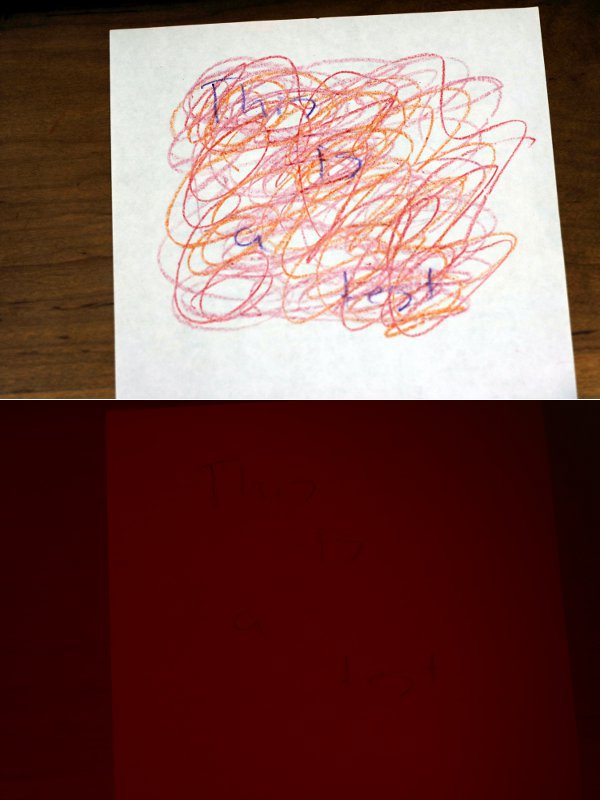 Test of the "secret message" kit; in normal light at the top, through the red filter on the bottom.

And that catches us up through yesterday, assuming I've counted days correctly. And even if I haven't, it ought to be enough pictures to prove a point of some sort. My book chapter will get sent out this afternoon, after which I'll be a little calmer, and expect to resume more regular blogging.