I spent Tuesday flying to Champaign, Illinois, which was probably a big mistake. I should've booked a Southwest flight to Midway Airport in Chicago, and rented a car to drive down to Champaign, but I decided that might be annoying on the way home, so opted to fly the whole way. Which meant a United flight into O'Hare, followed by an American flight to Champaign, both in aircraft that felt like scale models of actual jetliners.

And, of course, there was this: 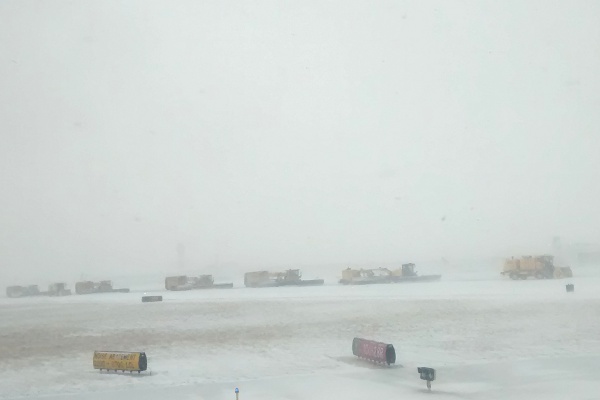 Snow removal trucks on the runway at O'Hare International Airport.

That's from the plane as we taxied to the gate in Chicago, in a moderate bit of snow. The amount of snow wouldn't've made much difference in a small airport, but O'Hare is so overcongested that the slightest issue triggers a massive set of cascading failures that ended up with my original flight to Chicago delayed over an hour, my original flight to Champaign canceled outright, and the later flight I was rebooked onto delayed by more than an hour. Charmingly, the last of the official delays was put into the system after we started boarding (I got an email notification on the plane), which I suspect is a sleazy bookkeeping dodge to maintain some "on-time" percentage.

I did finally make it, better than four hours late, having spent a long time sitting in an airport bar, but that's one of the least pleasant air travel experiences I've ever had. And I get to do it in reverse tomorrow, with the Chicago forecast again calling for light snow. Joy.

I should’ve booked a Southwest flight to Midway Airport in Chicago, and rented a car to drive down to Champaign

I'm not sure that would have been the better option. You would have had to deal with Chicago traffic going in and out of town, and that doesn't fare a whole lot better in snow than airline schedules at ORD. Plus there's the risk of a semitrailer jackknifing on the interstate, and then what do you do? Once you're out of Chicagoland, alternate routes become scarce.

The best option would have been to connect through some other airport, such as Detroit, but I don't know if that's an option going to Champaign or from ALB.

Or my thought fly to Indianapolis and drive from there it is actually 10 miles closer to Champagne than Chicago, according to Google maps, and in Indianapolis airport you are already on the west side of town.

Does your remark on the size of the airplane imply a comment on the comfort within? I never find seats too crammed, but I'm 1.65 (that would be 5'5" approx). Most people above 6' I know complain about air travel.

@Lyle: Driving to Champaign from Indianapolis would be a sensible move if Chad were originating in an airport that had nonstop service to IND. But ALB is not one of those airports. Also, MDW is on the south side of Chicago, so the advantage is not that great.

@prosaica: Most likely both flights were on regional jets (either Bombardier's Canadair Regional Jet or Embraer's comparable products). The only reason that wouldn't be true is if one of the segments (most likely the one to Champaign) was on a turboprop aircraft. Chad is, IIRC, just short of two meters tall, so he would have trouble standing in the aisle of these planes (I have that trouble with the smaller Embraer jets, and I am at least 10 cm shorter than Chad). Seat pitch on regional jets is no worse than on mainline aircraft with the same airline.

Maybe the in-flight movie will be, "Planes, Trains and Automobiles?"

The in-flight movie should have been "Airport" (set at a fictional O'Hare during a blizzard), but I'll bet that has never been shown on an airliner.

I'm 6'1" and can barely handle flying on regional jets or in sardine class (on normal jets) despite having skinny legs. I have no idea how you do it.

My worst trip ever involved ORD after a blizzard that reduced them to one runway. Holding pattern for over two hours, but they did serve us free drinks. (This was a long time ago!)